Sorry, I have already posted this in the mobile section of the forum, but think it may be in the wrong place, as it isn't mobile related! 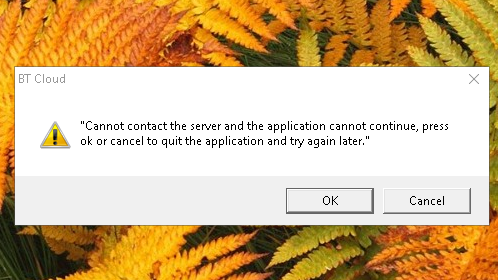 I have 4 computers in my household (strictly 2 houses, one of which has BT Broadband and the other Plusnet), 3 desktops and 1 laptop, all of varying ages and all running Windows 10.  I updated one of the desktops (which runs of BT Broadband) to the Windows 10 Fall Creators update last Tuesday (17th October) and ever since then, the BT Cloud App has refused to open, giving the above error message.

I put it down the the app not being fully compatible with the Fall Creators update and thought it would resolve itself in due course.  Resinstalling the app didn't work.  The apps on all the other computers continued to function normally.

At some point during the early hours of this morning, the BT app on another desktop closed (which runs off Plusnet Broadband) and also now refuses to open, again with the same error message.  This desktop has not yet been offered the Fall Creators update, so nothing has changed from this perspective.

Why can I no longer sync via the BT cloud app?  The app on the laptop (BT Broadband) and the other desktop (Plusnet) continue to function for the time being, neither of which have been upgraded to the Fall Creators update.