Simply because the HH3 guide recommends channels 1, 6 or 11, so I thought that if any neighbours were having similar problems, they would probably choose one of those channels. I therefore decided that it might be better to go for something different.

Simply because the HH3 guide recommends channels 1, 6 or 11, so I thought that if any neighbours were having similar problems, they would probably choose one of those channels. I therefore decided that it might be better to go for something different.

Which, if it works, is the right thing to do.

here abit from it

If you're using Channel 1 and your neighbor is using Channel 2, you're both putting plenty of power into each other's channel. Even the best receivers have difficulty dealing with this level of "adjacent channel interference". Whatever a receiver can't understand, ends up as "noise", which can reduce performance.

On the other hand, when both your WLANs use the same channel, the CSMA/CA mechanism described earlier, as well as other Wi-Fi coordination techniques, can operate as intended. Although you both will be contending for a share of the same spectrum (and bandwidth), your requests can be coordinated for most efficient sharing. In other words, you may not get the speed you want, but you'll get reliable operation.

I have read your post and by all means feel free to disagree.

Theory and lab testing obviously have a great value but as often crops up, real time testing and use in the field very often throws up different results.

If a channel other than the "standard" 1,6 & 11 works better for a user then he is quite right to use it.

and theres no point to it, your both still putting power into each others channel and reducing the effect point of the wireless mechanism to do what it was designed to do

if that person is always streaming video then it will effect u more. if another channel has 2 people on it who hardly use it then u will getting better throughput yourself

finding that out is really a hassle though.

at present from all the expert and theory and from my own testing im going with what the article says.

the wireless mechanism isnt there for no reason

so we'll just have to disagree 🙂

I have checked the situation with inssider and no-one else is anywhere near the channel I am using (they are either using 1 or 11), so I seem to have found a good solution. The HH3 would not connect when set to Smart mode, so it cannot be that smart.

and theres no point to it, your both still putting power into each others channel and reducing the effect point of the wireless mechanism to do what it was designed to do

if that person is always streaming video then it will effect u more. if another channel has 2 people on it who hardly use it then u will getting better throughput yourself

finding that out is really a hassle though.

at present from all the expert and theory and from my own testing im going with what the article says.

the wireless mechanism isnt there for no reason

13 channels aren't there for no reason either.

so we'll just have to disagree 🙂

channel 5 is the strongest point but it will spread out over  channels 4 3. (acutally spreads a little more but is considered to have negligable negative effect so isnt shown)

even pippin will agree to that i think 😉

i used to think oh yes lets use 13 etc

dosent change the fact it will get interfence from 11

the CSMA/CA mechanism works better from what i can gather..  i would like this prooved to me with my own eyes 🙂

the more u move of , for eg 13 the more its seen as noise that it cant understand and so degrades where as if on 11 it will  'do its thing' and leave u with a more stabel connection

the fact u mention 13 and say its not there for no reason make s me feel you dont understand the argument of why that is worse, or just think its not the case

if even to see if what experts say is best, compared to pippins point of view, which of course hes entitles too.

but read up on wifi and see what u think 🙂

Unfortunately you are relying on old data for what you are trying to posit. Also you are not considering the new generation "N" routers which  span channels differently to what you have posted.

Here's a screen of my Belkin PlayMax on channel 6 set to lowest channel span. 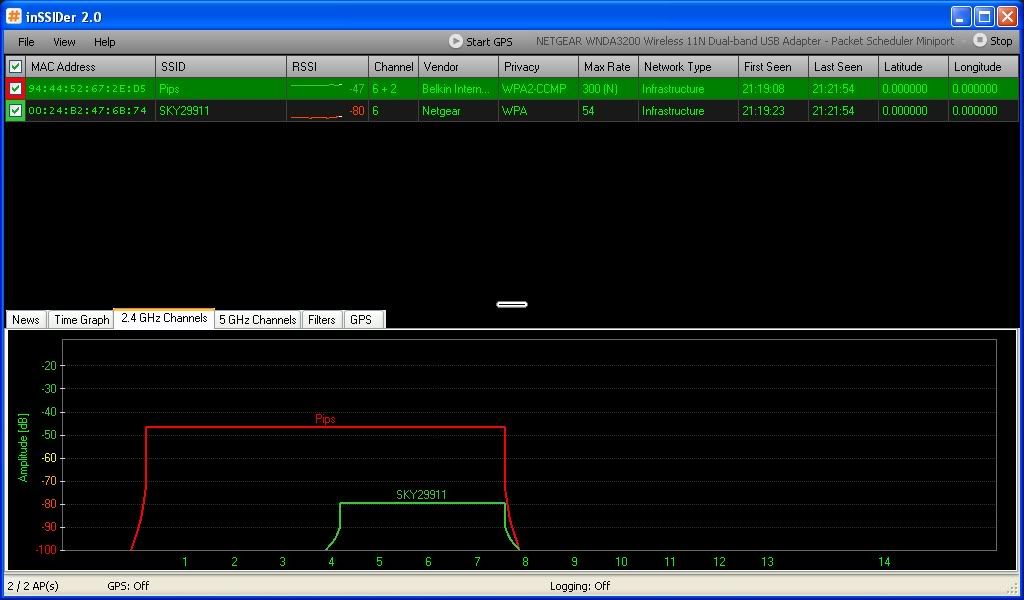 and here on the higher one 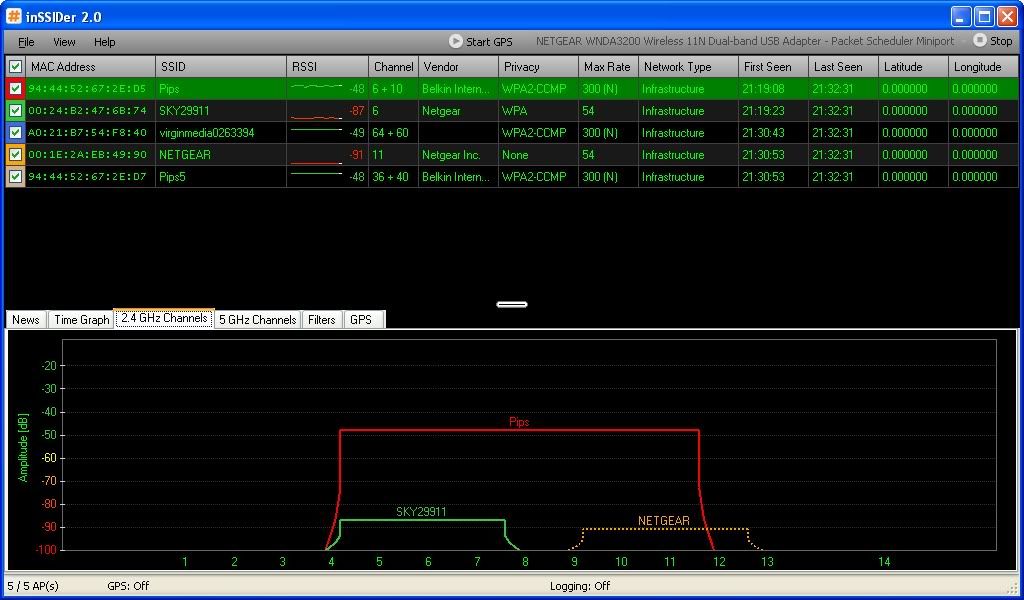 I know the graph shows I should however we have tested it to make sure it isn't. We've tested their throughput with my wireless switched on and off and there were no noticable differences. Les is next door to me and Michael is 3 doors away.

I will admit the tests were done several months ago as if I am using wireless I use the higher 5GHZ N frequency as I'm the only one who has it and my cordless phones, microwave etc can't affect my connection in any way. 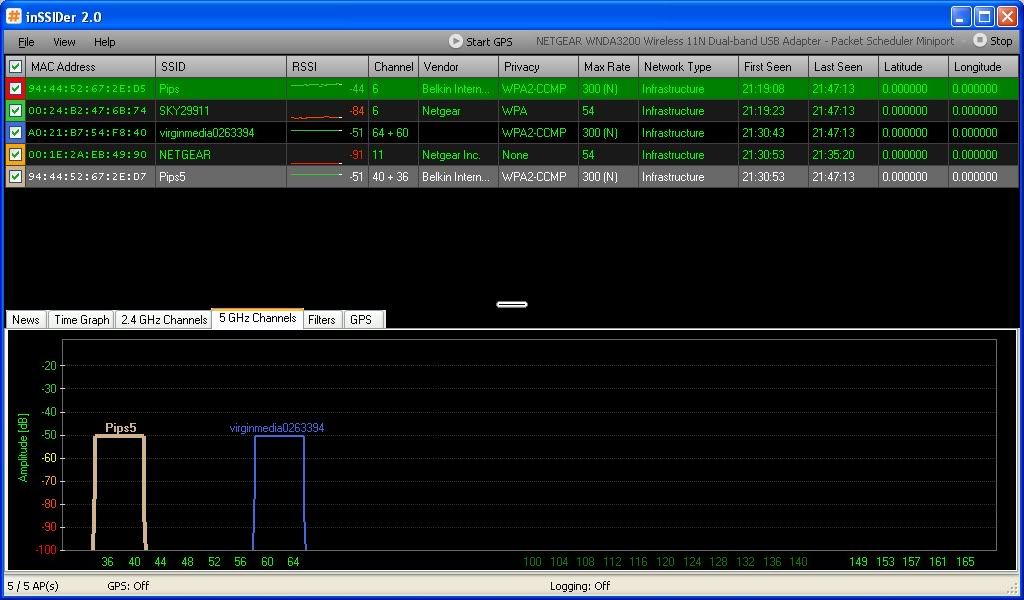 Both wireless connections shown are mine.

its not old data at all and therefore your statement is misleading poeple, which makes me feel u are not getting it at all and shows some lack of understanding or an error was made.

the diagram is from the article ref below

and show the 2.4ghz 20mhz channels for N

they dont span differently in this situation

look it up to confirm

and even more selfish and bad manners, annoys me greatly people dont understand this in high density areas  🙂

there was call back to stop it from being certified

read up on this

However, when using 2.4GHz, using 40MHz isn't nearly as easy since the channels were already overlapped in 11b and 11g mode.

Effectively to use this feature, you will block 7–9 of the 13 channels and, of course, ch12 and ch13 aren't available in North America. So yes, it's possible that your neighbors will hate you if you turn this option on. This is why there was a lot of pushback at the end of the final IEEE 802.11n ratification to entirely ban 40Mhz in 2.4GHz. That didn't happen as 40MHz is still appropriate for some situations (ie: a warehouse) but the bottom line remains, enabling 40MHz in the 2.4GHz band isn't a good idea for dense residential areas.

so if u are on 40mhz in 2.4mhz it will be interfering with neighbours on multiple channels, much more than single band N

this would no be the case if they were closer or stronger signals, which u know 🙂 but others may not

nb there is some argument that in uk u can use 4 channels of course it again relies on people sticking to these channels to be good to everyone, this is for g not sure how N would be effecting ill make apresumption that it will be similar but needs backing up

in most WiFi deployments in the UK it is sufficient to adopt the
convention of using the four non-overlapping channels (in fact, in many situations, three channels are
enough to achieve a non-overlapping topology, so an even greater buffer between adjacent cells can be
achieved). However, there are scenarios when even four channels are insufficient:
• in higher density deployments
• across multiple floors of a building
• where external interference precludes the use of one or more of the ‘usual’ channels.
In these circumstances it may prove possible to use partially-overlapping channels at the price of only
minimal overhead in terms of traffic collisions. The rule of thumb is to maximize the channel separation
between cells as much as is practical, and to be aware that once the channel separation drops below
around 25MHz (three channels-worth of buffer), you will start to experience degradation in performance.
Unfortunately, wireless deployment is something of an arcane art, and each case must be evaluated on its
merits and tested in situ to see whether the impact of the increased overlap is acceptable.
You should also bear in mind that reducing the power output of your APs is another way to decrease the
number of interfering cell boundaries,