My BT infinity connection was established 2 weeks ago and initially I was attaining speeds of 75Mb and was quite stable. Two days after the connection was set up, my phone connection stopped working although broadband worked fine. I called BT which promptly sent an engineer to repair a fault in the line. At the same time, I noticed that the broadband speed had decreased do ~68Mb. Then every day after that, the Home Hub would reboot (usually overnight) and the connection speed would drop by a small ammount. As it currently stands, it reports 54 Mb which is a reduction of more than 20Mb over the initial value.

Is there anything that can be done at this point to bring it back to normal/prevent it from slowing down further? 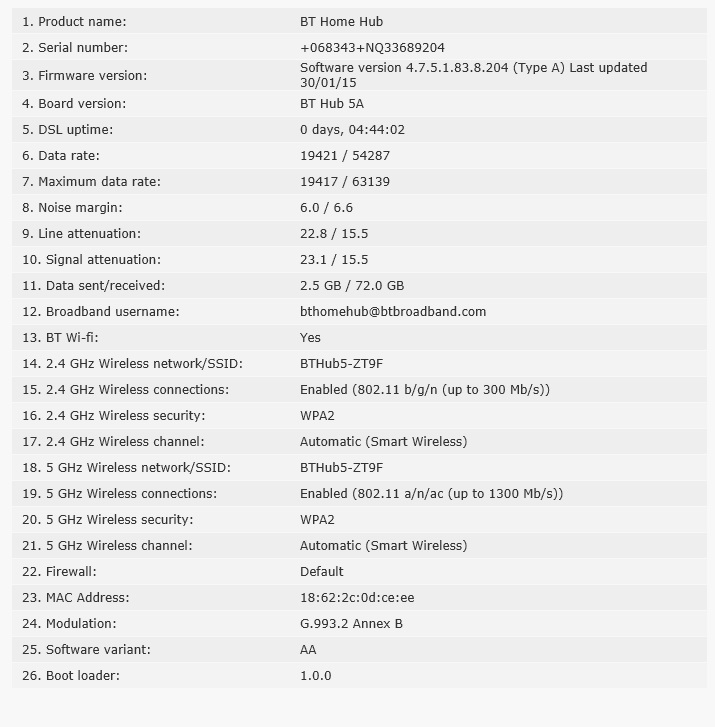 I just noticed something in this diagnostic that is quite strange. My home hub registers as having rebooted during the night (about 4 hours ago), while I was sleeping, but it has already downloaded 72 GB since then. That cannot be right as I just turned my computer on 30 min ago!

So this shows the potential of my line goes up to 80 Mb which was what was estimated when I ordered and approximately what I had for the first couple of days of broadband service. However I am now sitting at 53 Mb and if the trend continues it will be even lower tomorrow. Please help.

I am sorry but I must insist.

Still no improvements to the connection. I can literally see the cabinet from my back window (it cannot be farther than 100 m. And the dsl speed checker still states the potential of the line to be 80Mb.

How much noise can be introduced in the line in ~100m? I am more inclined to believe that a fault in the line is causing the slowdown, but right now I don't have the time to wait on the phone for BT customer service. If a moderator cannot pick this up, at some point I will have to, but given my previous experience with the service installation in the first place, I would really prefer not to have to go through the same ordeal again.

I have just tried the quiet line test. I don't really know what to expect, but all I can hear is a quiet background buzz. Is that normal?

Noise on the line indicates a fault.

Just did what was suggested. The automated line checker reported no faults in the line. The broadband downstream speed is still at 53Mb/s, and has been for the past few days, so at least it is not decreasing anymore, but that is still far away from the initial 75 Mb/s, in a home 100 m from the cabinet...

Thanks for posting. The key here is stability. Once DLM picks up the line is stable it will automatically increase the profile but will take longer than normal ADSL broadband. If you don't see any improvement over the next week drop back and we'll look into it for you.