I've had BT Infinity 2 for about 6 months and the VDSL negotiated speed has dropped from 65MB/17MB when first installed to 49MB/5MB now (this went down in 5-6mb chunks over the last 4 months), until settling at exactly 49MB

WHen the engineer put this in, he had to return to the cab in the street about 5 times and the install took several hours (I was one of the first in the village), so that leads me to think, has he 'sticky taped' something with my connection.

I use a Draytek 2860N router and the connection is good.

I can't but feel though, I've lost 15MB Down and 12MB up somewhere.

Done all the usual self-help stuff (Master socket only, no extensions, Uptime on router is 3 months, other than 1 power off I can think of)

We only have 1 cab in our Village (I estimate, its <150M if I could get to it in a straight line)

My mother-in-law lives further away from the cab than we do, and gets better speeds by a long way (78 Down / 19 Up)

Is it worth me pursing an engineer visit to get things checked out ?

Hi,
I am not saying this is the cause but you may find Mark Heath's article very interesting, particularly since you say you were the first to be fibre enabled like he was  :-
http://www.increasebroadbandspeed.co.uk/2014/vectoring-crosstalk-crisis
Best regards,
dfenceman

Thanks for looking into this 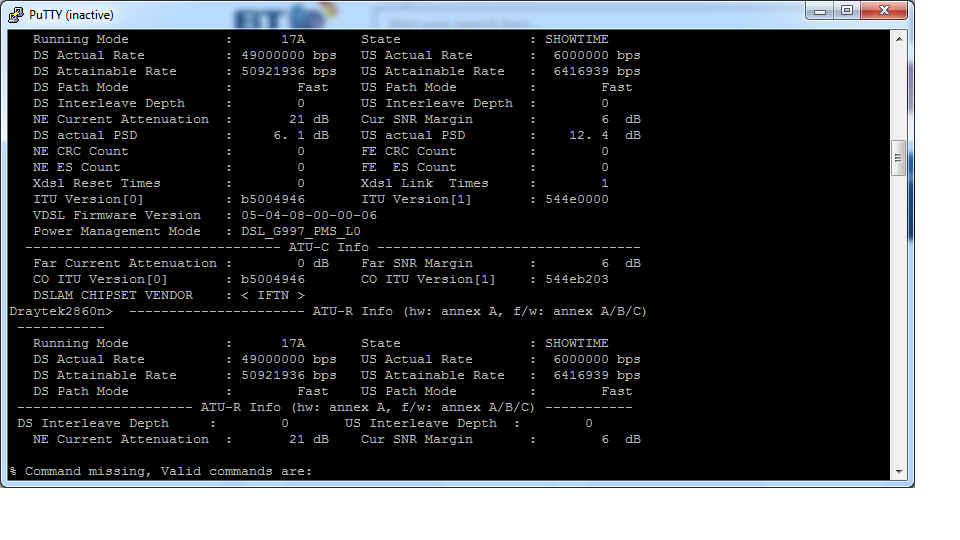 What does this link say - delete your number https://www.btwholesale.com/includes/adsl/main.html

If your mum gets higher speeds than you then based on your original speed  you may well be on a B range line with crosstalk having an impact.

Your stats show the snr to be fine and no errors.