We've had BT Infinity installed for quite a while now, and from time to time the connection would drop or the speed would be slow, which is fine - however, for near a month now the speed has been slow (while decreasing each day) along with the stability of the connection getting worse.

After coming back home, I soon realised that the speed was slowly decreasing (despite it being a low speed to begin with). I'd check one day, and the speed will be 'x' amount. The next day, I do another speed test, and it's gone down again. Orginally I assumed it was just having a fit, and would go back to normall after a little while as we know how technology can be sometimes. This however, was not the case.

It has now gotten to the point where our download speed has gotten down to 4.0MBP's, and considering we're suppose to be on a 76MBP's package, that's a supposedly 19th of our total speed.

What's even worse is that the connection will stay up for about 30 minutes, and it will cut out for a few seconds or so and go back to normal. There doesn't seem to be a pattern of when it goes down, but i've yet to see a steady connection for at least 1 hour (affecting both wired and wireless connections).

@_Xaero_ I'm really sorry to see you're having problems with your broadband speed. Please can you follow the instructions in this guide and post your speed test results and router stats.

Have you tried connecting to the test socket to see if this helps with the drops in connection? The dropping connections will result in your broadband speed slowing down as DLM tries to stabilise the connection.

Thank you for the response.

1). Below is the speed test from the BT wholesale site.

2). When conducting the Quiet line test, there was a faint sound, and some audible crackles did occour. Not very loud, but still noticable. 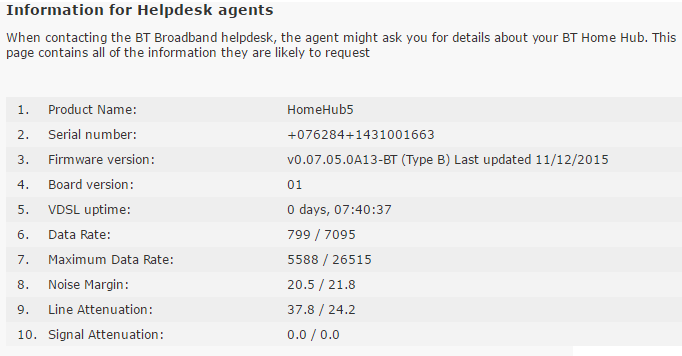 @_Xaero_ Thanks for doing that, your noise margin is quite high. Do you get any noise on your land line if you call 17070 and chose the quiet line test option? Also if possible can you connect your hub to the test socket to see if this helps with the disconnections as these are the likely reason why your speed has dropped.

There was some noise when conducting the quite line test, yes. Also heard several crackles too. I shall use the test socket and see if the it helps with the disconnections.

@_Xaero_ noise on the line can cause connection problems, if it's still noisy and disconnecting in the test socket you might need an engineer visit.

@_Xaero_ you need to connect your DSL cable to a micro filter then connect that to the test socket.

I've connected a mirco filted now. I will see if the stability improves.