So my high ping times to EA Fifa servers have been well documented here. I tried explaining to lots of customer support that my ping times are overly high for the service I am paying for (36 a month). If I play net door on my neighbours Virgin connection everything is great.

Anyway on January 2nd and 3rd I done my daily tracert tests to EA ( Checked every day last 6 months) and I was shocked. There were no longer any nodes in the results being routed via paris through Level 13.net. Instead of my usual Dundee> Ealing>London>Washington>california routes my packets were being sent straight from LOndon to Washington .

The result? My ping had decreased to 90-100ms  and every game of Fifa was perfectly playable. I was so happy playing the game I forgot to screenshot  the results but 100% this did happen. It just shows that If BT managed its routing for that specific traffic/IP , there would be thousands of Fifa players who would be happy and stop moaning here.

Anyway after the 4th or 5th I checked again as the game had became unplayable againg and low and behold it was back to routing via 3 nodes in paris adding another 10-20ms onto the total ping time.

This has illustrated to me that BT could make a perfectly good gaming service to Fifa if they wanted to but choose not to. I will continue to highlight this problem and gain support and publicise it until enough people complain and BT try and do something abiout it.

I am having similar issues with PS4 and any EA related game. BT sort it out. It is not EA servers, it is something within the BT section of my internet.

How about some traceroutes?
--
To say thanks for a helpful answer, please click the white star
0 Ratings

nterested in what a decent ping using bt infinity to ea servers is, heres mine. I dont have much trouble with lag on ps4 fifa 14 at all. 120ms seems a little high. 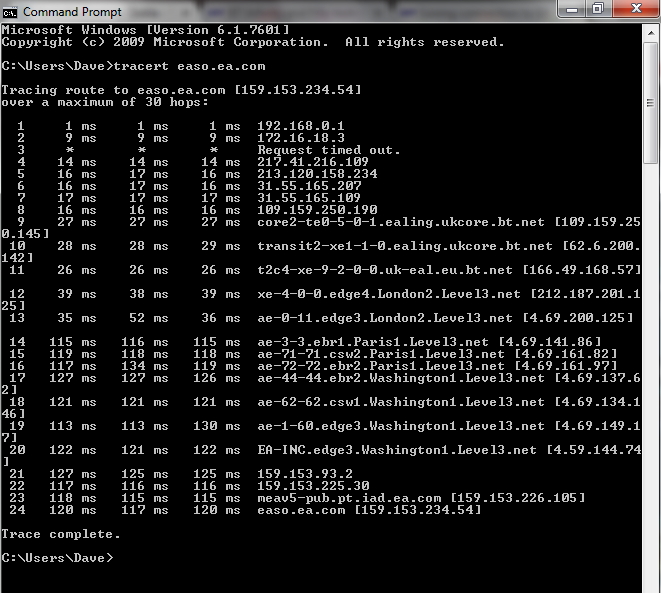 Something definitely wrong here is the result of a trace route from Virgin Media: 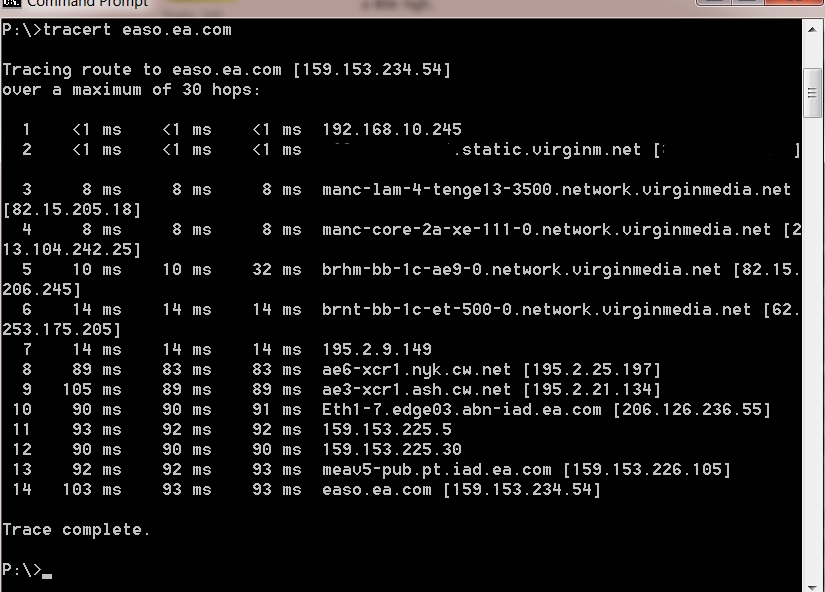 Yep a few months back the game played perfectly then around christmas time everything went to pot. I get lag in most games now, BT denying it's a routing issue is a joke when that Virgin user above shows his only takes 14 hops.

A ping of 120 over a distance of just over 5000 miles is quiet reasonable regardless of how many hops.

Typical fail response, it's nothing to do with the ping.

Maybe try playing the game and seing just how bad it is on Infinity.

What's it to do with?

The routing it takes to get there, look at that Virgin traceroute.

FIFA has been a joke on BT for the past month or so now, they definitely changed something as it used to work fine and my mates on other ISP's don't have issues. Today is especially awful, can't even find a game properly.