Try my profile to see if it's there. If accessing via mobile you might need to select the full site option to see the link.

Have just done so, thanks loads Stuart. Here we go again....
0 Ratings
Highlighted

As I put in the other thread - I am also in Forest of Dean having the same problem - perfect download and upload during the day... 6pm onwards download speed crippled - less than 10mb, upload is normal though in evenings. I've had openreach out who reset the line DLM profile but no help.

Next steps - BT are sending a "BT Wholesale network engineer" out to the exchange in whitecroft on Saturday 10th to see if there is anything there he can do - I think by the amount of people in different parts of the country seeming to have the same issue with slow evening speeds, unrelated to DNS, its probably a bit further up the chain than an exchange in the F.O.D but I'll keep you updated with what happens for me.

Hope we can both get our speeds fixed sometime soon!!

Yep, totally agree. It's congestion somewhere. I'm on the Lydbrook exchange and when I had the problem before I had friends on the Lydbrook, drybrook and cinderford exchanges with exact some issues and all 3 of them want back to normal speeds exactly same time as me. 3 months after logging the initial fault.
0 Ratings
Highlighted

@ray_dorset wrote:
Wrexham is 100 miles from the Forest of Dean.

My point being that it's not just affecting the FOD exchange area.....

My point being it's probably easier to see which areas are affected and fix them individually rather than trying ti fix the entire country at once.

I see there was another report of problems in the Wrexham area so you're not alone.

Yes, I've seen that thread this morning Ray. There are others I work with on the same exchange as me (not the main Wrexham exchange, but a smaller one in a large village just outside of Wrexham) who are also having dire slowdowns in the evenings - to the point last night where my son said the internet eventually just died, and he had to reboot the router... and this was at midnight!

To the OP, sorry to add absolutely nothing to your issue, but just thought I'd chip in to highlight the fact it's affecting other parts too. As our exchange has only been fibre-enabled a few weeks, I very much doubt it is congestion on the exchange. In conversations with various neighbours in my street, I've yet to meet another person who is actually aware it was even available here. I think it's something on BT's mainframe network that's causing the issue.

A friend who's having the same problems has had an OR engineer out to his premises and has confirmed there is no hardware issue at his house, but he is getting umpteen calls to identical complaints, and they're all just with BT - none of the other ISP's seem to have the issue. 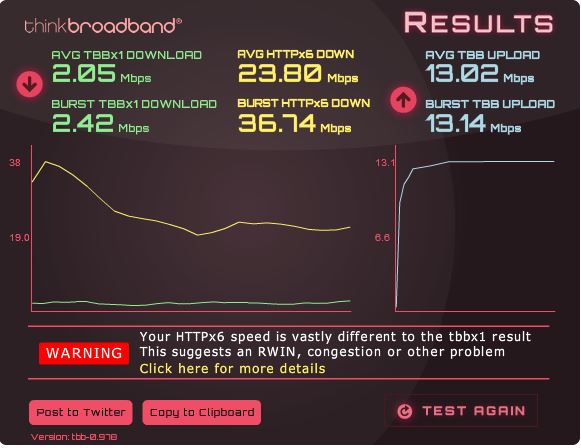