BT Openreach engineers keep visiting our building and keep disconnecting our line, even after numerous complaints.

Here is what happened so far.

On Wesneday 29th January 2014 we finally got connected after 3 month of waiting. When we were connected, we were told by our engineer there was only a limited number of connections from the DP to the Cabinet.

Saturday 1st February 2014, we were unable to connect all weekend. Spoke to somone called Zaryab and he confirmed there was a fault. An eingeer visit was scheduled for Monday 3rd February 2014.

On Monday 3rd February 2014, the broadband started working again. The engineer came to visit as planned, did some tests and couldn't find any faults on the line.

Thursday 13th March 2014, our phone line and broadband went down. I logged a fault on Friday 14th March 2014. I also checked with the landlord of our building, and discovered a BT Openreach engineer had visited for another flat in our same building on the day we were disconnected After they finished, they left our buildings DP looking like this: 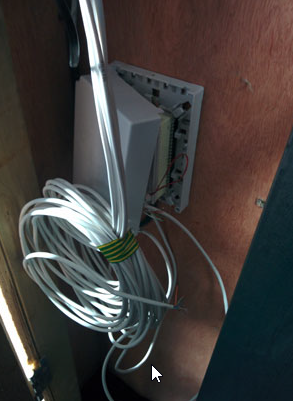 I had concluded that we had been disconnected in order to connect another flat in our building. I contacted BT to inform them of this, I spoke to Ahmed, Rajja, Rakest (Manager) and Abhi (Manager), to try to escalate the issue.

On Saturday 15th March 2014 I also received a call from Conner in response to a tweet we made. I explained to him the situation and he said he would speak to Openreach regarding this.

On Wednesday 19th March 2014, we had a visit from a BT Openreach engineer as planned. He confirmed the engineer who visited for the other flat on Thursday 13th, had indeed disconnected us in order to provide a link for another customer. The engineer restored our connection to how it was before this, and made a note on the line that if another flat needs to be connected they need to run another cable to the cabinet. On the same day, I received two follow up called, one from Conner and one from Rackesh. Concerned that we might go through the same ordeal again, I stressed the issue multiple times and asked for it to be escalated to BT Openreach to ensure if another flat is to be connected in our building, they must provide more connections from our DP to the street.

Needless to say, on Tuesday 25th March 2014, we were indeed disconnected again. I proceeded to go through the same process, logging a fualt with Nizan (Who even after seeing our notes and me explaining the situation, still insisted on my going through the same checks over again).

Now it is Wednesday 26th and I am still without internet. The fault is logged to be fixed by this Friday (29th), but I have very little confidence that even if it is fixed, I will not go through the same ordeal next week.

On top of our initial 3 month wait, I am now 9 days without broadband in my home, and I have had to take 4 days off work. As a software engineer who relies on the internet to work evenings and weekends, this is highly frustrating.

Welcome to the community forum and thanks for posting!

I'm sorry for the problems you've had with your service.  It doesn't make great reading to be perfectly honest

No need to worry as I can help get things sorted from here.  Click on my username and under the "about me" section you'll see the link to get in touch with us.  Please include the link to this thread when you complete the form and whenever we've received your details we'll take it from there.