My socket is this one, looks like the one you posted, but without the top socket:

I cannot understand why there is no test socket, as that bottom section should plug into a back plate, where the main incoming line terminates.

Something is wrong with the wiring, or that is not the master socket, but an extension instead.

Are you sure that is the only socket, and its the first one that the external line comes into?

There appears to be nothing behind, which makes me think its an extension.

You're the one who posted "I cannot understand why there is no test socket, as that bottom section should plug into a back plate, where the main incoming line terminates."


You're the one who posted "I cannot understand why there is no test socket, as that bottom section should plug into a back plate, where the main incoming line terminates."

I suppose its not clear from the picture, how is it that they are getting a connection if its unplugged?

Can you confirm that that last picure I copied of yours, is how you have it connected, and it is working like this, or were you just showing it removed, and there was no broadband connection at that time?

If the OP still had a connection when the picture was taken then the problem is the internal wiring.

If there was no connection why take the picture before connecting to the test socket?

Only the OP can enlighten us.

Apologies for the confusion. That socket certainly is the Master socket. I have no others in the house, nor have any need for them.

The two desktop PC's in the house connect directly to the router through ethernet that I have wired down the wall cavities. The router connects to the filter (along with the telephone base unit), and the filter plugs straight into that master socket.

This socket was installed by a BT (likely Openreach) engineer around 3 years ago when I moved in, he directly drilled through the wall at the back of it to thread in the external cable.

This pic I posted when just connected to the normal faceplate socket was to show how it normally is day to day, and show off the full front of the socket itself clearly, as there was some confusion as to the type:

(Not sure how you're getting those images to upload, when I try it litterally says: "This file is too large. The maximum file size is 333;" this file is 2,570K". I've tried multiple different file types and sizes, and I'm simply clicking the Insert/Edit Image button. As you can see from earlier in this thread, it used to work fine).

Now in the following picture, I unscrewed the bottom half of the faceplate, and plugged the filter into the Test socket at the right side. It IS there and I did have a connection at the time, (through the Test socket). As I mentioned the noise was actually slightly louder, though speeds were around what I expected based on what it was synced at. After I was done I replaced the front faceplate and plugged back into the normal socket at the front, as that's how I have it normally.

If you look in the red-circled part you can see the filter plug underneath going into the test socket. It's just that the part of the faceplate (that seems to plug into the test socket itself when fixed on?) is obscuring it a bit. The wire that's shown is what I presume is coming straight through from the outer wall, and is why I couldn't get a fantastic picture as I could only pull the faceplate so far out to show what was behind it.

Let me know if there's still any confusion and I'll try and get you a clearer picture with the faceplate off.

Multiple full-on disconnects are still happening, so I'm hoping to ring up and report the line fault some time this weekend when I actually get some time at home in the daytime. Still sounds like a constant whooshing, very rarely a high-pitch whine or low buzz.

Try changing the channels in the hub settings. I had this issue when I first got infinity, and thats how I solved it.

Surely that's only for Wifi though? Both my PCs connect by ethernet, only our two phones connect by Wifi.

Also I'm not even using the SmartHub at the moment. Due to the problems I was having when I first made this thread way back when, I bought a TP-Link Archer VR2600. Which seems good but of course I'm now getting the same problem again, which means it's likely the connection rather than the router.

Well as I ended up not in work today, I rang 151, reported noise on the line / possible line fault. Didn't mentioned broadband.

The guy said he couldn't hear the noise himself (though his environment was noisy so it's unlikely he would have), however he immediately understood what I meant when I described it (low, windy hiss), so it does seem a common / recognised noise or problem.

He did some line checks but that couldn't find anything wrong. He then had me connect ONLY the phone to the socket, and check, and then just the phone to the Test socket, I heard the same noise each time, (as I described, the low, constant hissing of wind outside / air con style noise, with the occasional crackle or high-pitched whine.

Therefore he's booked an engineer visit for this Saturday, so hopefully that guy can find a fault. Interestingly there's apparently no charge if he CAN'T find a fault (I was always under the impression that there was?), only a £129 charge if he DOES find a fault, AND it's with my equipment, or that BT's equipment on my property has been damaged in some way.

I presume the guy that's coming will just be a standard line engineer yeah? Do I mention to him that my broadband has been cutting off or not? Or only mention the line noise.

As to my broadband, it's been terrible today, it's been disconnected 20 times again just within a two hour period, and it's still doing it around every 10 mins or so. Speed has dropped quite a bit now. Max for my line is 80/20, and I got around 74/18 when it was put in, now I presume due to the disconnections well.. 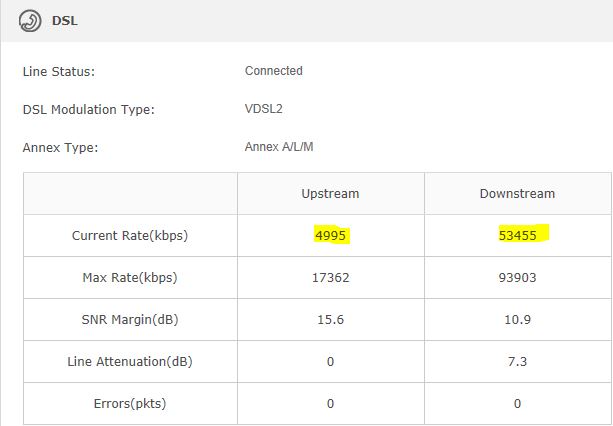 (Interesting that this pic loads into here fine. Seems it's just ones taken on my phone it doesn't like.)

You are correct, it will only be a line engineer that attends so it's pointless mentioning broadband to him.

Once the line has been sorted out your broadband should stabalise and your speed improve albeit slowly. Your SNR is an indication that DLM has taken action in attempt to stabalise your connection.