I recently moved to a new build and signed up for a YouView box, BT broadband (at the time they said infinity wasn't available) and phone and also opted for the free sport channels. Having read around the marketing hype I placed my order.

After a few communication issues with the builders and BT my line was installed and I connected the YouView box to my BT Hub. I noticed that the BT Sport channels were not displaying on my TV guide. I read around the FAQs and updated on demand players, upgrade software and retuned the channels (many times!) - no luck. Phoned BT and they said that it was because the line hadn't been activated yet and they should appear soon after. Several days after receiving the confirmation email from BT saying everything was now set up I tried again - no luck.

Further research on this forum revealed that BT sport isn't available for a YouView box on standard non-infinity broadband. I phoned BT to check and was passed through to someone more technical minded and he confirmed that to be the case. He then subsequently offered to upgrade me to infinity (little more than two months after my original order) for a mere £26 a month plus "activiation" charges (that's worth an entirely separate rant!). I declined.  I then tried ringing again to see if a different agent gave a different answer - after some checking he confirmed that was the case and again offered to upgrade me to infinity. Again, I declined.

I then sent him the following link (http://bt.custhelp.com/app/answers/detail/a_id/45378/~/bt-sport-over-broadband-explained) where is clearly indicates that the BT Sport channels should be available over broadband and only the HD versions required infinity... that confused him somewhat and he went to speak to his "supervisor". Apparently there will be an upgrade in the coming weeks that will allow non-infinity customers to have the BT Sport channels over YouView.

I am not feeling that optimistic and feel that it was only said to get me off the line so let's wait and see. BT ... we are not impressed - sort your act out and make it crystal clear to customers and your staff what should be working and when.

Hi, you can only have BT Sports over normal broadband if you are not in an Infinity area. If Infinity is available to you then you need to upgrade to Infinity.
0 Ratings

Suggest you read this thread. At least one customer already has the service enabled.

As StewM says, it looks like the way BT are playing it is that the Sports over ADSL service is only available to those who can't currently have Infinity, not those who choose not to have Infinity. Of course for many people that means they would have to pay more for the Infinity broadband service just to get the 'free' BT Sport. That's life in a commercial world I guess.

Which seems so wrong, surely it should be up to the customer which way they want to receive the bt sport channels, surely if copper multicast is enabled they should be able to order the sports over the youview box.... It's just one way to make money out of a customer who doesn't want fibre (I for one want fibre when the street cabinet new cabinet goes live)
0 Ratings

It might depend on how BT Retail are paying BT Wholesale for the TV Connect multicast service. They might just pay for either the Fibre Muticast or the Copper Multicast service in any particular area, but not both as that might cost more. That would keep their costs down.

Just because a service is listed as available for your line according to the BT Wholesale checker doesn't mean that any particular ISP (such as BT Retail) is taking that service and offering it to customers in that location. Don't forget BT Wholesale supply services to many other ISP's as well and act at an independent level. 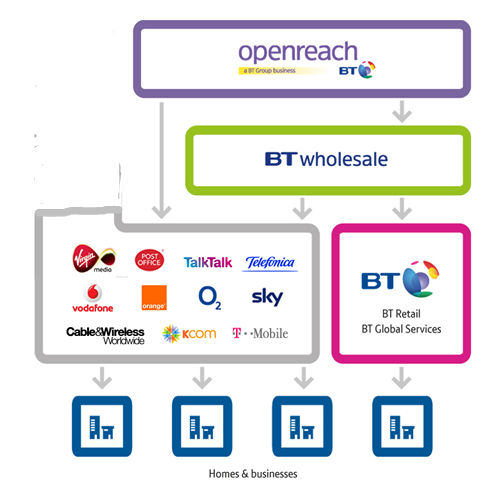