I've had a very very difficult time with BT regarding our broadband service. To put a long and annoying story short, we're being advertised that we can get FTTC at our property (our cabinet is enabled) with speeds of around 40MBps (according to BTs website) and around 70MBps (according to the BT wholesale website) and our ADSL broadband can only get speeds of around 1.5 MBps. Although we've tried twice now to get FTTC and it simply doesn't work, which has also been confirmed with numerous engineers so BT Openreach is advertising our speeds wrongly. But why is this? We have also been told by the BT FTTP department as well as the bt wholesale website that we can get FTTPod installed to our home. To which after numerous calls to BT, I have been told that openreach have came back to them saying that we can't? Although I was told it was going to be installed by the 15th of September? Again, very misleading. There is a housing estate not far from us which is connected to a different exchange that has FTTP installed and I was told that we would be connected to that during my first phone call, but then after I spoke to other BT staff, have been told that i wouldn't and the cable was going to be installed from our current exchange which is around 4km away which didn't make any sense at all. So really I would like to find out why we're being advertised these things to only find out that we can't have them and is there any way of it being installed anyway? We simply can't live with 1.5 MBps speeds and have become very frustrated with the customer service provided by BT, it's simply shocking.

FTTPoD is not available on the retail market as it is aimed at businesses. Installation fees start at about £1000 and increase the further away from the fibre node you are. 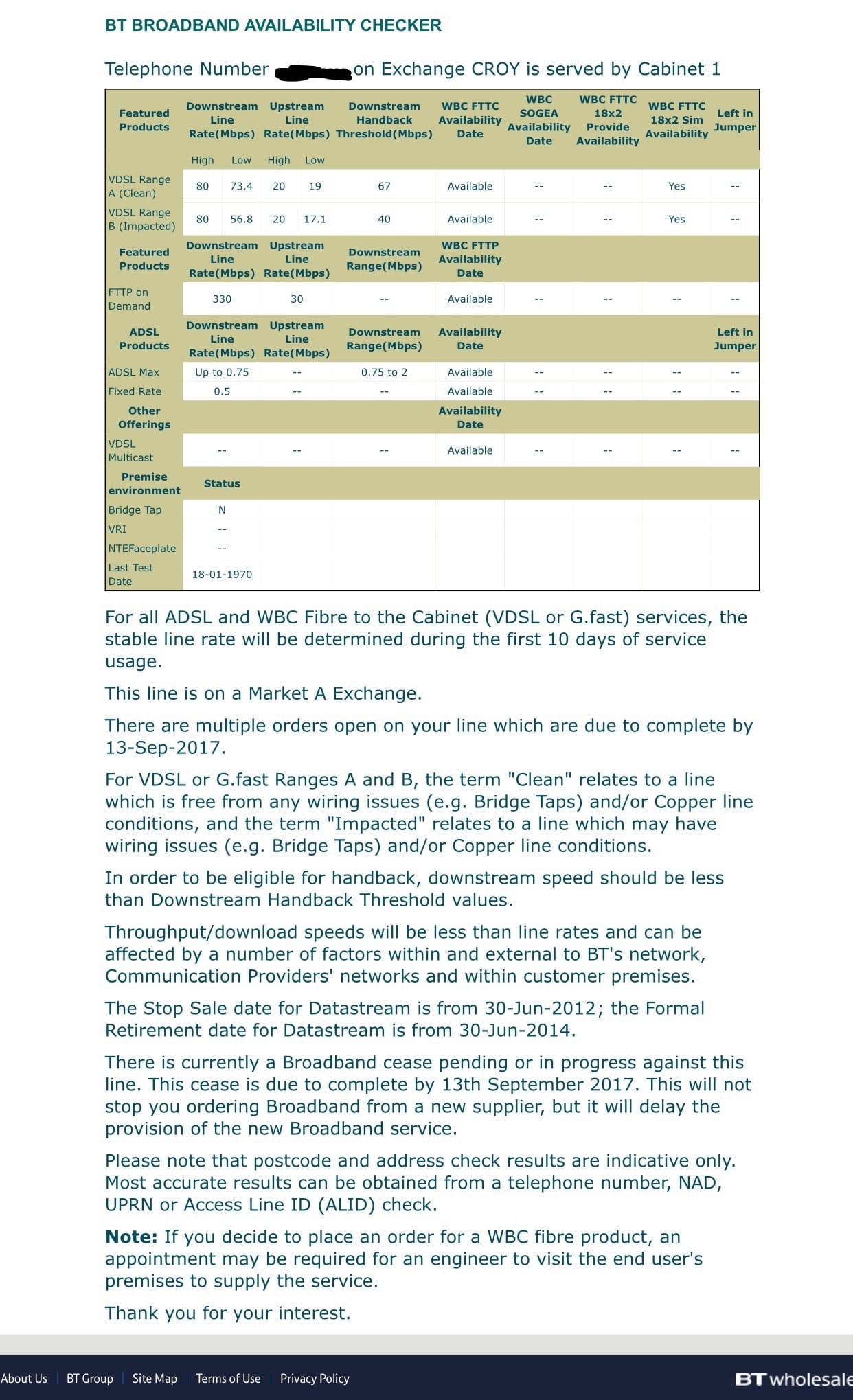 There you go. Thank you for your reply!

Also forgot to mention, with regards to FTTPoD, I didn't realise that was for businesses only but while the checker does say it's FTTPoD that's available, the BT FTTH department didn't mention the oD part and simply said that we could get FTTP/H to our property with free installation
0 Ratings

Hi @luk3du and thanks for posting.

Your checker results state there are multiple orders on the line which are due to close on the 13/09. Have you placed any orders recently?

Hi there David, yes we have an order with EE to go to ADSL broadband as BT messed up our order completely which resulted in us leaving although apparently it's still in the process of being cancelled
0 Ratings

Thanks for confirming that @luk3du. I think the best option at this stage would be to wait until the orders clear and then check again.

@DavidM so basically allow the order to complete on the 13th and then once that's done come back to this post and sort things out from that point?

@luk3du That's correct. Once the orders clear we'll be able to take a look at this for you.