There is another thread running on 'Stuck IP' which seems to be addressing a specific user - hence a new thread.

Last year BT Openreach replaced overhead cable due to noise, line dropping on voice calls etc and since then I have had actual speeds of >6Mbps. I also took up the BT Youview option to watch HD on-demand which these speeds could achieve.

Since the entire village had a Broadband outage (fixed), I cannot watch any BT Youview catch up without buffering issues. Running the 'standard' BT line speed test shows the max speeds (8128/448) and actual data speeds of <2Mbps. First thoughts were that maybe a busy time of day.... All other devices turned off and with just one PC connected via Ethernet and still the same. Restarted Router etc and this line only has a Homehub and one phone (which I have also disconnected while running speed tests to try and prove nothing at my end is interfering.

Anyway, I found the BT Wholesale test which showed the IP Profile at 2Mbps.

Tried a 'chat' session with support who tried to convince that I needed to change my Wireless channel to 11 which would speed things up, despit my telling them that I had disconnected additional PCs and was runing a single PC wired via Ethernet!

Gave up on that route and called support. During a 30 minute call, they said they have 'reset' some things and to restart the router in a sequence of holding the reset button for 30s, then immediately after releasing it to remove the power cable for 30s, then restart and that I would notice an immediate improvement which would get even better after a few days.

This morning, still very slow and IP Profile still at 2Mbps. Looking at these forums, if I understand correctly, a MOD can get involved and get the openreach team to reset the profile?

If it helps, I attach a screenshot of the BT Wholesale speedtest from this morning as well as the router stats since the suggested power cycle.

In fairness, the telephone support team did send me an SMS and if I replied they would call me back to avoid the queue. However, can the retail support group actually do anything if this is an exchange or line issue?

Any guidance appreciated as I am paying for the BT Youview service which is unwatchable and I use cloud storage which is just crawling..... Thanks. 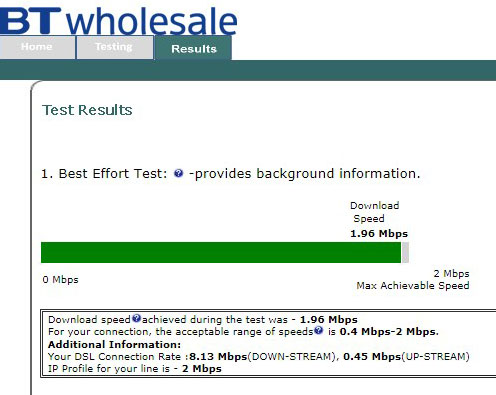 welcome to the forum

Sorry you're having problems with your broadband speed.  I can help with this.  Click on my username and under the "about me" section you'll see the link to get in touch with us.

If you could also include the link to this thread when you complete the form that would be great!

I have not found a 'reliable' source, but is there somewhere where the stats such as noise, attenuation etc are discussed and what the acceptable, or rather target' limits should be and typical 'causes' as to why they may be bad?

Just been to a neighbours and many people in the village seem to be suffering slow speeds since an outage a couple of weeks ago (local exchange) - even though it was fixed. After 2 days since a power cycle of the hub the IP Profile is still at 2Mbps (as it has been for a few weeks now).

My Hub is an older BT Hub2 and I have a new Hub4 here which I am considering using - is it better at line management and QoS? Or should I let things run their course and see if the Mods pick up my submission and try to reset the line at the exchange? Hub 2 is not good at port forwarding and home network tab shows unavailable page!

Thanks for any feedback in case there is anything I can try locally (unused devices all disconnected and only one phone on the line. Silent test runs OK) - all a bit frustrating trying to use the BT Youview service (for which I am paying) with constant buffering every few seconds....

at present you have the max connection speed of adslmax and as such your noise margin is highr than normal 6db but in your case that is good as it gives you 'margin in hand' for the time your connection is upgraded.

you can read about stats here http://www.kitz.co.uk/adsl/linestats_explanation.htm

Go to solution
Thank you to David for resetting the line and sorting things out. Speed now back to normal and very pleased!
0 Ratings

another stuck profile fixed by mods - good PR for forum