I have had BT infinity since 2013, and it has been at around 55mbps since then, until around 3 months ago, just after local flooding in my area, when the speeds dropped to around 30mbps, not thinking much of this, I left it, then the line started intermittently dropping out, around 40-50 times per day usually, and I seem to have the core speed issue fixed as I get 39mbps sometimes, but this will drop out and each time it drops out I get around 10-15mbps when it comes back up, I have had numerous engineers, who all do the same tests, saying that they come back fine, although a few have faced drop outs during these tests (which were conducted at my master socket) but no line errors aparrently, and getting a good 40/10 Link, but as soon as i plug my router in I get issues again, have tried my HH5 and an open reach modem (an ECI b.focus one) to no avail, everyone seems to not know what the issue is caused by or how to fix it, and I am on the phone to BT daily, doing the same routine tests, going in circles.
0 Ratings
35 REPLIES 35

are you using the test socket with a new filter to eliminate your internal wiring? 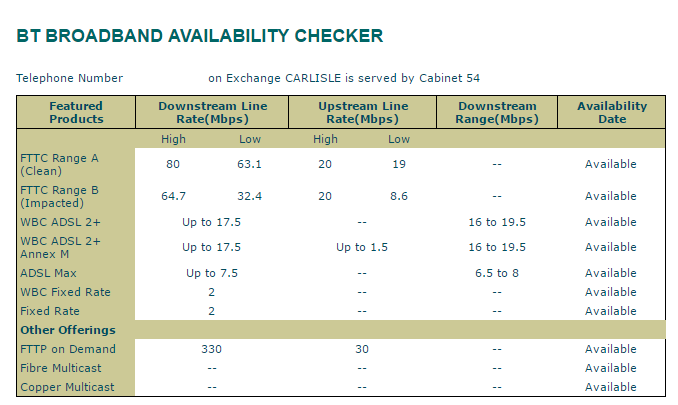 I can confirm that all tests are conducted over WIRED connection, and I have my HH5 connected directly to my new Mk3 faceplate on my master socket, that an Openreach engineer installed on the last visi

is the low connection time due to connecting hh5 ?  your noise margin is very high at 15.1db as normal about 6db (your nomal may be slightly higher) sugegsting there have been drops/resets in connection possibly caused by line noise

have you tried test socket with a filter insead of SSFP to see if that helps stability?  did you try quiet line test?

The low connection time is due to a drop out earlier, and the connection has just dropped out whilst trying to post this, making me post from my mobile, I have seen this figure up to around 30db before on my line whilst having these issues, and I have tried with a filter to no avail, and also have tried a quiet line test and it seemed fine
0 Ratings

Hello, yes I understand this, I have been contacting BT daily for the last 3 months, and they have sent out multiple engineers who say they cannot fix my issue, I have a case manager also who says that they don't know what is causing it and cannot fix it, I have had 2 more drop outs since my last post, yet BT says there is no issue, don't know where to go from here 😕
0 Ratings

If you have had a few engineers and they cannot solve problem then let's see if mods can help. They will post a contact us link here.

After completing the email NOT PM then you join a queue of other customers waiting for mod help. The mods will get back to you in 5/7 working days either by phone or email

Thanks for your posts and welcome to the community forum!

I'm sorry for the connection problem you're having with your BT Infinity service and that it has been going on for so long.  I appreciate the amount of your time you have spent contacting us about this and that you're no further forward.

You can send us over your details and we will give you a hand from here.  Click on my username here >> RobbieMac << and you'll see our contact link on the left hand side underneath my profile picture.