I watch ufc and have only recorded 1 successfully since having bt in march I am getting extremely annoyed as no one seems to know why it won't record it's on occasions recorded prelims but will not record main events just fails. Can anyone help!!
0 Ratings
10 REPLIES 10
Highlighted

T2100 as for software it's all up to date!
0 Ratings
Highlighted

The DTR-T2100's are all running a 4 month old software release that was so faulty they blocked the older boxes going onto it, but we are all stuck with it and its IP recording problems.

Just for completeness have you noticed the ones that fail immediately follow something that completes ok as this seems to be the biggest issue...

Have BT acknowledged there's a problem yet? Would be nice to know they're working on a fix for these issues.
0 Ratings
Highlighted

Nope, BT have said nothing...I have raised it but don't expect to hear anything as they have had plenty of opportunities thus far already and not even acknowledged a single one. Yes there is a sticky about recording problems and a form to fill in but there has been no recognition that they are now looking at it and it is very non-specific....

To be honest they acknowledged the fault when they refused to allow the H3 boxes to move onto the 17.x software until the recording issue was fixed. Seems they don't care as much about it's customers on the G4 boxes though 😞

The DTR-T2100's are all running a 4 month old software release that was so faulty they blocked the older boxes going onto it, but we are all stuck with it and its IP recording problems.

I'd pretty much decided my G4 IP recording failures were down to series record issues, wait for a software update and I'll be sorted I thought .... however ....

Just back from a 2 week holiday to the IOM for the TT races. Every eveining I was away ITV4 had either a TT related program or race highlights show. I set each and every one for the first week as a single recording (listing only covers 7 days) and from the last available listing as series record. Also set two indiviual recordings on IP channel 420.

The other thing was when I returned home the G4 wouldn't power up from standby with remote, I had to switch the mains off/on to get it working again.

That could possibly be a slightly different problem. Did you have any other recordings that completed or did (for some reason) the G4 box crash (power loss, BB loss etc) and that takedown its ability to record anything from that point on...

1 basic thing would help with all this...a decent report on why things failed rather than just 'Failed'.

No successful recordings, all TT and two IP recordings were all that were set. The 4 recordings in TT 2014 were all failures too. As you say no failure reports available. 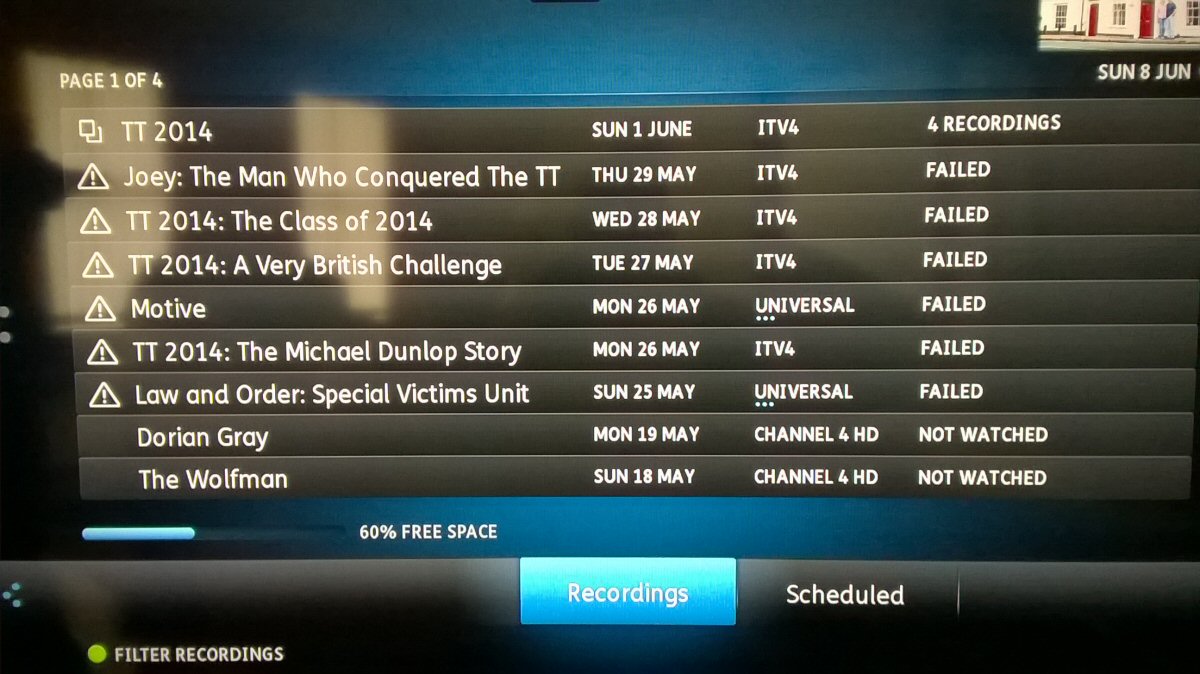 But I would tend to suggest that something failed miserably either before or during the first recording that made the box lock up totally (hence not being able to power up) for them all to fail like that. Still an issue that may need fixing but I would guess probably a slightly different one to just the software.

But without proper codes or reports for the failures its anyones guess....

0 Ratings
Related Topics
BT Sport internet channels are not recording
Why can I not record bt sports?
Recording BT sport not possible?