Can software on a Mac computer be the cause of DSL outages?

I have been having DSL connection problems for nearly 3 months now. It has been a saga which - if you're interested, is described in more detail here:

Anyway, I have surprisingly just had uninterrupted service for nearly 24 hours now and that is probably a first in three months. However, there is one factor at play here: I have switched off my iMac and not turned it on since the DSL connection resumed. I am beginning to suspect that software on the Mac is actually responsible for killing my DSL connection.

This may seem far fetched, but I experienced a similar problem a few years ago on a Virgin Media cable service: as soon as I attempted to upload anything with Dropbox software, it caused a major system crash (and because Virgin Media's broadband connection goes via the set-top box, it also crashed the TV service, requiring a full re-boot to get back online again). This was an easy problem to identify and solve because I was able to replicate the crash just as soon as I attempted to upload via Dropbox. I uninstalled Dropbox and never had that problem again. (I have not re-installed it either, since moving to BT).

If this could happen on a very high speed fibre-to-premises connection, then it makes me wonder if something similar is going on with my slower VDSL fibre-to-cabinet connection from BT. A search on the Internet yields many results containing posts from people who are convinced that Mac software was killing their DSL connection (Photostream comes up repeatedly as the likely offender).

So my question to the community is: has anyone come across this issue before? Is it a known issue? Can software on a Mac computer be the cause of DSL outages? Especially software that is attempting to upload to the cloud.

Or is this just a co-incidence?

Any comments for or against will be most welcome.

I will know for sure later when I turn the Mac on, but right now (half-term and three kids at home) I want to stay connected (and see if any outages arise while the Mac is off).

Computers can crash any router under certain conditions.

Was the MAC computer connected by wireless, or Ethernet cable?

IPv6 can cause issues, so diabling it may help.

There is an iMac which connects to my guest network via a wireless link to a wireless client, as it would not connect to wireless.

The guest network goes through a managed switch with prevents the MDNS packets from the iMac, overloading my home hub. I am on ADSL, but the same would apply to Infinity.

Thanks for the response, Keith.

I've tried ethernet via a powerline connection, WiFi and (since last week when the telephone socket was moved right next to an outer wall, right next to the iMac) a direct ethernet connection from the modem into the iMac. I've also tried two different modems: the Smart Hub 6 and a Netgear Nighthawk. I can always connect, whichever method or modem I use... it's just that it's a lottery as to how long the DSL connection stays active.

The thing about these crashes is that the DSL outages can last for several hours and no amount of rebooting or factory resetting modems will help. Which made me wonder if some kind of kill switch was being flicked on at the cabinet...

Anyway, thanks for the IPv6 reference, I will indeed disable it the next time I turn the iMac on. I'll also see if I can do something about the "MDNS packets" you refer to (need to look them up, because I've never heard of them before). The Netgear Nighthawk modem is very customisable so I'm sure there'll be an option there somewhere.

An outage that does not come back, sounds like some form of interference upsetting the DSL signal. Possibly the MAC or separate power unit, if it has one.

If you can use the smart hub, there is a lot of useful information that can be obtained from it, before and after any outage.

If you can take a copy of this page.

Then take another when you turm the MAC computer on.

See if there is a large drop in the maximum data rate, and a drop in the downstream noise margin.

Thank-you Keith, I will do as you suggest. And post back here soon.

I don't have any of that problem with an iMac on Infinity 1. Occasionally it'll drop the connection, Ethernet with home plugs, but connects again within about 30 seconds. You could try booting the mac in Safe Boot as this eliminates all none mac extensions or boot using a guest user account just to see how it goes.

Just a further update on the situation. My DSL went down yesterday afternoon and has only just come back up again now.

Here is a picture of the technical log before I turned the iMac on: 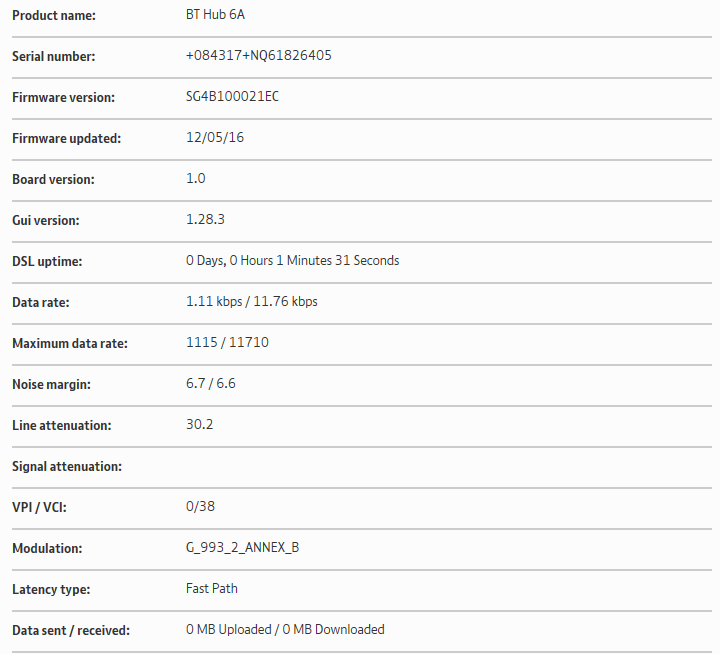 And here is a picture of the technical log AFTER I turned the iMac on and let things get up and running: 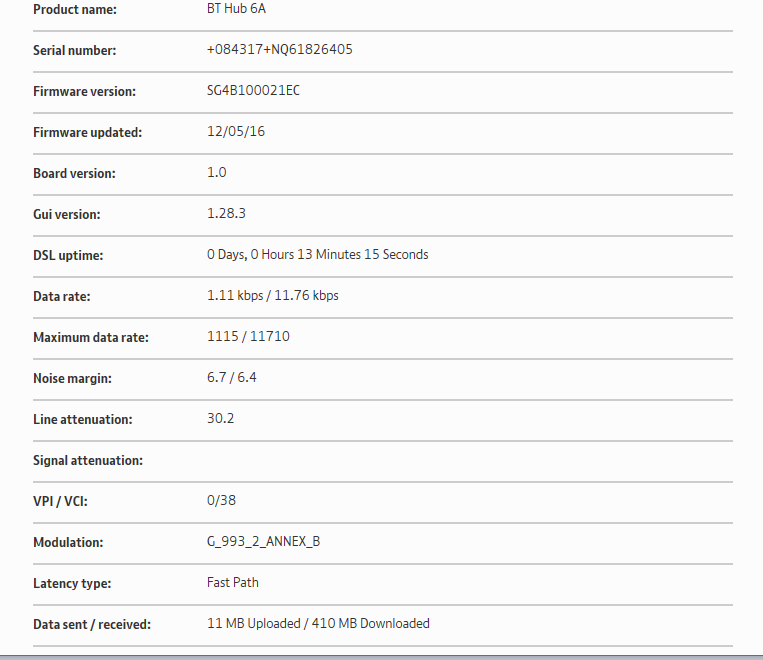 Other than a slight adjustment to the Noise margin, I don't think anythng else changed.

Anyway, the DSL has already dropped out again. It could be the iMac... more likely, the VDSL is unstable and there's nothing I can do about it. Apart from downgrade to ADSL.