We recently moved over to BT vision from Sky. This meant I had to remove the Asus RT-N66U router that had worked trouble free for 2 years as "it is not compatible with BT vision" and replace it with the original Hub 3. Immediately we started having WIFI drop out issues and periodic speed drop off, neither of which went down well with the wife or kids and would appear to be all my fault for trying to save a few quid by going to BT from Sky (Don't get me started that we can only have a maximum of 2 vision boxes to replace the 3 sky boxes we had and we have lost the guest WIFI facility that we had for the kids friends and the home network we had now won't let you remote access any of the storage). A few calls later we were sent a new letter box friendly home hub 4 which I had to go collect from the post office as it would not fit through the letter box!. This was dully plugged in and whilst better has still not fixed the issue and we still experience "cannot connect to the internet" every couple of days. We still get times when speed drops right off for a period of time, at its worst this is down to 0.2 Mbps when we normally speed test at 25Mbps on wireless and 74Mbps on wired. Turning the White Open Reach box fixes it usually but its a pain if you are trying to watch something. These issues tend to be on a night, not sure if that is totally the case but it is the time when we are all in and incidentally is also the time you cannot get any support 8am to 8pm only I'm afraid with BT (unlike Sky). So after last night’s debacle trying to watch Skyfall and then having to switch everything off and back on again part way through, (dads fault again) this morning I rang the support line via 150. I had previously been given a text number which I was told would be answered within 2 hours with a call back but having sent 4 texts that had either not been responded to or have been called through the day when most good folk are at work, I've stopped using it. When you think about it, most people get home around 6pm, you then have a meal, get settled down and browse the web or watch TV. If you have an issue and ring BT, the chances are it falls outside their opening times. Epic fail BT! Why not open 10am to 10pm to give people a chance?

Anyway, that’s the background, now on to the call this morning I rang to complain once again that BT Sport HD was not working, was asked to do a software update again and then was told its a technical issue that will be resolved on Tuesday.

Fair enough, I've only been paying for it for a month! I then asked whether the same person could help with the WIFI and speed. He said he could what was the issue. I ran through my tail of woe again, don't these people take notes, to be told that BT don't guarantee a Wi-Fi signal and that the signal will not pass through walls. So if I get this right, only one room can have WIFI, I don't think so! I explained that the previous router reached all corners of the house as does the home Hub 4 (just) and that that was not the issue because the signal drops off in the same room as the router. He then asked me what speed we get on WIFI which I told him was normally 25 to 30 Mbps only to be told that that was impossible. Okay, I am biting my tongue by this time. He said he could fix the dropout and asked me to log on to the home hub. Strangely enough, I can do that from memory now as I have done it so many times. He asked me to change the channel number to 6, fair enough that’s not one we have tried before, although we have tried a few now. He told me my problems would be fixed and tried to make an exit. I asked him what about the slow speed as the only way I have found to fix it is to turn off the white Open Reach Box count to 10 and turn on again. He told me that would be fixed as well. Tongue now starting to hurt I’m biting so hard. I explained that the BT View box and main PC were hard wired so WIFI performance would not affect them. The response was that Google Chrome server issues are to blame. Okay was my response what about Internet Explorer which uses Bing and Opera because all three run slow. It must be the port on your PC was his reply. No sorry that would not explain why the BT View box has issues at the same time. Ah it must be static then from the mains and what you must do is turn everything off and restart it every couple of days. I’m starting to bite by this time having wasted 30 mins of my weekend on the phone and told him he was talking rubbish and put the phone down on him. I never had a single issue with the ASUS router but the BT gear appears to be useless. Don’t really know where to go from here. Is anyone else having similar issues? 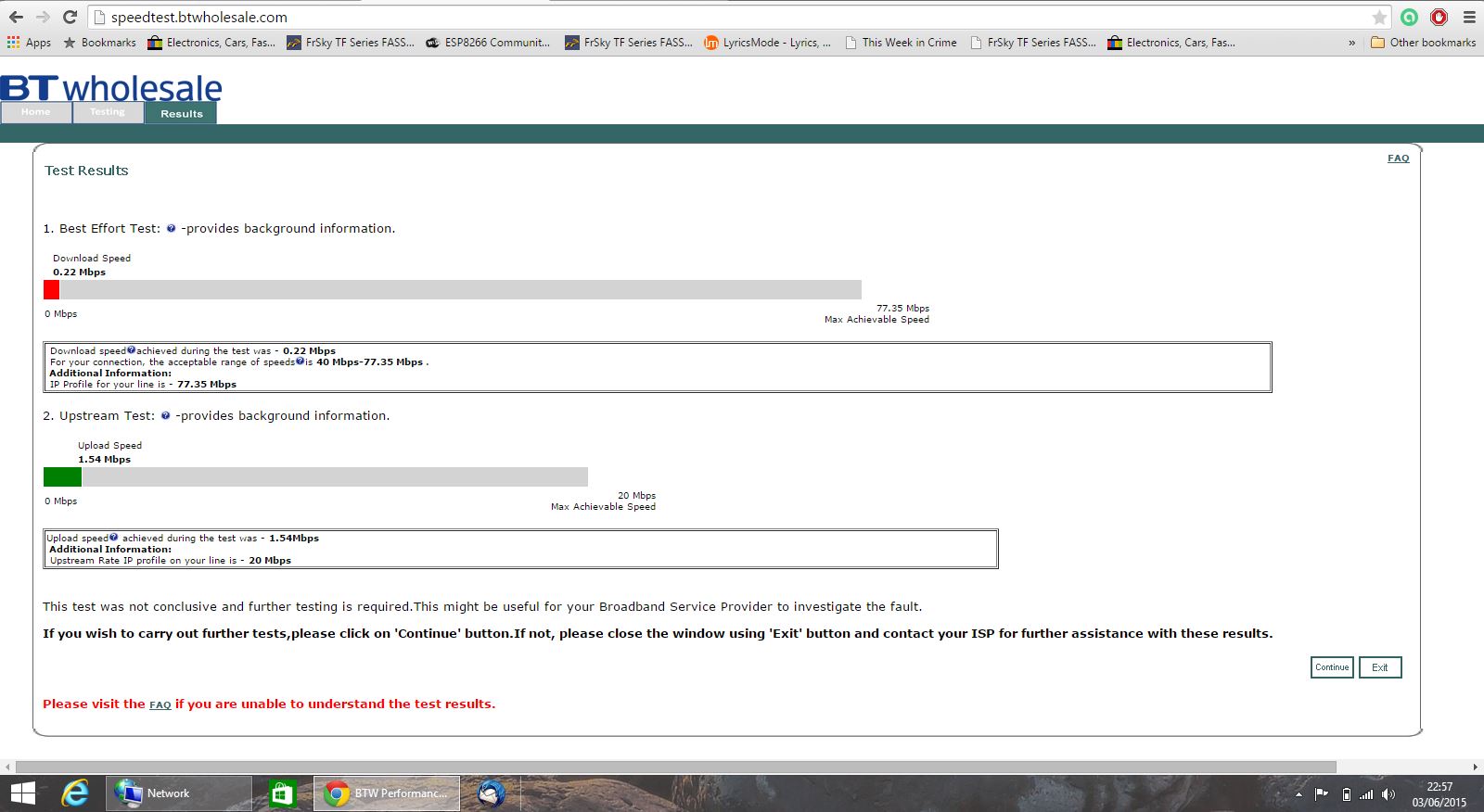 was the btspeedtest done wired or wireless?  if wireless can you run it again but wired please and post results

and use this speed tester then carry out the further diagnostics and post back a screen shot of all the results including your IP profile for up and down.

This test must be done with a wired connection.

Hi, I can run a speed test now and it will be fine, thats the problem, it is intermittent but next time I have issue I will snapshot from wired PC.

Go to solution
Thank you I will do that.
0 Ratings

Like I said, speed is okay at the moment but as sugested, I will run tests again when it slows right down. 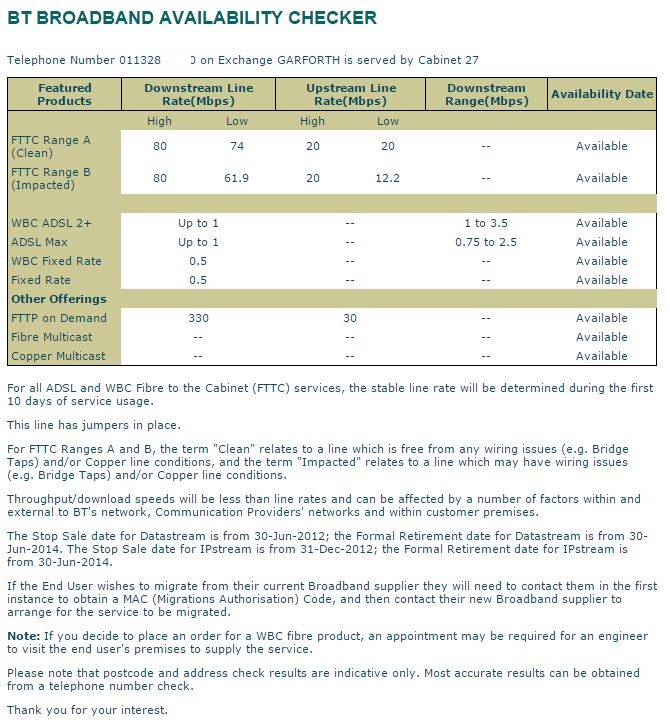 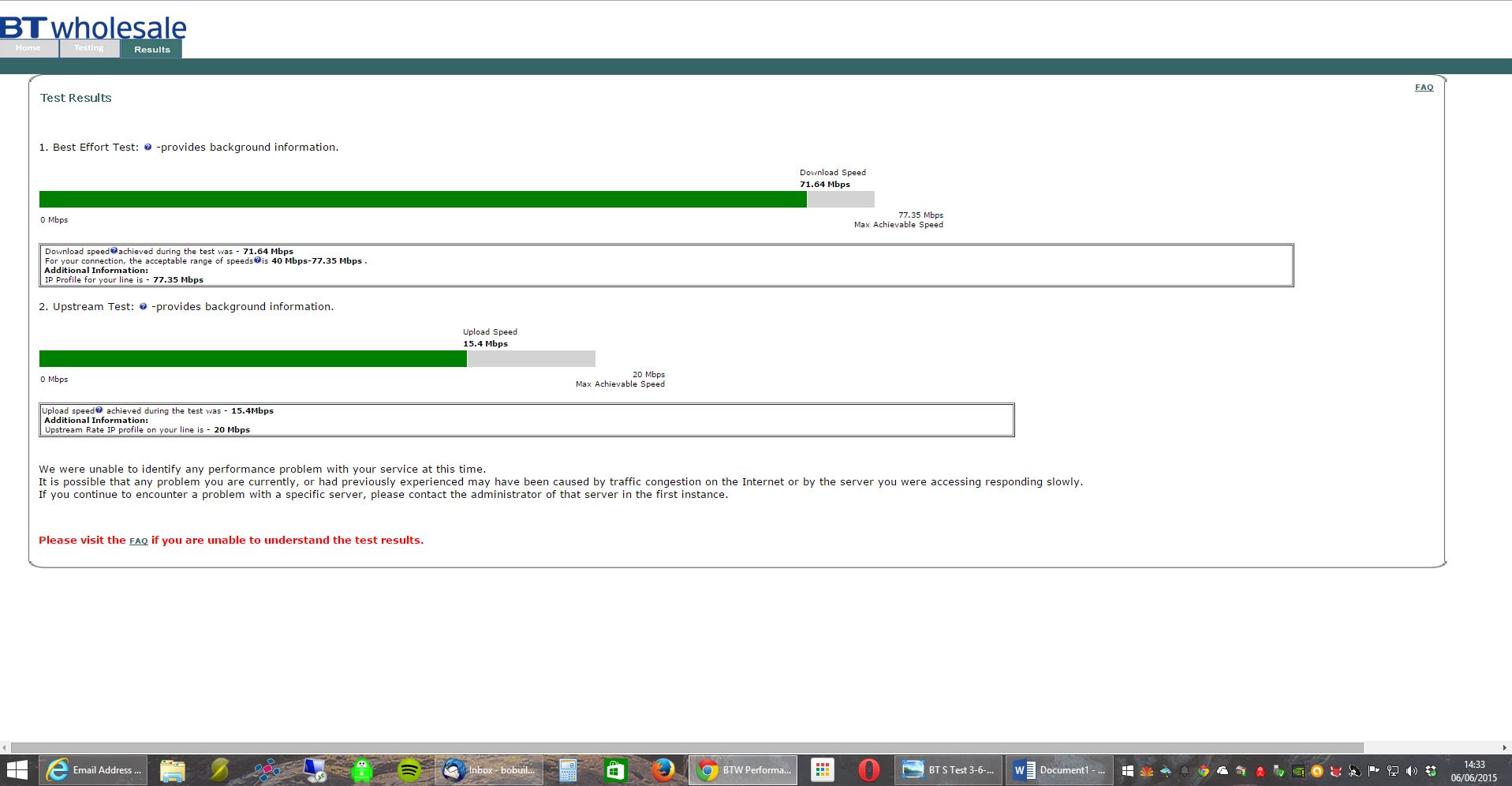