I noticed that all day today the activity light on my draytek modem was constantly blinking.  After performing some resets and the problem didn't go away I lookep deeper into this.

All of the activity lights on my switches were also constant and I look at wireshark to see what the traffic was and it seems to be IGMP traffic.  Now I know that the youview box uses IGMP but if i disconnect this then the traffic doesn't stop.  If I turn off the IGMP proxy on my draytek router then the traffic no longer forwards to the whole lan but the modem continues to receive this traffic.

I am attaching a screenshot of wireshark, can anybody help with this? 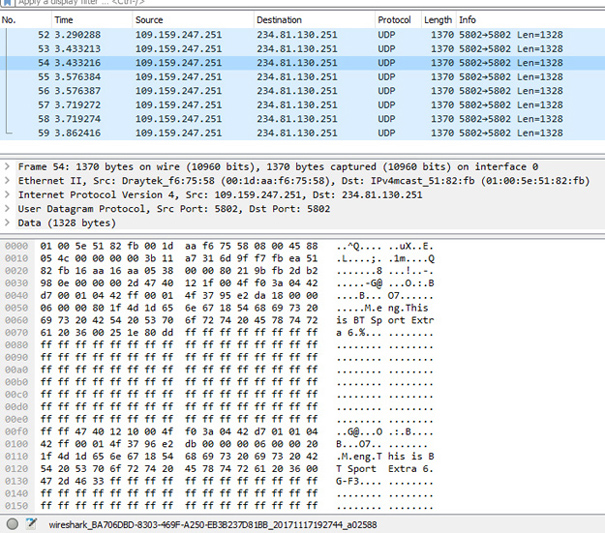 I found the only solution is to disconnect the youview box and then reboot the router and modem and leave the youview disconnected.  I guess a lot of people would not notice this if they were using just a home hub as it has no activity indicator.

Of course I could move the youview connection to it's own managed port to prevent the multicast going to other ports on the unmanaged switch, but that would still leave the modem light annoyingly blinking away.

The youview box never used to behave in this way and I don't know if it is an intentional change by BT or some kind of bug.

IGMP is used to multicast network traffic to multiple locations and as such is used by BT TV. Everyone on BT receives this. I've not got youview or BT TV and I can see the drops for multicast traffic in my router logs.
0 Ratings

Oh I know I have always had them but just not in such large volumes and frequency.

Turning on the IGMP proxy is the only way to stop the traffic on the LAN ports that do not request multicast.

If you have the YouView box directly connected to the Draytek modem/router, then the multicast traffic will only be directed to that port if you have IGMP proxy on.

Without IGMP proxy turned on, the only way to stop multicast on your LAN, would be to use managed switches which implement IGMP snooping.

So glad I noticed this thread, had BTTV for 2 yrs, last 2-3 months noticed the LAN 1 light flashing constantly on the Openreach modem, turned everything off to no avail and was about to blame the Echo Dot which I had recently bought.


So glad I noticed this thread, had BTTV for 2 yrs, last 2-3 months noticed the LAN 1 light flashing constantly on the Openreach modem, turned everything off to no avail and was about to blame the Echo Dot which I had recently bought.

It would only show if you subscribe to any of the BT YouView extra channels, or BT Sport, which are delivered using Multicast.

The very early BT Vision services were delivered by unicast, which would not show a lot of activity unless you were streaming a programme.

Multicast can cause issues if you have an "dumb" Ethernet switch.

See Problems sharing the signal to the YouView box with other devices.

The way multicast works is that a device e.g., the YouView, sends an IGMP 'join' to signal to an upstream router that it wishes to receive a multicast stream on a specific group. In the case of the capture you showed earlier the YouView box has requested to receive the TV stream that is being sent on the multicast group 234.81.130.251. The traffic you captured was the actual multicast UDP stream with the audio and video that would be displayed on your TV.

If you're still receiving the stream after you've selected a different channel or turned the YouView box off, then it could be that the YouView or the Draytek is not sending the IGMP leave. Even if the IGMP leave is not sent, the traffic should stop after a short period (around 3-minutes) of turning the YouView off as the router should not be still sending the IGMP joins to the upstream BT router if there are no clients on your LAN that wish to receive a stream.

If you're watching an IP TV channel, then as Keith points out, the way to stop that traffic being sent on all LAN ports is to use a switch that supports IGMP snooping.

Okay so I moved the youview box so that it is connected directly to the draytek router rather than to the unmanaged switch. This takes care of the traffic being forwarded across all ports on that switch as the router has snooping.

It's still weird that the amount of traffic has increased only recently. I have had BT TV for a long while. Although the amount of bandwidth used by this when not watching a multicast channel is still miniscule.
0 Ratings

The data of each packet seems to run in a cycle advertising what is currently being shown on each channel.
0 Ratings