DLM does work (Well it was) speeds now rubbish

DLM does work (Well it was)

The speeds I got before the fault were After the fault had been repaired my speeds dropped to I was a bit worried as there are quite a lot of comments regarding the DLM and wether it works or not. so I guess DLM does work.

well today six weeks later I get this thats even worse than the day after the fault was fixed (I use a wired connection) I have a HH3.

Greatful of any helpful comments

Re: DLM does work (Well it was) speeds now rubbish

That's not good at all, did you manage to get this reported?

Re: DLM does work (Well it was) speeds now rubbish

Yep had online help on Monday did a few tests says I need to book an engineer, Which I will do as soon as Easter has finished.

My speeds have dropped massively I phoned India (30/03/2015), I did all they asked and they said I would need an engineer.

Very Strange as BT fault tracking shows the issue as being at step 1 BT retail servers.

I am not aware of any BT retail servers bieng at my home address.

It would be interesting to see what other other forum users think.

Further diagnostic tests began at the time and date shown to find the problem with your broadband. Once we know more we will contact you using your contact details above and once we have fixed your problem you will see an update on this page. Thanks for your patience 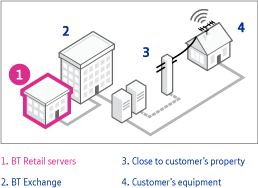