It is great news that one of us actually has fibre now at our exchange.

Fantastic speed results you have their infupg1.

Using BT's Dual-Band wireless dongle (at 2.4GHz) on my laptop increased the speed test to ~60 Mbps compared to 17 Mbps using the built-in wireless.

I tested by downloading a 785MB Linux ISO and and in less than 3 minutes it was done. The speed was ~5 MB/s.

I also have a 5GHz router so I should be able to make it faster.

Do you know what distance you are from your cabinet? and what was your original

speed estimate for FTTC on the BT Availability Checkers and when signing up?

The estimate was 54/15. I don't know the distance. The engineer showed me some info on a little device he had and it said 80/20 but I wasn't sure if that meant it was actually connected at that.

I remember the ADSL estimate was 5.5 but it often achieved 13 until a HR fault. After BT fixed the HR fault it mostly connected at 11. A few months ago the HR fault returned but I didn't try to get it fixed except by changing the SNR to 15 dB which resulted in it connecting at around 8.

I hooked up my 5GHz router. Speed test using my Dell XPS 17 with it's built-in 5GHz wireless (previous laptop testing was an older XPS running Vista): 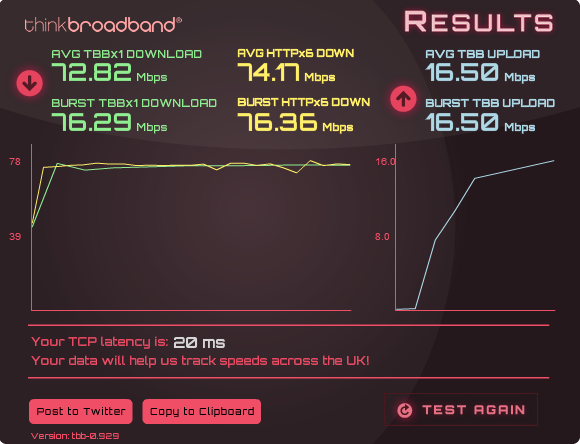 Good luck to everyone waiting for fibre. Hopefully it'll come soon for many more cabs in Bonnyrigg.

I wasn't sure I should post about this but whatever it could help someone.

Around the end of August (before fibre was available) I ordered a second telephone line and BT broadband which was to be installed upstairs for the kids to use (rather than use a WDS bridge).

The new line was to be installed mid September but the Openreach engineer didn't turn up. The new line had been denied by Openreach and when BT tried again it was denied again. A specialist team were looking into the problem but the order was eventually cancelled and I have been told I need to send back the HomeHub 4.

I tried to find out why it was cancelled but all I was told was that a new order would be required for it to be successful.

So the day after the cancellation I ordered another new line with BT Infinity 2 but this time I did it over the phone and I was assured the problem wouldn't happen again. Last week it was flagged as delayed similar to last time but I have been told not to try to find out more until 11th October.

The new line process has gone on for more than a month and it appears to be impossible to find out what has gone wrong. So if anyone is thinking about ordering a new line with fibre you might want to upgrade instead otherwise you could end up without fibre for a few more months!

Did you ask him about a likely go live date?


Did you ask him about a likely go live date?

Just had the engineer round.  Download sitting at 35meg and upload at about 9meg.  Thats an increase from 6meg download.

Two years ago when I started this thread I was getting 120k download.  What a turnaround.