That is exactly what I had when I took out the option to upgrade the Youview + box to Ultra HD box and Entertainment Plus .

£49 for the box . £15 pm for Entertainment plus and self Install. no problem with that

Now for extra Box subscription ONLY they want £44 engineer install fee to do the extra Box that I already have up and running for the freeview channels.

I might be wrong davgille7 but reading your post it looks like you ordered the ultra HD box, sports and extra box, or subscription only AT the SAME TIME.

My extra box subscription  was being ordered on its own.

and if selecting to connect myself

Thanks Zulu17, but thats why it's so stupid. For me and others it is completely different an d even speaking to advisors I can get nowhere. All they say is You have to have the engineer install. Crazy.

I go to MYBT and login and as I have already got Sport I have to use UPGRADE TV, then Extra Box. Enter Phone and postecode, say no to Netflix,All Sky and movies, stay on my current subscription (only option) and then select TV Everywhere with Extra Box Subscription and thts where the charges start.. You can see below:

Then appears the Install charge with no option to remove 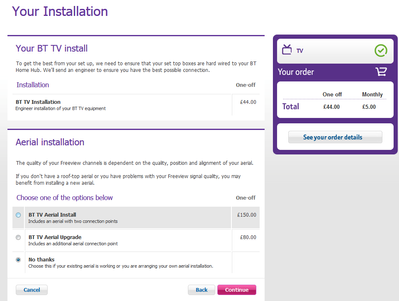 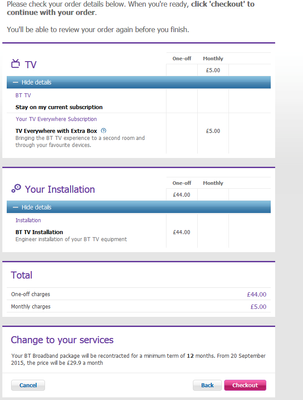 still no option to remove and next page I have to select a date for the engineer visit. 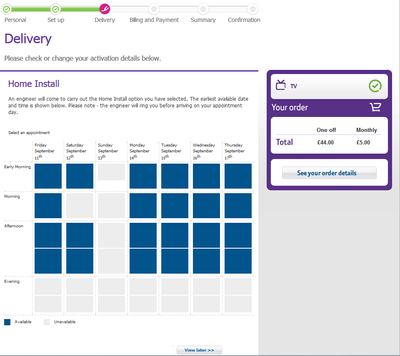 So something completely different from yours.

The only other thing I would try is calling 0800 434 6063 which is UK based specialist team for BT sports. Tell them you are set up and just need multiroom activated.
0 Ratings

After two phone calls over the last few days I tried an online Chat today. The young girl listened  and then agreed to ring me and put me through to someone she believed might be able to help. I spoke to Nathan and explained what I was trying to get and what I already had . Trying to get an Extra Box subscription only and I already had a Yopuview + box and a Youview Ultra HD box. He looked at my account and said that, "It did look like what I had needed an Engineer install". I asked why and he said it was to ensure that customers with Ultra HD got the best experience.. I said I could totally understand that if I had a Ultra HD TV but I didn't.... Then he said ahh, then it's because you have Entertainment Ultra HD TV pack (£15pm) when all you need is Entertainment MAX which was the same @ £15pm. He has changed the package to what it should be and now waiting to see if once the order has been completed if it will sort itself out. He appears to think so.

So it looks like because I took out the offer of the Ultra HD box I went onto the Entertainment Ultra HD package and this was possibly the cause of the problem..

It just needed someone like Nathan to listen and to start thinking WHY, not just keep saying no you must have this or that.

Well I got the extra sub for £5 per month with no extra engineer charges and the Talk Talk box is working ok, just about

Just one observation for BT, the extra sub order process is  confusing and gives the impression of being charged unwanted extras.  I had the £3 kids bundle on my current main box.  I ordered the new £5 sub online and it prompted me to stay on my current sub, I clicked Yes.  So it then shows the Kids bolt on with what appears to be an extra £3 per month charge.  I assumed it was £3 per box as I had it already and that this was going to be thus £6 for 2 x kids bolt on so I decided I did not want it on my extra box, main only, so unticked the Kids bolt on.  However, this actually cancelled it totally from both my boxes so I had to add it back in at a single £3 for both boxes.

But the Talk Talk box itself is rubbish in performance terms when compared to the BT DTR-T2100 so I regret not ordering it at order time for £99.

Do we only get the one chance to buy the extra Youview+ box at £99?  The only place I can find it now is on the BT shop and they are asking £179 which is a bit step lol

Back on Talk Talk, if you are thinking of taking Talk Talk Youview then I would leave it for the meantime.  Their youview box is rubbish, the freeview tuners on it are rubbish and they also do not have the ability to stretch certain 4:3 pictures to proper 16:9  Talk Talk tech support admitted to me that an extra signal is sent with pics as regards aspect ratio and that most Freeview TV's/boxes can read the signal and size accordingly but that the Talk Talk box cannot.

Back on Talk Talk, if you are thinking of taking Talk Talk Youview then I would leave it for the meantime.  Their youview box is rubbish, the freeview tuners on it are rubbish and they also do not have the ability to stretch certain 4:3 pictures to proper 16:9  Talk Talk tech support admitted to me that an extra signal is sent with pics as regards aspect ratio and that most Freeview TV's/boxes can read the signal and size accordingly but that the Talk Talk box cannot.

The issue of YouView boxes being unable to stretch a 4:3 to 16:9 picture is AFAIK on all YouView boxes, no matter the brand. YouView see this as the box showing pictures in the correct aspect ratio but it is something that quite a few customers would like to have....

BT's position on using existing Youview boxes for their additional box subscription is somewhat confused. I recently went through this process myself as I already had a Talktalk youview box (DN-360T zapper) lurking in a cupboard.

I found that I was able to go through the process online fine, and it would allow me to add the 'subscription only' option with no additional boxes required and no engineer install fee - however it wanted to recontract all of my BT services for another 12 months which I was loath to do.

I tried calling BT where I was told that there was no such option to bring an existing box with me and I had to buy another box from BT - no other boxes would work. I told him that was not what their own website said. He went away to speak to his manager only to come back and regurgitate the same nonsense.

In the end I got put through to the customer options team who were able to do what I wanted, no questions asked - extra talktalk box up and running, and all BT multicast channels streaming in less than 20 minutes.

However, like derryviewer I've found the contrast between the performance of the BT DB-T2200 box and the Talktalk box to be quite astounding. Does make me wish I'd forked out for the new box when prompted.

You live and learn...