This is going to be long and probably sound like a rant!

But after such poor service I need to get it off my chest!!

I got a letter a couple of weeks ago saying infinity was now available in our area - yippee, I've been waiting ages!

Tried to order it online but it wouldn't go through as it said our phone number and postcode didn't match (they are correct when they send us a bill!)

Next day rang up sales  - the lady tried to put the order through but couldn't as she got the same problem I did.

Got transferred through to tech support

The guy I spoke to managed to put the order through no problem, he confirmed the speed and arranged an appointment for an engineer to call to fit a new master socket and 'optimise' our line so we would get the best speed.

I got an email confirmation of the appointment but it now said estimated speed 27mb and the address the engineer was to visit was so far wrong that it didn't even have our village or postcode on!

I rang to query the speed and ask them to change the address.

The woman said that an engineer wouldn't be coming and I would get the hub 5 and just had to plug it in; she said she had 'put a note on the order' about the address being wrong and I should monitor the speed once it up and working.

Home hub 5 arrived on Tuesday as promised; and the packaging said an engineer would be coming to fit it all.

I rang support back as I was now completely confused!

The guy I spoke to said the engineer was coming and someone had to be there for him between 1pm and 6pm. I got a txt to confirm this.

So I took the afternoon off work today and waited for the engineer.

And waited, and waited; at ten to 6 I sent them a txt asking where the engineer was.

At 6 I called them to find out what was going on.

I was told that an engineer wasn't coming and I should just plug the HH5 in and wait for it to activate.

I started to (politely) complain and was immediately put on hold! Spoke to the manager and explained the situation - he was very polite and understanding and did precisely nothing.

No engineer was coming and I had to plug it in myself; I said that was fine, but if I didn't get full speed I would expect an engineer to come and sort it out and I asked them so make a note of that on the record.

I'd just started eating and the phone rang - it was BT  tech support responding to the txt I'd sent!!

Spoke to a different woman - went through the above - she looked on the record and said an engineer should have come and I needed to call the order management department - she put me through - the phone rang about 10 times and went dead.

Connected the HH5 at about 7.10pm and waited for it to start up and go blue - time for a speed check.

6.88mb! just slightly slower that we normally get 😞 [our exchange is max 8mb apparently]

At this point I went to my Karate class.

Then I'll presumably have to wait a few days to see what the speed settles down to and at some point contact BT to discuss what they are going to do to compensate me for having to take half a day off work to wait for an engineer that they apparently had no intention of ever sending!

I've dealt with the odd dodgy company in the past, but to find this level of confusion and incompetence from what is supposed to be one of the country's leading communication companies astounds me!

You've perhaps guessed by now that I'm a bit miffed at all this.

(why is there no such thing as a sarcasm font?)

If you are getting the same as before its unlikely you have had the upgrade to infinity. Can you run the BT speed tester to see what it says??
0 Ratings

I suspect you have not been put onto Infinity.

As you have a Homehub 5 can you also post the stats from 1-12 by logging onto the Homehub management pages then troubleshooting > helpdesk. http://bthomehub.home/

Been away for the weekend and just got back.

I've run the speed tests and I'm still getting the same speeds as I was before infinity - ie normal broadband speeds, so I presume we have not been put on to infinity.

Looks like it will be another call to the 'help'desk

Can you run the other test that was asked for.

Your speeds clearly indicate you are not on "Infinity" at all. The upload speed reading only 0.36mbps, with those estimates, shows you are still on ADSL Max, as even if the download speed was a bit low, you'd get at least 4mbps upload speeds.

Post back the results from the speedtester as linked by @gg30340 and mods may be able to assist in the issue.
0 Ratings

It would be better to have the stats from the HH5 as he requested.

@SuperSajuuk wrote:
Your speeds clearly indicate you are not on "Infinity" at all. The upload speed reading only 0.36mbps, with those estimates, shows you are still on ADSL Max, as even if the download speed was a bit low, you'd get at least 4mbps upload speeds.

Post back the results from the speedtester as linked by @gg30340 and mods may be able to assist in the issue.

There could be a fault/problem with the installation that could be causing the low speeds. Until the test that I requested or the Hub stats are posted you are only speculating, albeit probably correctly, that it is the reason.

Moderators only become involved when all other options have been exhausted.

Stats from HH5 below.

Spoke to tech support again last night and I have not been connected to infinity - which I already knew due to the speeds being identical to my previous normal broadband speeds.

Someone from the Data Intergration Team is aparently going to ring me today. 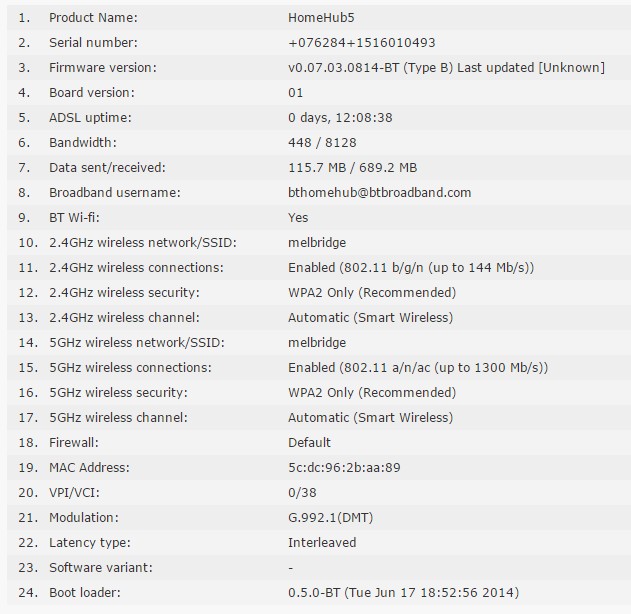