Not sure if anyone can help here but I am trying to get a REIN fault investigated via BT Broadband and BT OpenReach and getting absolutely nowhere fast....

The fault has been around for at least 6 weeks and is impacting a few houses in our street.  It could be a lot more but I have only checked with a few.  It is persistent 24/7 and the interference comes and goes in cycles anywhere between 15 and 60 mins.  It's not xmas lights as it started way before anyone had switched any on and I doubt that they woud leave them on 24/7.  It could be a central heating thermostat though.  I have already isolated my own house by running my router off of a battery and powering off the mains.

I raised the issue with BT Broadband and after a few calls they arranged for a visit from an OpenReach engineer on Friday 12th December.  Despite the fact that I had spent nearly 2hrs on the phone to BT Broadband and explained the issue the first thing the engineer said was "I am not trained in REIN issues"

.  He left stating that he would "do his best" to escalate the fault to a specialist REIN engineer but didn't sound confident.  He also promised he would follow it up himself later that day to make sure it got to the right team.

I chased BT Broadband yesterday and had a call back today to say that everything was now fixed and could I check my broadband connection!  BT OpenReach had just closed the fault as "resolved" and had not escalated it at all.  I have attached a graph of my noise margin at 4pm today and as you can see... it is certainly not resolved.  All that BT Broadband could offer me was another engineer appointment for next Monday.  They have told me that it is likely that this engineer also will not be able to resolve the issue and will try to escalate it to a REIN specialist (again).

I have been here before with BT OpenReach having had REIN faults in the past.  They did the same thing then, failed to escalate it and just closed the fault instead.  Last time I contacted OpenReach directly and they did intervene and managed to get the fault to the right engineer.  I contacted them again today hoping that they would help again but was simply told to refer to my ISP.  It seems that they are more than happy to keep sending engineers to my house at their own expense... perhaps I should send them a bill for my time and loss of earnings?

To say I am a bit hacked off is an understatement.  I now have to take time off work and wait here on Monday for an engineer to come who I know is unlikely to progress the fault.  He may even just close it as resolved again and we will be back to square one.

Has anyone got any experience of getting REIN faults to the right team and can one of the mods help in any way?  Whilst I would like the issue fixed to get my broadband service back to normal I am also just trying to save BT from wasting their time. 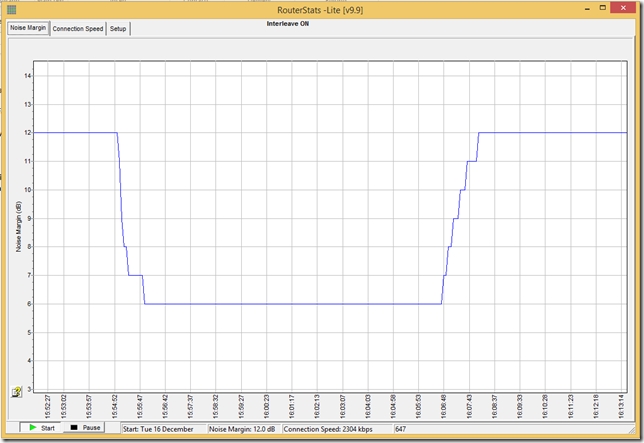 are you a bt broadband customer "I contacted them again today hoping that they would help again but was simply told to refer to my ISP. "
0 Ratings

Yes I am a BT Broadband customer. They organised the 1st engineer visit.
0 Ratings

dis you not have rein problems before from a nearby pumping station?  could that be the source again?  have you tried with a protable radio tuned to 612MW and listen for the interference?

Hi yes we did have problems with a pumping station before :). After that we had another fault caused by a treadmill.

I have tried an AM radio and I am pretty sure it is not the pumping station this time around. I will check it again though.

At the moment I am just trying to work out how to prevent another wasted engineer visit on Monday as I am pretty sure they will only try to escalate it again.

The REIN specialists have found the source before in minutes, if only I could get one to visit.

This may have been posted the last time you were on the forum.

Yes I have seen a similar list before. The problem is that I already know that the source is not within my house, I have powered off the mains at the distribution board and the issue is still there. Asking each of my neighbours to do the same is a little more challenging. This is where the REIN specialists help, they can identify the source quickly and if it is in a specific house then approach them and inform them of the issue. They cannot do any more to resolve it but identifying it is all I need.

My problem is that I will almost certainly now wait another week and waste a day off work just for another OpenReach engineer to arrive and be unable to help. I might be wrong but based on past experience this is the most likely scenario. Why on earth BT OpenReach are still incapable of escalating a fault to the right team two years after they last failed to do this I have no idea.

Well the 2nd BT engineer came today. Yep you guessed it... no idea it was a possible REIN fault and not equipped to deal with it. Couldn't find anything with a portable radio and went off to the exchange promising to call me back. That was the last I heard from him :-(.

Guess I will get another call from BT Broadband support in a few days informing me that it is all fixed when the OpenReach engineer closed the fault. Oh dear BT, failed again. next stop BT complaints dept. Why do they insist on making things so difficult. I know BT Broadband and OpenReach are completely separate organisations but surely they can communicate better than this, remember "it's good to talk".

Hi.  As one of Mark's neighbours I would like to revive this thread.  The problem that Mark described was indeed never fixed. The problem is still just the same today.  Since Mark's report our telephone exchange has been upgraded to ADSL2+, but the pattern on RouterStats still shows fluctuation day and night (winter and summer) of around 3 to 5 db.

Do any OpenReach REIN engineers read this board?  If any do, can they help us in any way?

Most people who live on the same estate as myself and Mark consider their broadband to be rather poor, although many of them are not aware of why it is like that.  Some have even ditched ADSL and now use a mobile data connection.

Please, if anyone can offer any advice or assist in any way, then please do!

I don't particularly want to go through the same process as Mark already has, but if all else fails then maybe it will be worth a try.