Looking at the list of games to be covered by BT TV channels (as opposed to the app) it seems that only 2 of the  sport extra channels are being used  Thursday (17th) for the games. So effectively 4 early and 4 late kick off games are being shown on Thursday.

Is there a reason why other games are not being transmitted on the other available Sport Extra channels ?

While a limited number of games can be shown at one time across BT Sport's TV channels and the new Connected Red Button service, every single game can be viewed via the BT Sport app or online at BTSport.com.

It does seem suprising that the other extra channels are not being utilised.

So there are 12 games with an early kick off and 12 with a late kick off and BT have 11 BT TV channels including the x1 to x7 and they buy up all the rights so no one else like channel 5, itv4 etc can show any games, THEN only show 4 early and 4 late kick offs. Ridiculous!
0 Ratings 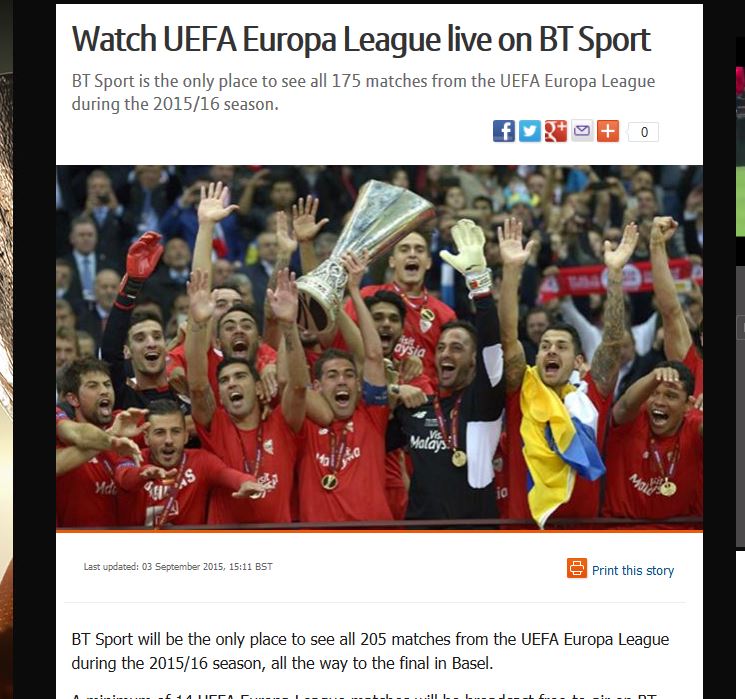 I've checked and cannot see any other games on any other channels. SO WHY? buy the rights to all the games and not show all of them. Also the Champions League is on BT sport Europe, BT sport 2 and X1 to x6 with Cubs v pirates baseball on BT sport 1. This is the tactics sly tv uses. Put the champions league on the main channels eg BT sport 1. Plus what is x7 for? I've yet to see anything yet!
0 Ratings

Juding from what I can see on the app, it now apperers that BT Sport will indeed be showing every Europa Leauge game, good news for everyone who was looking forward to watching Galaba vs PAOK

Whilst the other  games are available on the Android and Ios app - neither app is allowing the games to be cast or airplayed to TV when you attempt to do so you get a BT Sport Extra logo screen. Disappointing - app fault or intentianal restriction from BT - who knows

I would welcome an explanation as to why BT is apparently only broadcasting Europa League  on two of the seven  available BT Sport Extra channels particularly as BT appear to be stopping Casting/airplay of the Sport App Digital Exclusive content.