I recently moved house, and was finally able to order Infinity 3 at my new property.  It was installed on 17th March.

The engineer ran his first test and we saw a speed of 196Mbps down, near 20Mbps up, and a ping of 7ms.

Since then I consistently get speeds like this.... the next test I ran (using speedtest.net) saw 197Mbps and a ping of 5ms.

Right from the first evening, however, I noticed severe dips in speed during the evening.  It's perfect during the day, I literally get download speeds of 25 megabytes per second, even from single sources such as Steam and other download services.

During the first few evenings I noticed drops to around 70Mbps.  Hardly catastrophic, but not what I'm paying the extra for.

Last night I was getting really annoyed.  I wanted to download something large from Steam, and I couldn't get any better than 2 megabytes per sec.... speeds achievable with a good ADSL2 line!  After a while I gave up and shut down, and then tried again this morning and got the file in no time, at 25 megabytes per second.

So after closing Steam last night, and also attempting downloads from other sources, and starting multiple downloads at once and seeing no increase in speed, I went to speedtest.net and sure enough was seeing download speeds of 20Mbps and less, and my upsteam was no better than 200k per second.

I tried the BT Wholesale tester, and the diagnostic test, and this backed up the results I was seeing.  I even went for the third test where I entered the speedtest_domain username into my Hub 5, which incidentally was the first time my line had been reset since the initial install.  I'd also hoped that a disconnect and reconnect might fix my speed issues, but it didn't.  At the bottom of the page from the third test it recommended I contact my ISP because of the poor speeds.

I did some more tests at 10:30pm and just before 11pm, and did some screen caps with the intention of writing this post this morning.  It was slightly quicker by then, but still nothing like the speeds I get during the day.

So I just wanted to be clear that during the day I get the full speeds that I pay for, so I don't believe it's an issue with my internal setup here.  My first guess was congestion, but it's pretty severe to have 10x my normal speed wiped out.

So at 10:30pm yesterday evening I performed another diagnostic test on the BT Wholesale tester 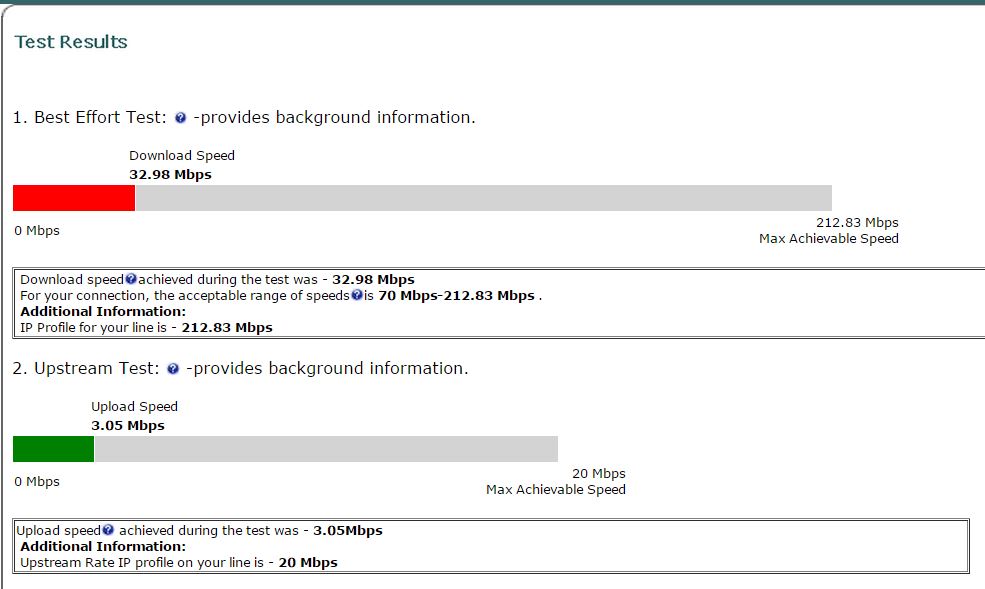 and just before 11pm I tried again, and got slightly higher speeds again, and did the third speedtester_domain diagnostic test.

Then this morning I tried again shortly after 8am.

As you can see, I'm still having an issue with my upstream from this tester, however it's not accurate at the moment as I can upload at a full 2.5 megabytes per second, and I also show full speed from the speedtester.net site.  Yesterday evening, however, I really couldn't get higher than a few hundred K/s

Finally, I also performed a couple of speedtest.net tests on different servers to check speeds this morning.  Unfortunately I didn't save my speeds from yesterday evening, but I promise they were around 20Mbps down, and 2Mbps up.

Actually as the morning has gone on this morning I've noticed a drop off in speed.  Nothing to severe so far, but download speeds have dropped from 25MB/s to 15MB/s.

One of the reasons I wanted Infinity installed, and went with the 200Mbps package is so that I could run multiple online services at once.... stream HD video from Amazon Instant / Netflix, while maybe downloading something on Steam / Consoles, while using video calls... etc etc etc.  When the speed drops to 20Mbps and less.... well, obviously it hinders this.

I'm hoping a mod can help me with this.  I've had great help from SeanD on here in the past when I had issues with my ADSL2+ connection in my previous property, so hopefully something can be done about this.

Sorry, I forgot to mention that I'm using cabled gigabit connections to my PCs, and here are the Home Hub helpdesk stats, with my SSID/MAC/Serial removed:

EDIT: Now just after 11am on a Saturday morning, and speeds are noticibly dropping.  I now see a max of 15MB/s

and speedtest backs this up I'll try to keep an eye on things and see if it is just the evenings, or peak times in general in which I see these speed drops.

Friday was the worst though, dropping to sub 20Mbps at times.

and Steam is working well this morning too, just downloaded a Demo to test right now.... 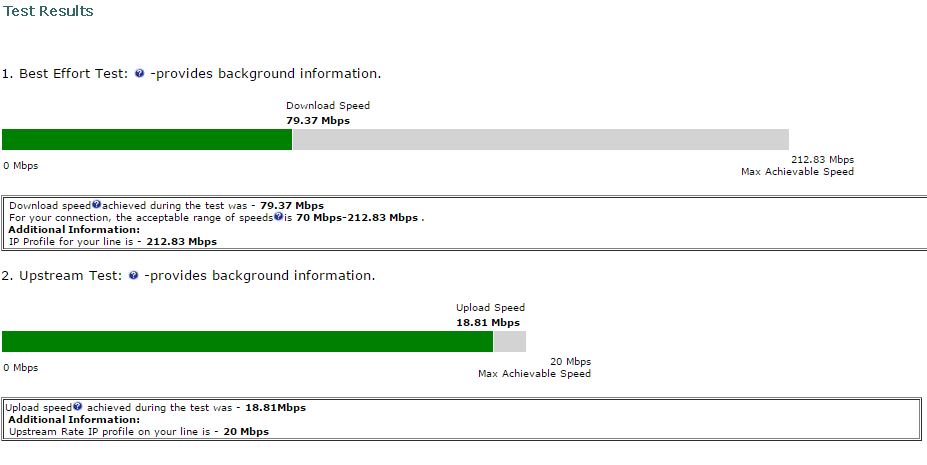 was seeing around 70Mbps from other sites.

I'll have another try after the MotoGP has finished on BT Sport.

I would like to take a look at your connection, can you send me in your details using the "Contact The Mods" link found in my profile.

Thanks very much for your response.  I shall get back to you shortly.

Meanwhile, as usual my connection runs GREAT during the day.

I just performed this test.  Quite amazing, really (which again, I believe rules out an issue with my equipment locally)

Message sent via Contact The Mods link.
Thank you for your help.
0 Ratings

I checked speedtest and it managed to get high 60's Mbps.

I then moved onto the BT checker.

My first run got 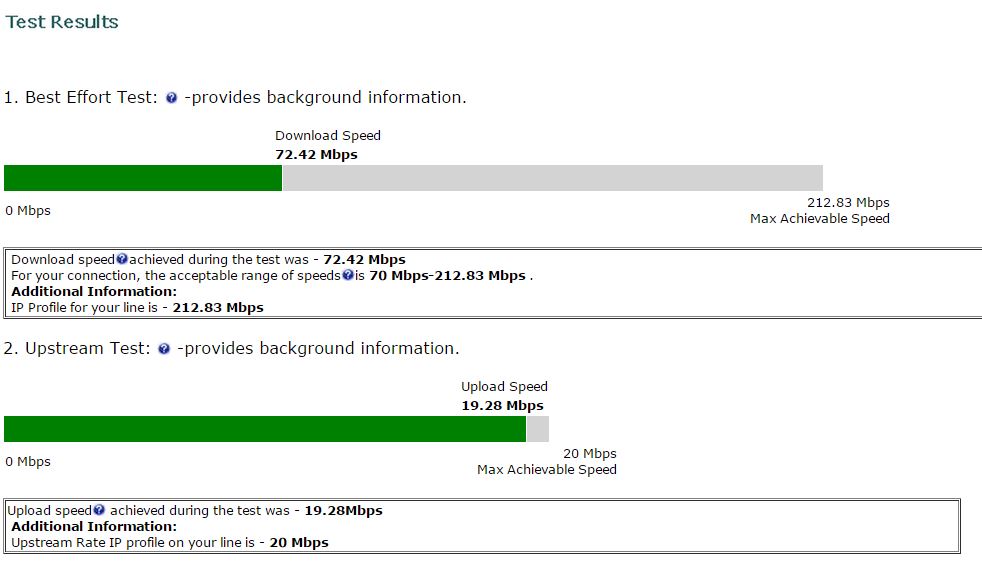 Nothing like the speed it should be, and right on the border of the BT Diagnostic Speedtest telling me to report an issue (which happens at 70Mbps)

Just out of interest I thought I'd try one more test after posting my last message, and sure enough, at 21:16 it's even slower.

It's not only the speedtest that's slow, download speeds from all sites are also much slower than they should be.