FTTP finally installed and working. I though I'd share the result. Where are you living, Seoul ?
0 Ratings 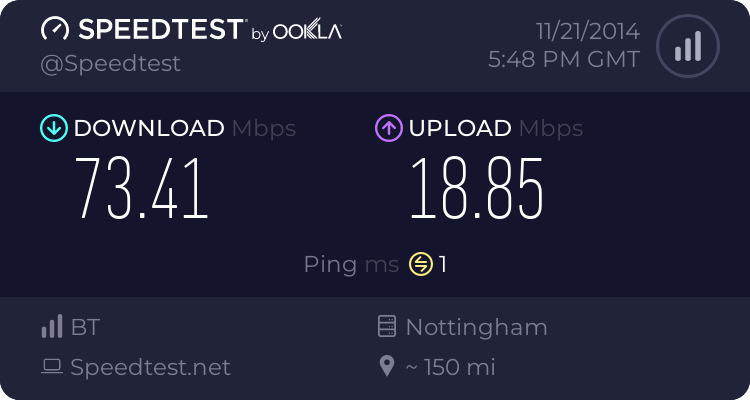 Really. I wouldn't trust the latency result on Speedtest.net. The only way you'll ever get 1ms is hitting something on a local LAN, and even then, only something within two hops. The processing time of packets after that increases response time over 1ms no matter how you're connected.

Ping the speedtest server with the Windows Command Prompt and you'll get a different result.

This is even more true of FTTP as light travels slower through fibre than electrons through copper!

This is even more true of FTTP as light travels slower through fibre than electrons through copper!

I was not sure of that statement but not according to http://physics.stackexchange.com/questions/1961/is-a-signal-traveling-through-fiber-faster-than-a-si... it doesn't

I disagree with the link provided. A quick Google wil reveal that light generally travels through fibre at around 2/3c, or 66% the speed of light.

Velocity propagration through copper depends on many facters, the insulation, guage of the wire and purity of the copper, etc. The Nominal Volocity of Propagation through Cat5e is usually between 69-75%. Take a look at the specifications for this Cat5e for example:

You'll see the specification states that the NVP is 70%.

That's just transmission through the medium. There are other factors on top which make fibre slower, such as the fact that the light signal has to be converted from electicity to light, and then back again at the other side, which adds extra latency. Additionally, light doesn't travel in a linear fashion through fibre optics, it refracts throughout the cable increasing the distance being travelled. (Although one could argues this is true of UTP, as the twists in the wire actuallt makes a 10m cable longer than 10m!)

It's an accepted fact in the industry that copper is faster than fibre. Much research in places like the stock market industry has taken place on the matter where those exta milliseconds really matter!

This is all a digression anyway, I think we can both agree that either way, you're not reaching a server anywhere on the internet in 1ms!

hes right tho its a bug. it use to tell me london was 1ms but i play cs go on a uk box and i get low 10s