The FTTC is being upgraded tomorrow, will we see an upgrade from 100 to 300mbps or is that planned for next year? 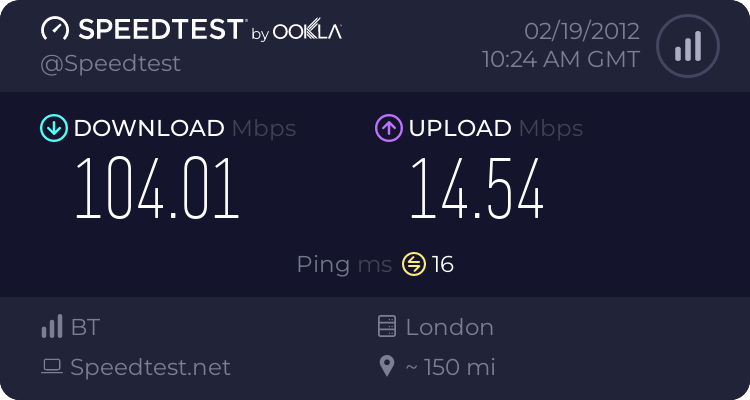 No one knows just yet.
If you want to say thanks for a helpful answer,please click on the Ratings star on the left-hand side If the the reply answers your question then please mark as ’Mark as Accepted Solution’
0 Ratings

I dont think we even know if the 40mbit FTTP version is being increased to 80mbit alongside FTTC 40>80 upgrade.

IIRC there is some information on the openreach site, with wholesale pricing pdfs which left me thinking that the 300mbit upgrade would be a significant price increase too.  That said, i think people expected the FTTC upgrade to cost too. As of tomorrow the pricing looks a little odd, with 80mbit being a fair chunk cheaper than 100mbit, especially if the upgrade does include the 40mb FTTP.

I cant think of many scenarios where having 300mbit will be of any benefit at all or justify a price increase though, the 80mb & 100mb connections seem way ahead of the rest of the internet with very few sites/services making use of anything more than about 20mbit, not to mention the need for gigabit LAN.  Very future proof though 😉

If there is a price increase I certainly wouldn't be going for it. Would have liked 20mbps upload over the 15 though.

Infinity Option 3 is now showing as 100/20  rather than 100/15 on the select package page, i dunno if we'll have to recontract for the extra 5mbit upload - I dont think id bother personally. 🙂

I'm a bit miffed that FTTP users have been largely overlooked on this upgrade. I would be happy to recontract to get a faster upload speed, but I would have hoped that this would have been the 100/30 openreach GEA service. I'm not even aware that openreach have a 20mb fttp upload offering, so I'm puzzled how BT Retail are offering it?

If i go to the BT Infinity order pages today, click 100mbit infinity, enter my phone number to check availability it gives me the following options, presumably all of which are FTTP as i dont think the exchange supports both.

Im happy with my connection and lucky to be able to get it, but i cant help feeling shortchanged by BTs pricing weirdness 😉

It doesn't get much publicity simply due to it's very very limited availability.

It's a catch 22 for BT retail...if they don't speak about it, there's hell on. If they publicise it too much, people will complain that it's not fair given the availability of it!
If you want to say thanks for a helpful answer,please click on the Ratings star on the left-hand side If the the reply answers your question then please mark as ’Mark as Accepted Solution’
0 Ratings

I think that the people who chose Infinity option 3 100mB have been let down by BT.

The reason that I chose option 3 was the difference of speed between the option 2 (40mb) and option 3 (100mb).

But now I feel cheated because they doubled the speed of option 2 to 80mb and now there isn't much difference in speed between the option 2 and the option 3. Basically why should I pay an extra £10.00 a month for a similar speed.

I phoned up BT today to ask them if I can downgrade to option 2 and I also tried to explain to them the reason for my request but the person on the phone didn't want to know and he said that there is nothing that I can do because I am tied into an 18 month contract.

Can someone from BT reply to this as there will be many angry people who chose option 3 because of the significant difference in speed which now doesn't look significant anymore?

That's a first one on here. Care to elaborate?

If you bought a car and then 6 months later the manufacturer brought out a new one with a bigger engine would you expect them to allow you to swap?

BT are trialling 300meg, it's just a matter of time.
If you want to say thanks for a helpful answer,please click on the Ratings star on the left-hand side If the the reply answers your question then please mark as ’Mark as Accepted Solution’
0 Ratings