Our rural area finally had fibre made available to order around the end of June after many years of slow speeds, so naturally i ordered a new package straight away, several delays to my order later, i'm still waiting to be put onto fibre, and i'm starting to get frustrated.

I initially got in contact with BT Live Chat at the end of July after the first activation date was missed, to be told that i would be further updated on the 9th of August, i was told to expect a call that day for more information, i didn't recieve a call. This morning i recieved a text message informing me that BT would be calling, and they did, however, the call lasted literally all of 3 seconds, i didn't even have time to pick up my handset and accept the call when it was hung up, i recieve a text later today to say i will get a further update on my order on the 1st of September, 2 months and a bit after i initially ordered Fibre, you can see why my temper and frustrations are starting to boil over, now i was told on an earlier phone call that the cabinet is at capacity, i've attached a picture of our cabinet details just incase they are of any use, I can live with a few delays to my order, but i am now paying for fibre when i'm still stuck on my old package, could someone advise me as to whats going on, i'm fed up of getting dates for when fibre will be ready only to be let down again. 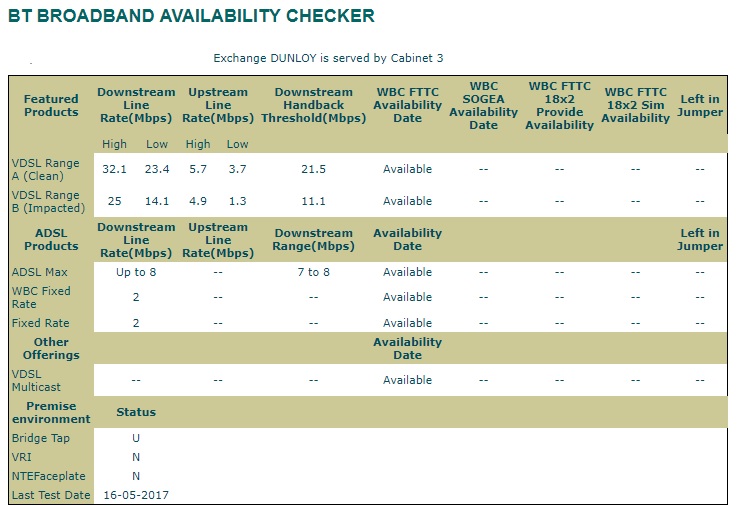 Did it mention anything about a waiters list in the notes below the speed table?

Not that i can see sadly, but i'll post the info anyway

Is the order opened or closed?

If it's closed, have you raised a fault to find out why?
If you want to say thanks for a helpful answer,please click on the Ratings star on the left-hand side If the the reply answers your question then please mark as ’Mark as Accepted Solution’
0 Ratings
Highlighted

Suspect you may need moderator assistance on this one.
If you want to say thanks for a helpful answer,please click on the Ratings star on the left-hand side If the the reply answers your question then please mark as ’Mark as Accepted Solution’
0 Ratings
Highlighted

Order is still open in my account section but it says there has been a fault raised, however the last time i was on the phone, i was told that my order had been put down as cancelled, contradictory to what i see.
0 Ratings
Highlighted

If the order is open you shouldn't be being billed for fibre yet.

Have you spoken to the online order game?
If you want to say thanks for a helpful answer,please click on the Ratings star on the left-hand side If the the reply answers your question then please mark as ’Mark as Accepted Solution’
0 Ratings
Highlighted

I'm sorry your order has been delayed. I'll be able to take a look at this for you. Please can you send me in your details using the "Contact The Mods" link found in my profile?