PaddyB, Activision can't give me the information I need regarding the servers used for COD4 and MW2. And contacting Xbox for information is extremely frustrating as well, so at the moment it's not possible for me to provide tracerts.

Does the HH3 or OR modem not keep some sort of log that could tell you what's going on when I play these games?

To suggest that there is nothing you can do UNLESS I get tracerts to the servers is little hard to swallow because the chances of me getting the server information I need from Microsoft/Xbox is pretty slim.

I have had a look at the tracert you included on post 22 and it doesn't show a problem on the BT network. The problem looks like it is on the last hoop with 31% packet loss. Even just looking at the ping times over the last 4 hoops, they all average over 100 ms. This shows there isn't an issue on the BT Network going by that tracert.

There is surely some sort of problem with BT and EA because the majority of people complaining about it on the internet are on BT. I did a traceroute and ping test through the command prompt because that it probably more accurate as when I use the EA recommended program the results differ each time. 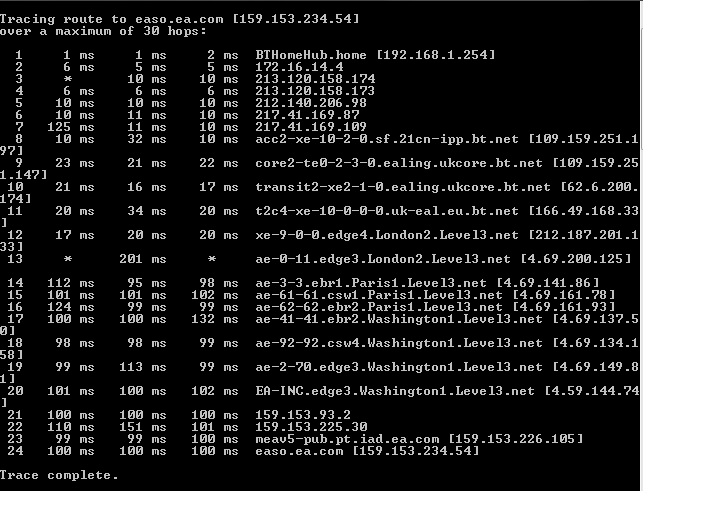 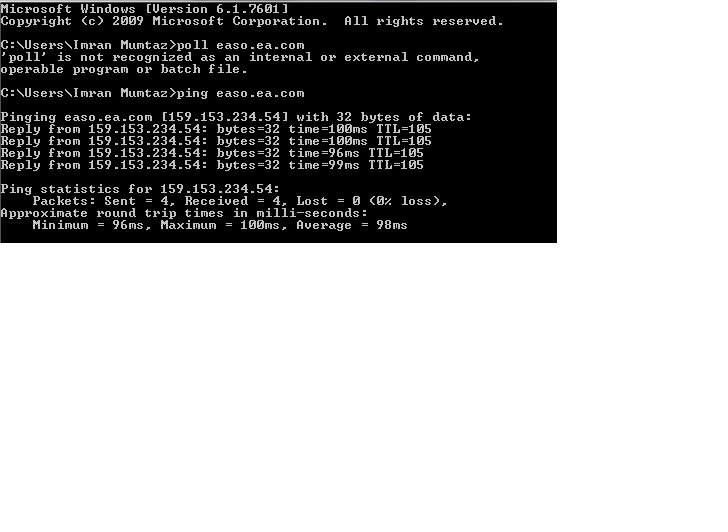 There's nothing wrong on BT's network shown by the tracert.


There is surely some sort of problem with BT and EA because the majority of people complaining about it on the internet are on BT. I did a traceroute and ping test through the command prompt because that it probably more accurate as when I use the EA recommended program the results differ each time.

As I have already said, when I was checking about this I found there were users from all around the world who were having this problem and there were users from all the ISP's in the UK, including Virgin, having the problem. So it is not exclusive to BT.  It may be the majority in the UK were BT customers, which if it is the case, is not surprising given that BT have 6.3 million customers compared to the rest.

I really am getting so many grey hairs from this, I have been actively trying to find out what is wrong for over a year now. When I contacted EA they blame BT and when I contacted BT they blamed EA. It is doing my **bleep**ing head in and I just don't know what to do. I can't play with my friends online because of the terrible stuttering and gameplay. So angry it is beyond belief. Being treated like a **bleep**ing mug by anyone I contact to try and fix this.

You are not being treated as a mug. Many people have tried to help you on this forum by trying to answer your questions and try and find a fix for your problem.

I can't remember if you have tried your device on a friends network or had a friend use their device and log on to your network to see what happens in case there is a problem with your device rather than your connection.

Perhaps for your own sanity it is time to accept that you may never find a fix for it and you will need to move on just put up with it.

I didn't mean the people on this forum. I haven't been able to try it on a friends network but I have family who are able to play perfectly fine online on other devices (PS3). I can play other games on the Xbox without any problems it's just FIFA.


I can play other games on the Xbox without any problems it's just FIFA.

All the more reason that it points to an EA or game specific problem.