I hope you can point me in the right direction. I have a problem with ever shrinking broadband download speeds.

I moved from Talk Talk to BT for broadband in July 2012 in the hope that I could get something faster than the 1.0-1.5MBps speeds that I was getting, albeit through a wireless connection, to my PC in an upstairs room.

At first I had a BT Home Hub 3 and a 10GB monthly download limit, and speeds of about 2-3MB/s which was ok compared to previous.

In October 2013 we learned that super-fast fibre broadband was coming our way via FTTC, and as I am only about 40metres from the cabinet, things were looking up. I changed my package to Unlimited Broadband Infinity 2 and waited for the day to come. That day arrived in March 2014. I had arranged for the latest BT Home Hub 5 to be fitted, and the master socket was changed by Openreach to a dual phone/broadband socket. A friend also recommended that I ditch the wireless adaptor and replace with Broadband Extenders, using the house wiring instead, which I did.

Come the day, 31st.March 2014, and the “Super-fast Fibre” is up and running, and the speed ?, well these two screenshots, which I saved from that day, show what I was getting :- 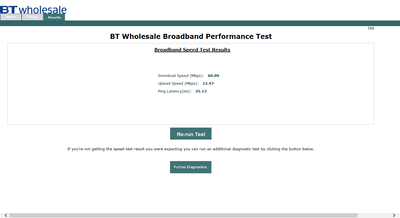 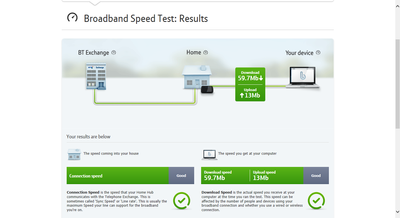 As you can imagine, I was leaping around the room like a five-year-old whose Christmases had all come at once.

It did settle down after a couple of weeks to around 40-45MBps, which I was told to expect, and it stayed around this value for a couple of months. Things then started to go downhill. The download speed then went to about 35MB for a month or so, then 30MB for a couple of weeks, then 25MB…..then 20MB – you know where I am going with this don’t you ?. I am now regularly getting single figures, like this from yesterday morning :- 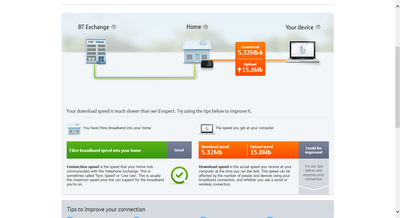 Now, nothing has changed since that day in March last year; same PC, same broadband extenders, same house wiring, same Home Hub. There is no one else in the house to use other devices. If this downhill spiral continues, it will be back to square one, i.e. copper wire speed for a fibre optic price.

Very disappointing, and to make things even more frustrating, the connection regularly disconnects and I have to sit and wait 1,2 or 3 minutes for it to reconnect itself. :-

Here are the screenshots I have just taken :- 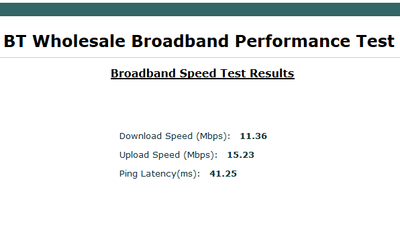 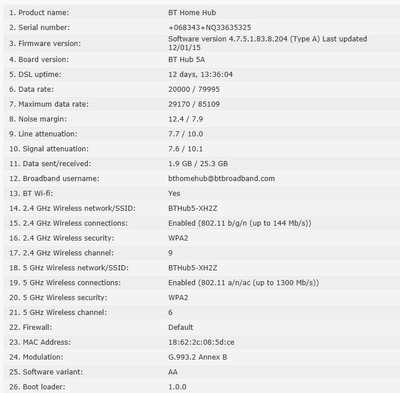 Quiet Line Test (with a corded phone) was a very low, hardly discernible hum, nothing really.

Any help you can give would be much appreciated.

Is there any problems with your exchange. http://usertools.plus.net/exchanges/mso.php

Which exchange are you on?

Many thanks for your quick reply. I have had a look at all those links and no problems are reported for my exchange.

My exchange is Birtley, Co.Durham. 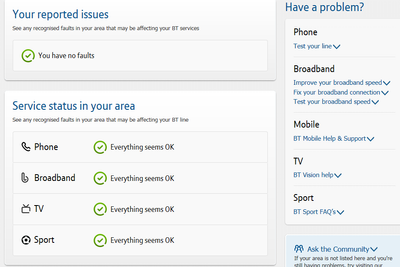 When you say i have the maximun speed for Infinity 2, do you mean potential speed from the stats, or actual speed i am getting, i.e. 10-12MBps ?

Go to solution
both online BT speed testers (diagnostic & wholesale) are not working at the moment - will try again later.
0 Ratings

I myself had an issue with homeplugs in my house. If you can, hook up a laptop directly to the router with a network LAN cable and try a speedtest just to rule the homeplugs out.

ok, now both speed testers are now working, and these are the results :- 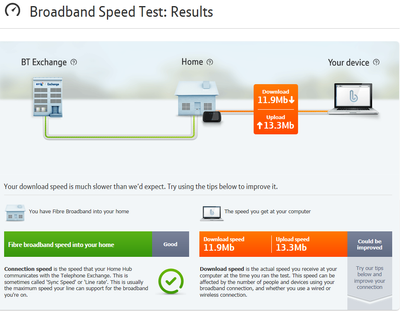 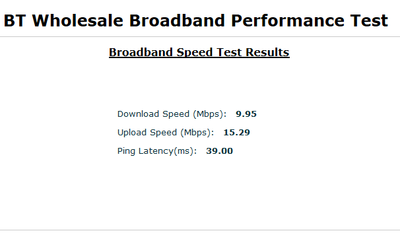 Go to solution
Don't have a laptop I'm afraid, but may ask around.
I would be very surprised if there is any problem with plugs etc. as I had my home fully rewired 3 years ago with new sockets, switches, consumer unit etc. and I was getting 40-45 MBps download speeds for weeks after going live with fibre with the current set-up.
0 Ratings

you really need to check out the problem using a wired conenction to your hub.  if not and you get engineer who then discovers that is the problem then you will get billed£129.99 for the callout