Gradually lose speed every day from 74mb to 2mb

I gotta say I am filled with hope after reading some of these posts that these forum moderators might be my saving grace! Especially the post by @airtime0007 - who has the EXACT problem as me. He got helped by @Keith_Beddoe and @DanielS

I can say right now, I have the same problem as him, im putting all my money on it, its congestion. I moved away from Cornwall because we work from home and our income / work rate is directly impacted by the speed of internet we are on. So we paid for a flat in the best possible location for fibre and went straight to BT for infinite 2. We were happy on the first morning, 74mb as expected. Then slowly through the day it dropped gradually down to 2mb. That has happened every day without fail for over a month. From 3pm roughly, through to 1am. Meanwhile, the upload is a constant high - at 19mb without fail.

I am spitting distance from my exchange. I am really hoping that the mods can just take my word on this that it drops through the day and won't expect me to run even more speed tests over a couple of days. I have been running tests (On ookla and btwholesale) 20 times every day for the past month and the pattern is always the same. I think if a mod just does their check on my exchange, they will see its congestion and hopefully it's fixable as this is having a major impact on us now. We have had a telephone engineer who confirms it isnt a line fault (although 2 indian tech agents have reported a line fault... the other 20 said it tested fine... maybe its a tempormental line.. make of that what you will) - i have had a boost engineer who has tested all my connections and cables and has said himself that its going to be one of two things, congestion or a rain fault (where electric rays mess up the internet) - but its much more likely a congestion thing since it drops at 3pm and gets worse and worse... and then magically better the next morning.

I can't even go into to much depth as to my experience with BT tech support as my head will blow up. But to put briefly, it has been open a month with them and I have been on the phone for roughly 11-14 hours over the course of that time. They have canceled engineers without my consent and then made me wait a further 2 weeks before they send out the next one. They have left me on hold for 40 minutes and then hung up. They have lied to me and even laughed at me and tried to blame my iphone for reducing the speed from 74mb to 2mb - yes seriously, they laughed and said it will always drop when connecting more devices. There is a complaint raised and it is being quite heavily esculated as even the team handling the complaint are surprised by how bad my experience has been.

Sorry if I come across bossy or overly firm... believe it or not, you won't meet anyone more calm and accepting as me - which i guess further underlines how my experience has been so far 😉

Here is some information that I will be asked for about my router... my speed is on the up at the moment as it has just gone past midnight: 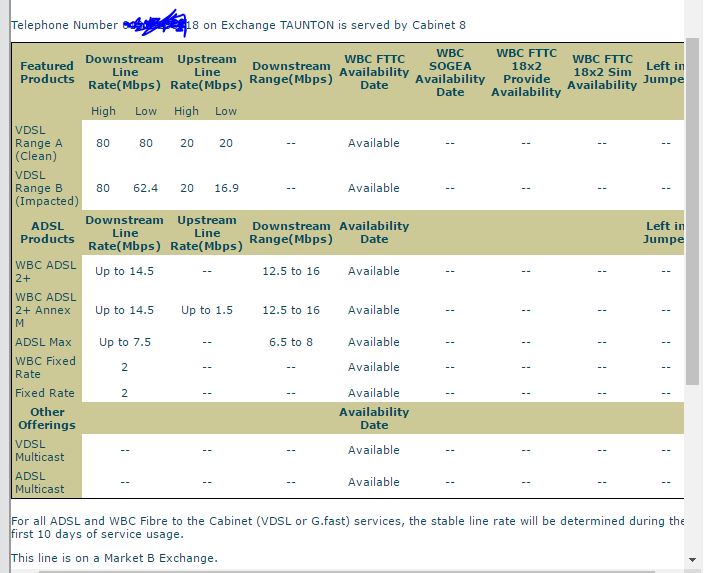 Here is the diagnostic page that seems to be important... currently it is nearly 1am so the speed is starting to increase again (although it is nowhere near the 74mb we should be on it is much higher than the lowest speed of 2mb which we will no doubt get tomorrow late afternoon/evening)

Post another further diagnostics result this evening when the slowdown is at it's worst.

If you can please do as @pippincp has asked, then do no more tests after that, as its the last result which is stored on the server.

Then one of the moderators can raise the issue with BT Wholesale.

Hang in there mate, you should be well on your way to getting some help now. Rest assured the guys on this forum and the moderators are nothing at all like dealing with the normal BT India call centre.
0 Ratings

I'm sorry you've been experiencing issues with your connection. With what you have said in your post it does sound like congestion. Please can you do as @pippincp has suggested and run the BT Wholesale speed test again when you notice the slow down. The reason I ask is because the last result is stored on the system and make it easier for us to get BT Wholesale to investigate.

Once you have run that test, please send me in your details using the "Contact The Mods" link found in my profile. I'll be able to run a few checks on your line and take a look at the network side of things.

Thanks everyone for your input and help - I wish i did this a month ago!

Ok while we wait for the inevitable slowness this evening, I thought id post a screenshot of what we get when everything is working just as it could help in proving my case that the drop in speed is dramatic. 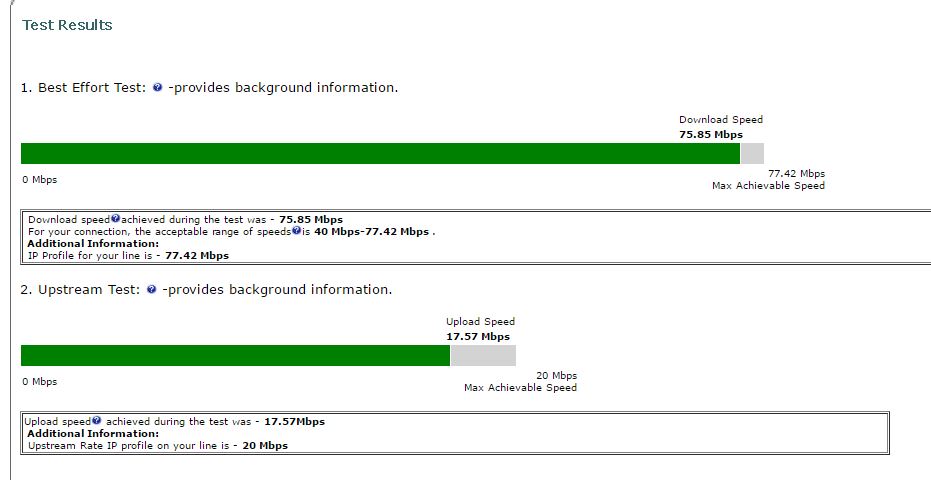 That's OK just make sure that after you do the one this evening you don't do another.

Sometimes on chrome is just skips the page i normally see and goes straight to tap 3 test which i know i dont need.

You could try clearing Chrome temporary Internet files, or use a different web browser.

OK finally got the screen.. heres my rocking 74mb line speed 😄 I will fill the contact form in now for @PaddyB