BT Cust Care people say they can't detect any problems with my connection. The syptoms are, slow and/or incomplete web pages loading in the browser, making it impossible to use for the duration of the outage. This happens on several occasions per day, although some days I might only have 1 or 2

Since then, I started using some software called pingplotter, which is sending a trace route request to google.co.uk every 10 seconds. It clearly shows when and at which hops the tracert failed, either partially or 100%. BT tell they are unable to run such a test themselves - believe it or not.

The first Cust Care person I spoke to was trying to tell me that what I was experiencing is within their acceptable limits, even though some of the outages last over 5 minutes - I told her that it was not acceptable to me. If I was in the middle of a financial online transaction, it could screw the whole thing up. My daughter is having problems completing her university work because it's all stored in the cloud and these dropouts are causing her to lose her work.

Windows does not detect these outages and thinks it is still connected, which could be explained by the fact that most of the outages involve only partial packet losses. So I presume windows still sees activity and doesn't show the dropped connection icon.

I eventually talked to a supervisor, who said she would pass it on to an engineer for further analysis - still waiting for the callback, but it's already over due.

Here is an example of the pingplotter display. The red vertical lines are where the partial packet losses occur (sometimes it's 100% loss). After the HH4 IP, the next 9 IPs are all on BT servers. The graph shows results for IP 217.32.147.126: 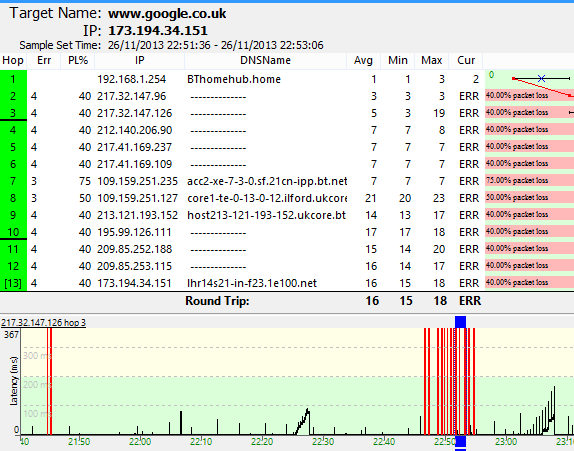 If any mods or BT tech people read this and have seen this before. Please advise me how I get it fixed.

This is wired - I have a separate issue with wireless, but I need to get this one sorted out first

Your homehub may be the problem. To rule it out connect the modem directly to the PC and setup a broadband PPPOE network connection instead. This will remove the homehub from your network and will flag up an issue with the homehub if the problem goes away.

Connect from the modem LAN1 (that is usually connected to the HomeHub/router), to the standard ethernet port on the PC/Mac (that is also usually connected to the router.) So the HomeHub is out of the picture.
- Make a pppoe connection. On a PC it will be something like
- 'network and Sharing Centre',
- 'Set up a new connection',
- 'Connect to the Internet, set up a broadband or dial-up connection'
- 'Broadband PPPoE'
- Then enter username 'bthomehub@btbroadband.com' and password 'bt'.
Detail may vary a little between different version of windows, and of course even more different on Mac or Linux.

Repeat your ping tests and see how they go.

I don't think it's the hub. They sent me a replacement a few weeks ago and the problem was exactly the same. Plus the pingplotter results show that the packet losses occur at IPs that are downline from the hub, and the hub's transfer rates are always very fast, 1 to 3ms.

Just got a call back from BT - the engineer needs to run some more tests, but they're asking me questions that don't seem relevant, such as proximity of the hub to other equipment, which I undersatnd can affect wireless, but surely not a wired connection. Still at least they are calling back when they say they will.

Well, no call back from the engineer. Should I be surprised? Not sure.

Will call them again on Monday.

Have you tried Ray's suggestion?

Go to solution
Eventually got to speak with the engineer, but had to phone the Cust Care people first.

Engineer is still working on the problem, but can't see anything wrong with my connection. He's asked me to monitor the situation for 24 hrs from wired and wireless machines, which I am doing. He's calling me back tonight (hopefully).

So, until the engineer has finally given up, I don't want to try anything that might upset the equilibrium.

I'm still seeing regular packet loss at random times with duration up to 5+ mins. During this time I only get partial download of pages in the browser, making the system unusable.

Will update this thread as and when