Home move - no broadband/phone after activation

I moved house to a new development and despite waiting a month I have no active phone line or broadband.

my activation date was two days ago but nothing happened since.

I spoke to the customer support and was told that the line is fine and connected. It's not.

Now, I'm not an idiot and won't be wasting my time "turning stuff off and on again" in infinity. I don't have master socket only extension sockets in every room. The actual external connection box is outside my property, so I don't need to wait for an engineer either.

When I ring my number, it seems like a normal signal of unanswered call, but when I pick up the phone, the line is dead. Just not really sure what I'm being charged for at the moment.

I've recently been in the exact same boat. Moved into a newbuild, no connection for over 2 months, activation date came and went and still no connection.

I have thankfully had it sorted out, yesterday in fact, and if the circumstances are the same for you then I might be able to clarify things, things that BT seemingly can't.

I too had no master socket, and was under the impression that everything the engineers needed to access was outside of my property. After an hour and a alf phone call to India last week, repeated explaining that 'all of my sockets look identical' (only to be repeatedly asked if 'there's a socket that looks different', or 'is there a socket with two parts') and after repeatedly telling her that I have already tried everything, she eventually agreed to arrange for an Openreach engineer to come by.

He turned up yesterday, under the impression that I had a problem with my internet speed (explained to him that no, that's not the problem, the problem is no connection whatsoever, phone or broadband).

Well it turns out he did need to install a master socket, in fact right by the front door there was a blank socket, and when he unscrewed it revealed a bare end of a telephone wire with tape around it. Clearly left by the builders ready for BT to set up.

The developers had assured me BT had done everything they needed to do, but they obviously hadn't, and I had no idea that blank socket housed a loose telephone cable.

BT had assured me that they didn't need to access my property.

Well this helpful Openreach engineer installed the master socket, got on the phone to one of his 'buddies' down at the exchange whereever that was, and between them managed to connect me.

Nothing like a face to face converstaion. If I'd had that from the start, instead of messing about with India for months on end, it probably would have been sorted months ago.

So my advice is to arranged an engineer call out, and explain everything to them in person, even if BT are telling you that you don't been to be present, be there anyway, BT are almost always wrong.

This of course relies on the engineer actually turning up (I had wasted a day of annual leave befor ethis wiating for a engineer who never showed) and while the guy who came yesterday was very helpful, I expect that's not always the case.

Ok, an update. Nothing to report.

Nothing has changed after few chats. Just had the same robotic questions "how I'm connected" and that "everything seems fine". The chat keeps disconnecting, because I have very poor reception here, like all my neighbours. I was told that there is a problem with exchange and the service will be on within a couple of hours. Nope.

I asked questions on Twitter which were answered by Jennys and Lisas or whatever with the same request to follow a link to a chat. The same generic questions again. Keep asking me to check my phone or telling me that my hub is not connected. Well, my line is dead and has been since the activation date.

I've tried again today. The adviser said that "she" can request technical team to contact me, but it will take another 72 hrs. No, thanks. I have two fault reports opened -one on 15/10 and another today. They said that engineer will visit me on Wednesday, but it's not ideal, because I can't miss any days at university and have to do the school run every day too.

I'm just not sure why the engineer didn't come up in the first place as booked (on the 14th)? I was sent a message that he doesn't have to after all, because my house is prewired and everything is connected. It doesn't seem to.

I can't go online or make a phone call - I have to fill up many forms after the move a month ago (council tax, HMRC, DVLA, NHS, change of school and so on) and all my university coursework is accessed and submitted online too.

Now the BT send me reminder to pay the bill. It's not going to happen, as they haven't provided any service at all. It's a second bill at this address.

I'm bit annoyed that I can't cancel the contract now, as it's over 14 days. My neighbours who went with SKY have been up and running for a couple of weeks now. I'm very very frustrated.

To make it more interesting, when I call my own number, some woman annoyed answers.

THis is beyond a joke. I've lost a day and had to pay someone to collect my daughter from school and look after her till 6PM. If this engineer turns up right before the deadline, I won't be here anyway. I don't know why he has to visit me, as the connection box is located downstairs in the communal area.

It's a farse. After waiting all day I contacted customer advisor who said that they actually forgot to book an engineer's visit.

Thank for nothing, useless idiots.

Go to solution
Did you contact NeilO as requested on this post?
https://community.bt.com/t5/Bills-Packages/House-Move-Can-t-get-connected-to-Broadband/m-p/1546422#M... as he will be able to help you
0 Ratings

He never requested. He just sent me a message to the chat. I've been dozens on times on the chat. They even scheduled a visit, but nobody arrived. 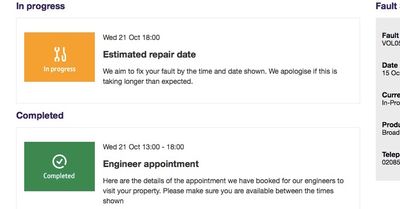