The negative of replying on a phone is i never check spelling. Fox = fix obviously

Hopefully this fixes it. I'd like to keep the case open for now of I can just in case nothing happens by the 29th or if it still occurs plus id like to know if the hub team found anything from Robbies request

Thanks to everyone so far - getting there!

Just received the below via text

Hello, BT here. Sorry about your fault. Your phone should be back to normal now. If you set up Call Diversion, you can cancel it by dialling #21# from your landline. If you've got broadband, you might need to restart your hub and wait up to three days for your broadband speed to get back to normal.

....except for nothing is fixed and all I get from.my phone is huge static and no dial tone
0 Ratings

Just called BT again and they, on repeat, just said it will be fixed at 5pm on Tuesday and that's my engineer visit time.

That's not my visit time, that's the estimated fix time. If I look at the fault tracker I can see an engineer was at my location at 8am this morning and reported the issue as fixed at 9am. According to bt this is resvoled, but it's far from that as it's still broken.

I need to try and get hold of the engineer if possible and get him to turn around. Does anyone know of a way if bypassing the 151 people as all they say is they are booked for 5pm Tuesday which is false

I called them back, and was first of all told my engineer visit was 5pm on Tuesday (that's the time they hope for the case to be fixed, not my appointment time). After giving up talking to that person i called back, and was then told the engineers have been informaed and they'll go back this afternoon to check again.

Both statements were lies, none of that happened / was every going to happen.

Luckily this forum exists, and Robbie called me today to go through everything. After a call to the openreach team an appointment was booked for next Saturday (not happy with the length of time, but that's not the fault of people here) and we'll go from there.

Thanks to everyone here so far, BT's standard support is utter trash, i feel sorry for anyone who doesn't know these forums exist

Apologies for the lack of response, i've left it to BT for the last week or so to look into, however i had something new happen to thought i'd post here.

I had an engineer visit on Saturday and he sorted the phoneline. The issue to down to an old cabinet, and the fact that, over time, anything heavy going past it will knock out the cables. It's on a main road also, so this won't help matters.

Anyway, he fitted it all up again and took DLM off, and hoped that would be enough. I had a call from Robbie on Sunday to ask how it was an it all seemed fine, however since then the drops have come back, so no luck with that being the problem.

The question i have is, this morning i recieved an email from a named BT engineer, bascially saying they found the problem and the fix needs an engineer visit. That's great if they have, but do named BT employees usually email customers out of the blue with fixes? If so then awesome! But it sounds too good to be true.

Has anyone else heard of this? I believe @RobbieMac is calling me tomorrow for an update so i'll ask then, but if anyone can shed some light on this then that'd be great, first time i've seen it and i'm always wary of scams.

Replace your router. I had the same issues and was given the same run around by BT.

They broke your home hub with the firmware update.

The TD-w9970 by tp-link will hold onto your connection and prevent your downstream noise margin from fluctuating.
0 Ratings

@RobbieMac is in later on today and he'll give you a call then.

So a second engineer visit happend this week (not as good as the first guy). He didn't both testing in the house and went over to the exchange, did some work and said it was fixed.

The only pattern I can see is in the router stats on the line
Over time the number on the right drops until a very low number and then the router will restart. The time it takes to do this is random, but the pattern is always the same. An example is below
Restart
15 / 7
15 / 6.8
15 / 6.4
15 / 3
15 / 1
Restart
15 / 9
Etc, there's no pattern for the time it takes. But it's always the same reason for the connection to drop. If it starts at a higher number then the uptime will be longer
This is how it looks right now, it started at 15.2/9 today (i expect a dropout any minute). Is anyone able to tell me what could cause this? 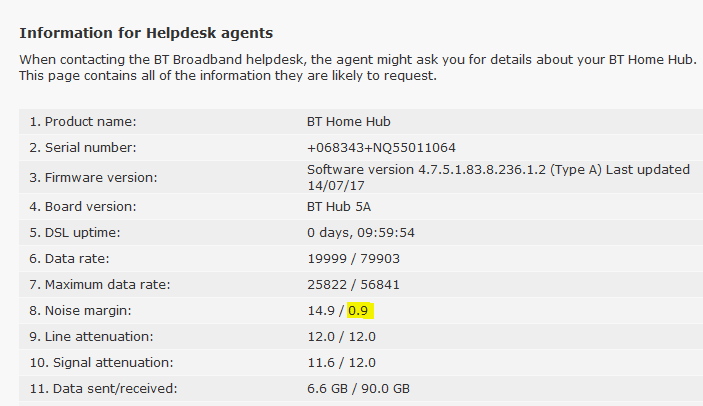 The noise margin problem you are describing is exactly the problem that BT introduced with their software update.

They broke your router with the update.

You need to go and buy a 3rd party VDSL router.
0 Ratings