I lack the words to describe my contempt for the level of service provided by Yahoo! Mail (or rather I lack such words that if used would not result in my being banned from the forum).

1. When I attempt to Manage Mail Options having logged in to BT Mail via the bt.com homepage I am repeatedly asked to re-enter my password, only to be taken back to the main screen. An attempt to repeat the process results in the same thing happening, so I'm stuck in an infinite loop, and unable to Manage Mail Options! If it helps I'm using Firefox 50.0. Also I will admit to having changed my e-mail password some 15 minutes before I attempted this seemingly straightforward operation, but was informed that waiting 2 minutes before logging in again would avoid problems. Why you might ask did I need to check Mail Options? Well, that brings me to  . .  .

2. As I've previously posted in this forum, Yahoo! Mail is frequently prepending "[Bulk] " to e-mail Subject lines for seemingly arbitrary reasons. I use an e-mail client and opt to download items placed in my Spam folder as well as my Inbox because I know from past experience that the Spam filters are such rubbish, and frequently label e-mail as Spam when it isn't. Hence almost certainly this is the root cause of my problem: e-mail that ought not to be treated as Spam is being, and this is not a rare event. So, a question: what are the criteria used by the Spam filters to determine [sic] that an e-mail is Spam? I myself believe from observation that any e-mail containing only a hyper link, and any e-mail sent to more than one person qualifies for this erroneous treatment, but I don't think this is an exhaustive list. In any event if these criteria are configured then the policy is over-zealous.

This service is unacceptable. PLEASE BT, PULL YOUR CORPORATE FINGER OUT AND FIX THESE PROBLEMS! And please do not attempt to make the case that it's a Yahoo! problem, rather than taking direct ownership of it because I and many other people have e-mail addresses within the btinternet.com e-mail. And what has happened to the much vaunted BT Mail service that was supposed to replace that run by Yahoo!? Has that project failed?

Would someone please investigate the issue that I raised in my posting concerning the frequent erroenous prepending of [Bulk] to the subject of e-mails?

The unnecessary [Bulk] was in fact the second problem identified in my post, but it continues to recur and I want it addressed.

I suspect that my first problem was covered by the Mods' message to the effect that e-mail login problems were now understood and in the process of being fixed.

I cannot however see a reference to any comparable grasp of what underlies the appearance of [Bulk] however, and it is now several days since I posted.

If you check you will probably find that [Bulk] is put on by your email client and not BT.

I appreciate you replying but I have to say that I would be flabbergasted if my mail client - I use Outlook 2003 - was responsible. I have just looked through what appear to be relevant areas of the configuration options and can see nothing relating to this.

There is an article on the net in which the suggestion that th email client is responsible is argued against. If we're allowed to include links in postings this is it: http://www.pcreview.co.uk/threads/why-does-outlook-show-the-word-bulk-in-the-email-message-subject.2...

I'm afraid that I remain convinced that spam filters somewhere are responsible, and I suspect that it is BT Yahoo! Mail's spam filters in particular. I'm pretty sure that when my mail client downloads an e-mail via POP3 the fact that [Bulk] is prepended to the subject proves that BT Yahoo! placed it in the Junk/Spam e-mail folder on the server. I have configured to download from this folder as well as the Inbox because if I didn't I don't think I'd ever receive any e-mail at all!

I've done a few tests to various trusted contacts, but they have proved inconclusive.

Is anyone else suffering from this problem?

Would the Mods please investigate?

On the server email in Spam folder with no [Bulk]

In my Outlook email client, same email [Bulk] in the title.

Agreed Spam filters useless but evidence suggests [Bulk] is put on by the client.

PS If you look at the email header it will contain

So Yahoo identify it as Bulk.

If you set your webmail up as Basic then you have the option to download emails from the SPAM folder with no special indicators which may stop [Bulk] being put in the title.

@FrustratedCustomer68At some point you would have configured your account to download mail which BTYahoo deemed to be spam to your client prepended with the word 'Bulk'. This configuration option has now changed and the mails can be prepended with 'Spam'. The fundamental problem, however, is the mis-categorisation of mail as spam in the first place. 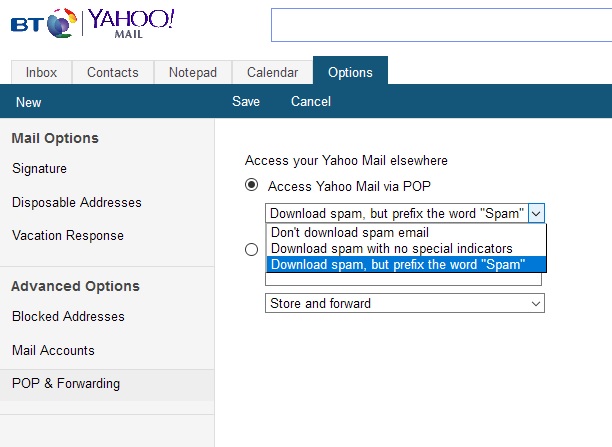 Thanks for the replies to my post, and apologies for the delay in writing back.

Responding first to licquorice's post, I did indeed do what you suggested that I did way back in 2013 when I was a victim of an unforgiveable engineering failure by BT, the details of which are contained in this now rather lengthy exchange:

The currently available mail configuration options may well have changed since, and in the way that you illustrate, but I would guess that those that I set in 2013 remain in place, even though there may no longer be a method by which a user can change them. If this is so, then we have another engineering failure, but this one is of less concern. Incidentally I would like to have checked my current configuration, but cannot do so apparently because of the first problem that I raised in my first post in this thread.

The bottom line is however that you are surely correct when you say that the problem results from the Spam filters being utter rubbish, and far too keen to identify a false positive. This then results in e-mails erroneously being placed in the Spam folder on the server, and thence to the annoying pre-pending of [Bulk], and indeed its repeated appending so that in an e-mail conversation I frequently see '[Bulk] Re: [Bulk] Re: [Bulk] Re: [Bulk] <the subject>'. WILL BT YAHOO! PLEASE FIX THE SPAM FILTERS! I wonder whether the problem somehow arises from using the same servers to perform snooping for targeting ads and/or for the intelligence services, but no doubt we won't be told.

Although not an issue for me, as far as I know, given the utter uselessness of BT Yahoo!'s spam filters, anyone who does not download e-mail from their Spam folder will surely be losing messages. I'm sure it can be claimed that e-mail isn't a reliable form of communication but people nevertheless rely on it to work most of the time, and if people's e-mails are getting lost this is a serious service failure.

I wonder whether BT wants everyone to switch to Gmail or somesuch and is making life difficult in order to provide motivation to do this. I can well imagine that having to provide an e-mail service is a nuisance particularly since the failure to transition everyone to BT Mail.

Another possibility is that BT doesn't like people using e-mail clients, because then it can't serve ads or low-grade click-bait.

That is the result of setting the option to download and prefix with 'Bulk' . You can then set a rule in Outlook/Thunderbird/client of choice to filter the mail according to the header. Which is what I do.

a) an option on the server to download Spam and yet not prefix its Subject with anything, or

b) as a workaround, a means of applying a rule when mail arrives in the Client to edit out the '[Bulk]' or whatever string from the Subject. I want these (almost always erroneously classified) [Bulk] e-mails, of which there are many, simply to go into my client's Inbox - which they do - but without the original Subject having been changed. I did try to find a means of setting a rule to remove [Bulk] from the Subject in Outlook, but while I do use lots of different rules for sorting mail based on various criteria, I was unable to see how the Subject can be altered. Perhaps there's a scripting solution but this is currently outside of my knowledge. Also I'm afraid that I haven't enough experience of Thunderbird to know whether one can set a rule of the kind I've described.

There is also another problem with over-zealous spam filters. E-Mail placed in the Spam folder will be removed if it hasn't been downloaded after a period of time (configurable up to 28 days last time I looked). Hence not accessing an account for this length of time could result in loss of e-mail.

Already an option, see my screenshot.

Agreed that the spam filters are a complete shambles.