Hi folks, been having some issues with slow broadband. When it was first "installed" in late August they didn't actually make the connection in the cabinet, so eventually got an engineer out on 7th september, he checked all the internal wiring and said it's OK, went and checked the cabinet and got it working, was getting essentially the advertised speed- 39Mbit down and 9.9 up -type speeds. This was at 10am on a monday morning.

As of about 2 weeks ago it is a lot slower. Done some speed tests and its about 1-3 in the evening and weekends, 7-20 overnight. I live in south manchester so I have a sneaking suspicion it's related to the large numbers of students who have moved in about 2 weeks ago.

Not quite sure what the best course of action is, I really don't want to have to take another day off work as I had 3 when it was first installed.

Here are stats when it's plugged in the NTE5 test socked 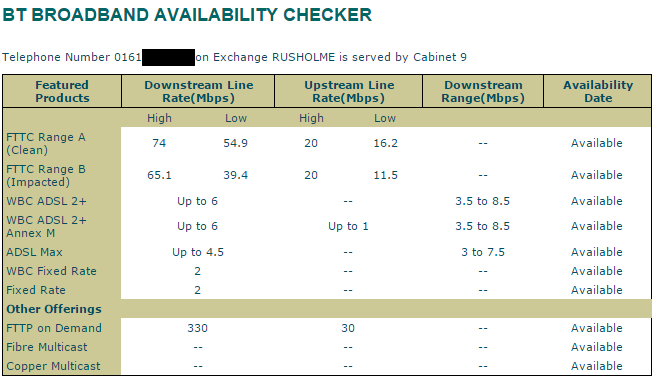 Some stats when on wireless on the other phone socket

Looking at your stats etc does seem to comfirm congestion at the exchange.

OK, is there anything I can do about it? I wouldn't mind if it was 38 dropping to 20 but dropping to <2 is ridiculous

Although we're seemingly opposite ends of the country, I'm seeing very similar issues with my Infinity 1 - see my thread here.

Off-peak I see cracking performance (38Mbps or thererabouts) but, like you, from 1600 until 2400 download speeds drop off a cliff - down to around 1 or 2Mbps.

Does anybody know if there's anything that can be done and if so, who we'd need to contact in order to escalate the issue?

This is very similar to what i'm experiencing too! If you have steam by any chance are your downloads just as slow or are they in line with your off-peak speeds?

I am from south Manchester and getting getting 1.6Mb

Download speedachieved during the test was - 1.61 Mbps
For your connection, the acceptable range of speedsis 20 Mbps-38.72 Mbps .
Additional Information:
IP Profile for your line is - 38.72 Mbps

Upload speed achieved during the test was - 7.8Mbps
Additional Information:
Upstream Rate IP profile on your line is - 10 Mbps

I hope you could be of assistance.  I subscribed to Unlimited Broadband with BT Infinity 1


Telephone Number xxxxxx on Exchange RUSHOLME is served by Cabinet 77


Download speedachieved during the test was - 1.61 Mbps
For your connection, the acceptable range of speedsis 20 Mbps-38.72 Mbps .
Additional Information:
IP Profile for your line is - 38.72 Mbps

Upload speed achieved during the test was - 7.8Mbps
Additional Information:
Upstream Rate IP profile on your line is - 10 Mbps

The problem is perseting for two weeks now, I have used the chat to contact BT & even call.... problem still not resolved

Speed of 1.6Mb is unacceptable.

Re: BT Infinity 1 <2Mb at Manchester

Please delete the vol ref for your security

i have asked mods to help

Re: BT Infinity 1 <2Mb at Manchester

Cheers imjolly you are a hero. Syafiq you are not alone we'll fight this together!
0 Ratings