New to the forum and new to Infinity so go easy on me...

Was using Total Broadband until a few days ago.  Using the BT speed tester [ADSL and FTTC option] used to give upload, download speeds plus IP Profile information.  Plently of posts show screen shots of Infinity tests with this same checker, but it errors out for me each time I try to use it now I'm on Infinity.

Trying to work out what the profile is with the new connection but the beta speed tests linked from the Help pages don't give that information.

The new Openreach modem is [unless I hack it] a brick to me...?  There's no way I can get any information out of it I assume...?

Waiting for my 10 days to elapse before I can be sure that the circuit has settled correctly, but right now I'm getting 47Mb down and 16 up which is significantly less than the estimated 66.5 down and 20 up.

I was previously happy with the speed from Total Broadband, partly because I was getting over the estimated figures [after a line fault was fixed] and partly because it was a good overall figure based on my distance from the exchange.  Measured speeds were 15mb down and 1.1mb up, estimated were 12mb down and 1mb up.  Thus what I'm getting now is a bit disappointing really.  Don't get me wrong, it's still significantly more than I had but below the expectation BT set.

The trend from the BT beta speedtest site, and also speedtest.net, shows a gradual drop from the initial speed test results of 54mb to what I now see....

It can take a few days for the Wholesale testing systems to be updated with all the new circuit details and match them with your telephone number etc.
If you want to say thanks for a helpful answer,please click on the Ratings star on the left-hand side If the the reply answers your question then please mark as ’Mark as Accepted Solution’
0 Ratings

Turns out I was using the wrong speed checker....

when I should have been using http://speedtest.btwholesale.com/

Now I get the data, but not the answer I wanted.... 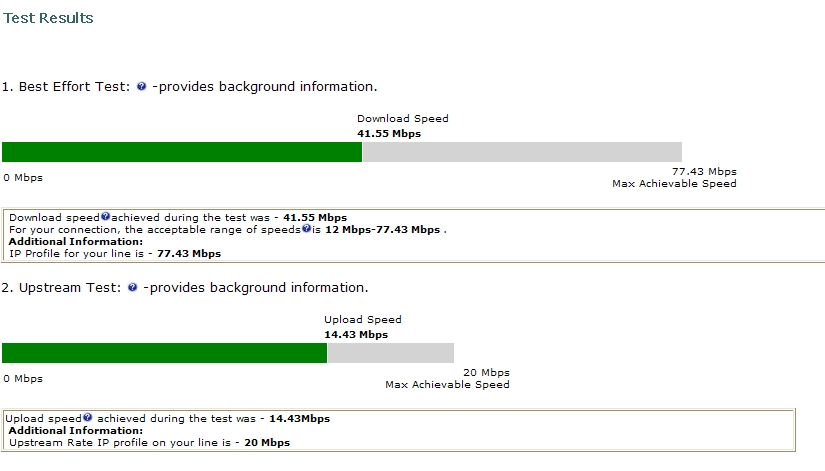 Have you tried speedtest.net ?  That may give you figures closer to your profile.  Also try at different times of the day - just to be sure the speedtesting website isn't the bottleneck.  Morning (e.g. around 9am) seems a good time to use speedtest.net

But regarding your upload speed, don't expect to achieve anything more than about 16.5Mbits/s to 17Mbits/s, even though you're syncing at 20Mbits/s - no-one does (with the exception of those who have unlocked their modem and disabled the QoS feature, who gain another 1Mbits/s to 1.5Mbits/s).

Odd, I find that http://speedtester.bt.com/ gives me profile information straight off along with the speedtest results, but http://speedtest.btwholesale.com/ does not unless I run extra diagnostics for which I must log in as speedtest@speedtest_domain.  What a shame they don't just let us read them off the unhacked modem.....

I think the speed tester is pure nonsense.
I just did a test, it says my download is 3.92mbps, upload 8.72mbps. My IP profile is 20mbps

Upload a similar size database at 1.4mbps.
lol, I still maintain the speedtester is horribly coded.

I have been trying Speedtest.net, and found them to be slightly in advance in terms of speed but not a great deal.

Been trying different times of the day as well.  The results seem to be roughly similar throughout the day - give or take 5mb - which is fine.

Hopefully once the bedding in period finished I'll be getting closer to the profile on the download.  The initial speed tests were around the 54mb, now they are bouncing around the high 40's...

I was going to post a BT speed test for comparison, but now both the BT speed testers are erroring out in the same way.....

Wired or Wireless?
If you want to say thanks for a helpful answer,please click on the Ratings star on the left-hand side If the the reply answers your question then please mark as ’Mark as Accepted Solution’
0 Ratings

I'm thinking that is wireless as it gives half or just over when i do it wirelessly but upload speed always comes out to the max, The line looks really good to have an IP Profile of 77Mb. If your not doing the test wirelessly i would say something was a miss

Actually that is wired.

That was why I was so keen to find out the IP Profile, but for reason's I don't understand the BT Speed checkers seem to keep erroring out on me.  They do the actual up/download tests and then error out before displaying the results.

I found the link to the BT Wholesale speed checker in the forums in one of the posts I read doing some research and amazingly that worked, but only the once.

Now I know that the line appears good I can start checking other things.  Swapping cables, using my son's laptop instead of my desktop etc to try to isolate the issue.  It's always possible that the problem causing the slow download is causing the tests to fail too.....

My desktop is at the end of a long ethernet cable - well within the 100m allowed in the standard - but if that's damaged that could be it.  I can take a shorter cable and his latop and try right next to the homehub to see what changes.  Unhooking and replacing the cable to my desktop will be a nightmare of a job and I didn't want to start down that route if the IP Profile was 53mb and my download was 50mb..!

Looks like I have a fun weekend ahead of me...!