Ok where do I start? Well lets stick to the basics, I am a hardcore gamer, I mostly play twitch games and latency is extremely important to me (no really, it's that important), download not so much, couldn't care less about throughput, it's precisely why I left Virginmedia.

Anyway for almost a year and a half I've had an average ping of 5-7ms when trying to ping google.co.uk, bbc.co.uk or just general game servers within the UK. Download would vary 56/10 or 60/10, not bad didn't care though loved the solid gaming I was enjoying up until now.

So for the last 5 to 6 weeks (I thought it would have gone away but it hasn't) I'm constantly sitting at around 22-23ms with a constant 45/10. I have not changed my setup or anything (my internal network is perfect, I cannot stress this enough), I've made numerous calls in to BT and pretty much get shut down and fobbed off, I've now also installed a BTHH5 to save confusion since the support over the phone can't seem to grasp the concept of a personal ROUTER (R7000) + VDSL2 MODEM (BT Openreach) setup and blaming my hardware for the fault/issue.

Ironically now the BTHH5 is installed its worse, 23-25ms with a constant 43/9, I've called and asked for them to force a re-sync which can take up to 3 days and surprise, it's still terrible.

Honestly what have you done? I thought it may have been G.INP being enabled and ruining my openreach modem (ECI /R Rev.B) but now I'm forcing myself to use the BTHH5 to remove any element of doubt; I can't help but think an engineer has thumbed my line into an ADSL line at the cabinet.

I have gone over everything possible internally within my home to ensure it is nothing to do with me (why would it? It's been working absolutely fine for just over a year in the first place).

I'm getting annoyed beyond belief with the "take it or leave it" attitude by support on the phone. Seriously if you were paying for a premium line and it was suddenly running 4x worse would you not get frustrated? I know the line is capable of 5-7ms, I also know my friends on standard ADSL2+ are connecting to servers and getting better latency than me now.

I'm at a point where I want to leave and see if the grass is better elsewhere. Something tells me no one within BT can help since it's more than likely a job requiring an engineer to look at the cabinet just down the road.

Can someone in BT help me or should I just go through the hassle of switching and be done with it?

As you have a Homehub 5 can you also post the stats from 1-12 by logging onto the homehub management pages then troubleshooting > helpdesk. http://bthomehub.home/
0 Ratings
Highlighted

Really appreciate you replying to my post, as per request please see below: 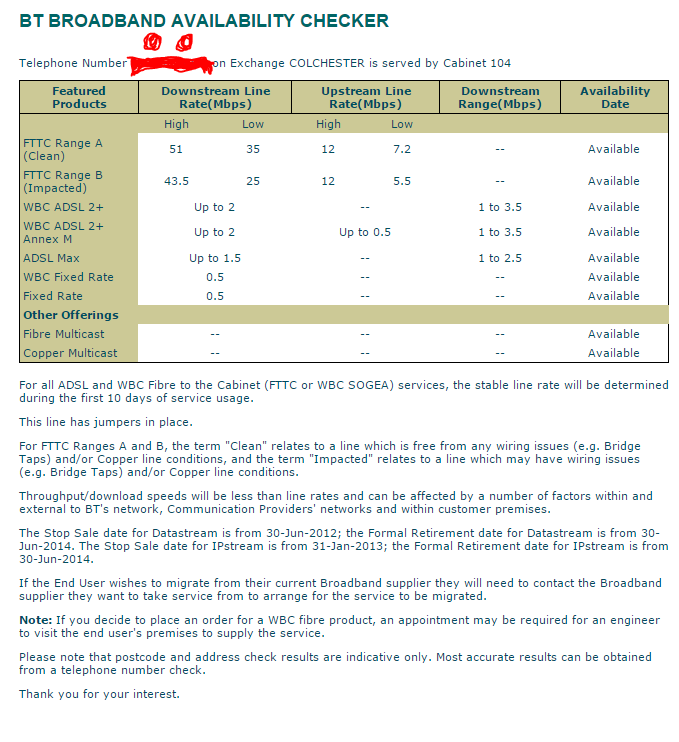 Oh, unlucky you. Your on a ECI cabinet with a HH5B - less chance of fastpath and no chance of G.INP.

It would be a better idea to use your ECI modem.

@john46 There is a website which you can use to find information on cabinets that have been upgraded and what type they are (it also tells you when they went live and whether it's FTTC or FTTP). Presumably, @oliver-munn used that website to find out more about the cabinets on the Colchester exchange (see dslchecker picture, which just blatantly states the cab/exchange). I won't post link here in case it's not allowed, but search up "telecom tariffs uk" and you'll find it. 🙂

just searched for telecom tarrifs and cant find anything to show cabinets etc.....

If you enter as suggested then it is the first one listed by Google. Just open and then enter exchange and then lookup

@shamus1 There should be a link for "CodeLook" on the telecom tariffs homepage. Click that, then search by "Locality" for "Colchester", one of the entries should be "Colchester, Essex". Click the "Colchester, Essex" link and then there should be a link for "All 127 Fibre Cabs". Click that link and then you'll see the information for all the cabs on the exchange, which will give you activation date and the cab type, as well as the number of properties who have been connected to the fibre cab and enabled for the service.

Clicking on a cabinet number (eg Cabinet 6) will give you a list of postcodes served by that cabinet and the percentage of users on those postcodes connected to the cab.

Hope that helps. You can use it on phone numbers as well (full or partial), as well as any locality in the UK. It's a useful site, tells you a lot about the rollout, which cabs are enabled/not enabled and coverage. 🙂