I guess my "problem" is nothing compared to some I read here, but thought I'd throw it in for discussion anyway.

In summary, from the Helpdesk page of my Home Hub 5A I see a maximum downstream data rate of approximately 54 Mbps, but it never seems to sync at anything above approximately 33 Mbps. The upstream is pretty much spot on.

So for some more detail.

My Infinity 2 service always gave me a data rate of approximately 33 Mbps downstream and 10-12 Mbps upstream. Aside from usual minor fluctuations, upstream and downstream noise margin were both always around the 6dB level.

Early January there was an issue where the upstream data rate changed to ❤️ Mbps and it stayed like that for nearly a week. Over the next few days I monitored it and did the usual throughput tests etc., and eventually called BT. After explaining the issue they did their remote diagnostics, had me power off/on the Home Hub etc., and then arranged for a boost engineer to come.

At this time I started logging the details from the "helpdesk" page of the HH with the RouterStatsHub program. A few hours after I reported the problem the service went back to normal (see RouterStatsHub log below), but I decided to let the engineer come anyway.

When he turned up the following Friday the service was still running OK so I wasn't entirely sure what he could do. After discussion, and some confusion as he said he wasn't a boost engineer but was there for a BT Vision fault that had been fixed earlier that week, he said he'd change the socket. At the time I had a Type 4 faceplate with the Broadband Accelerator/I-plate which he changed to a Type 5 SSFP Infinity faceplate.

When I looked at the stats after we reconnected the HH I immediately saw some significant difference, specifically the downstream noise margin had gone to ~12dB and the maximum data rate had gone up to nearly 54 Mbps.

I thought DLM would come into play so wasn't immediately worried that the line sync was still only 33 Mbps.

The service has been reasonably stable since the faceplate was changed. Looking at the WAN log on the HH I saw connections lost or reset on 20-Jan, 21-Jan, 23-Jan, 26-Jan, 04-Feb and 06-Feb, but then not again until 11-Mar. While there were six resets within 17 days (20-Jan to 06-Feb) the events on 23-Jan and 06-Feb were when the system was rebooted by BT. I also think the 11-Mar was also a BT triggered event as there's TR069 activity at the same time.

Despite the initial string of connection losses, I'd expect that if DLM were restricting things the stable period between 06-Feb and 11-Mar would have been sufficient for it to change things.

So I have hree questions

I'm thinking not based on the fact I've seen posts e.g., HELP ME: My BT Infinity 2 Connection Speeds are slowwwwwwwww where data rates of 19999/79999 Mbps are being achieved with noise margins of 15.5/10.6, and the explanations of SNR margin I've seen e.g., SNR margin, line attenuation, ADSL and a slow internet speed indicate high SNRM is a good thing. From the aforementioned:

A higher number is better and the numbers bellow [sic] 6dB may cause problems."

Q2:- Is the downstream data rate not running nearer to the maximum date rate of ~52 Mbps because the IP profile is limiting it?

I checked the IP profile over at Mouselike.org UK Broadband Tools and it's indicating the following:

At the moment any speed test I run tells me the service is fine, but I don't think it's as good as it could be, and hence looking for confirmation from those with far more knowledge of this than me. If I report this am I likely to get anywhere, and is there any advice to help the process?

c  from what you ahve posted all the previous resets/drops in conenction have resulted in a banded profile.  this takes time often weeks to release fully and all you can do is maintain a stable connection and DLM should start to reduce youe noise margin towards 6db with corresponding increases in data rate getting closer to attainable

Thanks for the prompt response, and noting the typo for Q1.

For Q3, as I pointed out the line was up and stable for five weeks from 06-Feb until 11-Mar. Is that not sufficient time for DLM to sort itself out?

The example in the link you provided talks of being placed on "barrier" 8 or 24. It then goes on to say that DLM would change the profile after 9 or 25 days, depending on which of those barriers the line is on. Either way, with a stable line of five weeks shouldn't DLM have sorted things out?

Thanks again for the response.

I understand it's the length of time the line has been connected that's important. The current connection time is only two days as we had a power failure this week, but the period I'm questioning is between 06-Feb and 11-Mar.

From the WAN log of my HH we can see the line disconnected on 11-Mar and at that time the hub logged PPPoE down after 48359 minutes, or 33.5 days.

The question I have is, if the sync speed is not getting closer to the maximum data rate due to DLM, why was five weeks of stability not sufficient time for DLM to react and adjust things? 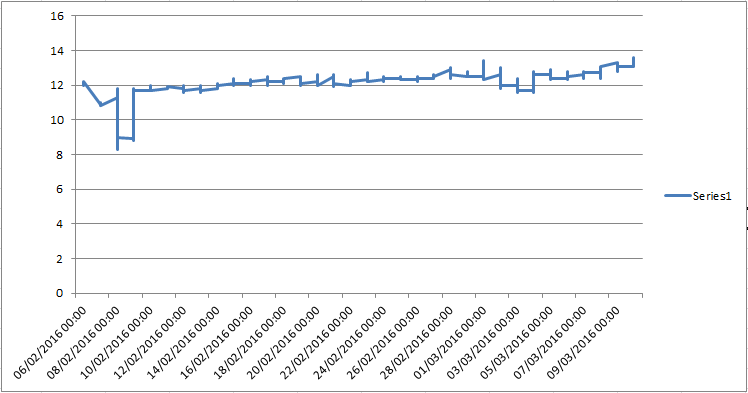 As can be seen, the noise margin drops for a very short period on 08-Feb, after which it goes back up to approximately 12dB.

Are you saying that five weeks is not long enough for DLM to do it's job?