Ive been with BT nearly 3 years now and have always had terrible service, nowhere near the speeds as advertised on the speed checker. When I was on ADSL I was obtaining 2mb down when the estimate was 4/5. I upgrade to infinity a year ago and only got around 10mb down on a 30mb estimate. Recently I renewed my contract, was sent a home hub 5 and upgraded to infinity 2 in the vain hope that would resolve my issues. I now obtain between 13/14 down and 0.75 up. The checker and CS still say I should be getting around 35. Now I have a new problem where the router reboots frequently each night, so its almost worse than before!

After numerous calls to CS and hours and hours on hold being passed between departments I am at my wits end. Ive been told I would be called back 3 times in the past 2 weeks but nothing. Ive waited in all day for an engineer twice, but nobody has shown up. I had one engineer come out, waited all day, he showed up at 4pm, then promptly said at 4:30 he was clocking off, didnt have time to finish it and someone would come out tomorrow. Guess what... nobody showed.

The guy who did come said the problem isn't in my house, he was obtaining the same speed at the pole, but he didnt have time to go down the road and resolve it. Im maybe 800m from the cab.

My problem is I just cant get through to anybody who can deal with my issue, anybody to complain to or anybody that seems to have a clue what they are doing outside the usual scripted stuff. I cannot bear to phone CS one more time to go through the whole 2 hour dance of rebooting stuff when an engineer has already said the fault lies up the road somewhere. Yesterday I spent 2 hours being bounced between the phone line team (when I had called the 08001114567 broadband line) and couldnt even get through to the broadband team. The phone guys were adamant they couldnt look at my issue or get me an engineer and that I needed to speak to broadband guys. But every vain attempt I just kept being put through the system and recycled to a new CS rep in the phone team. Eventually I was put on hold for almost an hour, then cut off.

What is a consumer to do when I cant even get a straight answer out of the company who is supposed to be providing me a service?

How can I get in contact with somebody who can resolve my issue without spending hours of my time going through the same hoops each time?

If you have never been able to get above 10Mbps with Infinity 1 changing to Infinity2 would not resolve the problem. The maximum speed for any Infinity product is governed by what your line can support. As you were not reaching any where near the maximum for Infinity 1 you would never reach infinity 2 speeds.

If you have a Homehub 5 can you also post the stats from 1-12 by logging onto the homehub management pages then troubleshooting > helpdesk. http://bthomehub.home/

See graph for speed over distance. Infinity is VDSL2

welcome to the forum

Thanks for coming back to me. Yes I guessed that upgrading to infinity 2 wouldnt make much difference but it was a last gasp attempt, and seeing as it meant I could upgrade my homehub3 to a homehub5 i gambled maybe that would make a difference.

I know theres a fault somewhere up the road, its just getting the right person to get out and fix it. I cant afford to take days off work to spend sitting around for people that dont show up. 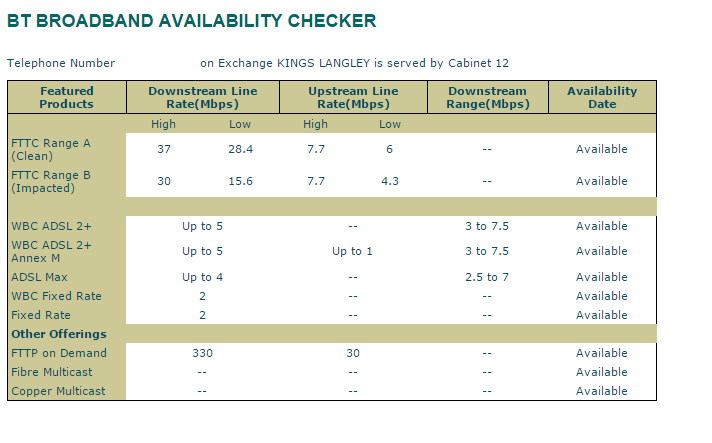 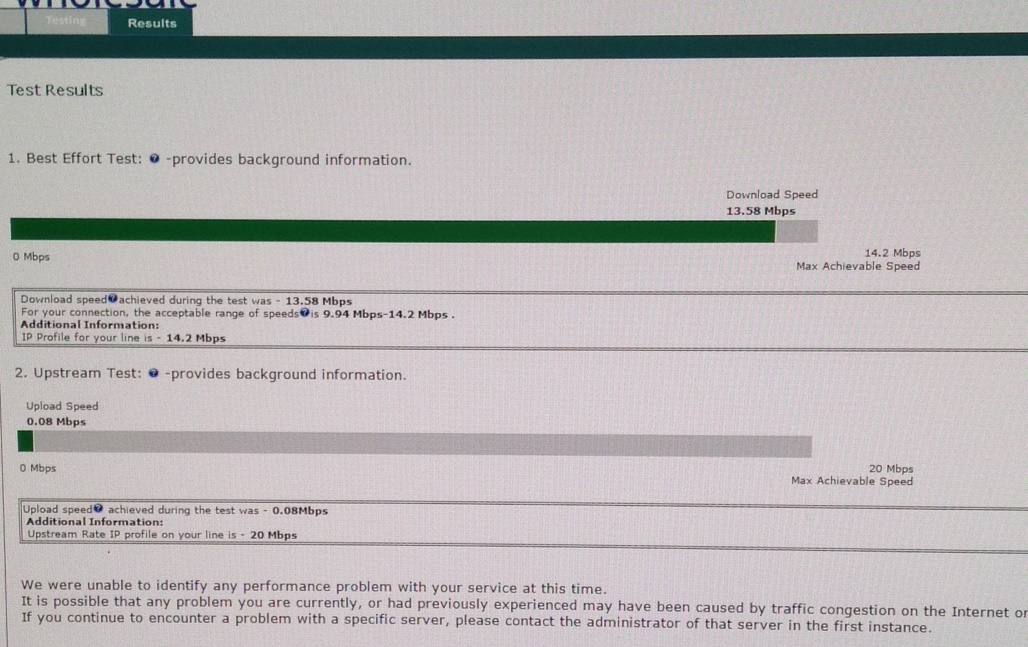 Welcome to the forum and thanks for posting.  I'm really sorry about the issues with your BT Infinity speed and the problems you have experienced with us while trying to get this resolved.

Please use the 'contact the mods' link in my forum profile to send in your details and we'll be happy to help. You can find the link by clicking on my username.

As you have now been offered the help of a moderator you will hopefully get this problem resolved by them.

Thank you, I have used the "Contact us" function and filled out the form. Hopefully we can get a resolution