I seem to be suffering from constant packet loss since switching to Infinity last year.

I've just moved home, and getting the same problems. Here is today/this week 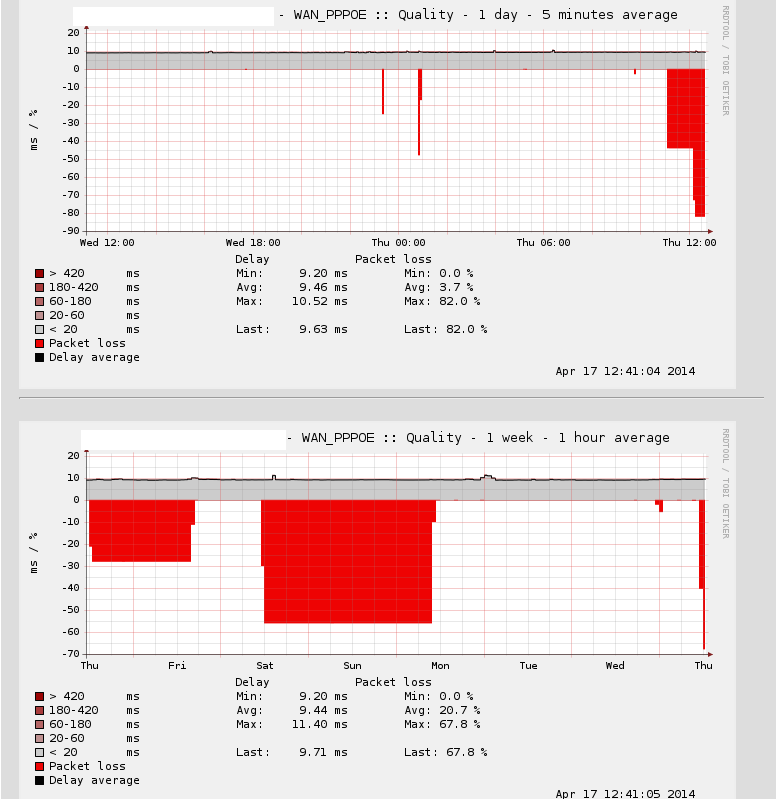 And this is since last year. I have highlighted where I switched to Infinity. pFsense randomly likes to stop recording it seems. 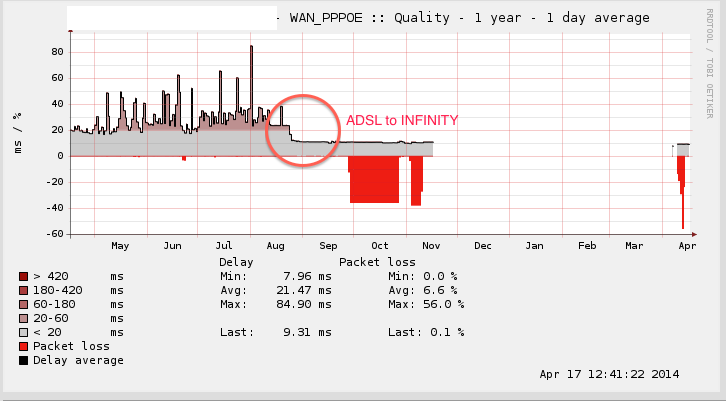 Any ideas on what this is all about?

first of all, nice choice of router/firewall btw 🙂

VDSL "infinity" user a much wider/higher spectrum of frequencies do deliver the internet, so it's quite possible that the VDSL has higher packet loss due to deficiencies in the line.

Because your'e using pfSense, I'm assuming your using a VDSL modem to bridge the PPPoE onto the pf box's WAN interface - can you get any line statistics from that modem?

Thanks! It runs on one of those Alix boards too so its low power 🙂

Yeah I understand it uses more frequencies, hence the higher speeds. However I'd like to think that the line shouldn't be adversely affected as this is a new build property in the last 3 years, with Cat5e between me and the box albeit next to a traffic light control box.

I'm using the ECI openreach modem to bridge between me and the internet yes, however I can't get any line statistics out of it unfortunately. I might have to look at hacking it as I don't know if there is a plugin/feature in pFsense to do this.

The BT Wholesale tester tells me I was syncing at 77mbps down and 20mbps up earlier today.

By default I think the Pfsense box will use the next-hop IP into the ISP (the default gateway supplied by them) I know it could be manually changed by editing the XML, not sure if the current versions allow you to tweak it. I think I used to get mine to ping a VPS, or failing that, one of the Google.com IPs (though that may not be a good idea, the dig lookup could go out of date as time progresses. I did this to get an indication of loss through the ISP core. Anyways, I digress.

wel, 77down and 20 up seems pretty good, if you had a lossy line, I'd expect that speed to have been reduced somewhat to combat the loss. I wonder igf the IP it was pinging "wasn't there" for a whie, meaning it had used the ISPs netx-hop gateway, but subsequent PPP renegotiations had changed it and the pfSense handn't updated it.
The loss seems to me to to be too "angular/blocky" to be occasional loss, at least in Oct/Nov. The April loss is more "dynamic" though, in profile.
It may be that whatever the PFsense box was pinging wasn't replying, due to being busy, or just quirky. Constant 30 or 50-60% loss seems a bit odd though, unless it's something to do with a faulty LAGG within the backhaul/spaghetti somewhere