Infinity when it rains, or lack of!

I've had 80k infinity for just over 12 months, After initial issues in the street cabinet and a new master socket being fitted everythings been running smoothly with good upload speeds. OPne day last week I was attending on an online meeting (I work from home) and noted the line dropped, when I checked the HH5 it was reconnecting (orange flashing and then blue). I noted that it had just started raining so put 2 and 2 together. I had previously noted slow speeds in rainy periods, my usual connection on the router showing as >72k down and 19.999k up during dry periods, this time it had reconnected at less that 60k down and 15k up.

I called BT 150 and reported my finings that I suspected it was a cable fault (I'm an engineer by trade), the opperator asked by to reset the HH5 by using a paperclip on the switch at the back although I asked if I could not due to my home network routing setup. In the end I relented and reset the router (wiping out all the previous logs). After a reboot the router conencted at an even lower speed. Operator then decided to arrrange an engineer call the following day between 3 & 6pm.

At 9:30 kevin turned up with an old handset, his iPad and a scrap bit of paper. He connected his handset to my line to then exclaim the phone line is OK. Which I confirmed it was but the issue was speed related when it rained. He connected to my router via wifi and run some diagnostics and confirmed my speed was below the advertised speed and he would report back tot he office that the issue was line related.

Since then I have been promised 2 fix dates and just had a call with a rather rude operator on 150 saying I will have to phone back when the issue happening to investigate and it will be fixed when its fixed.

For everyones information the HH5 is connected directly into the master socket.

Thanks for your post and welcome back!  Sorry for the problems you’re having with your BT Infinity service.

I understand you’re having problems with your connection during rainy weather and intermittent issues can be a nightmare if I’m perfectly honest!

Can you enter your phone number here and post back the results?  Please remember to remove your telephone number from the screenshot before posting.

Which Home Hub are you using?  If you’re using the Home Hub 5 can you also post the stats from 1-12 by logging onto the homehub management pages then troubleshooting > helpdesk?

Doing the above will give us an indication of how your service is performing against your point of sale speed.

I realise you’re having problems during rainy weather and that you may have did this before I just personally need to eliminate everything before going down the route of an engineer.

Please reply with the info I’m asking for and we will take it from there.

Where was the Engineer from, Openreach don't issue their Engineers with iPads.
0 Ratings

See my results below, Its been a day or so since the HH5 rebooted for some reason, before all this I would be connected at 76k down and 19.999k up  now I got these results 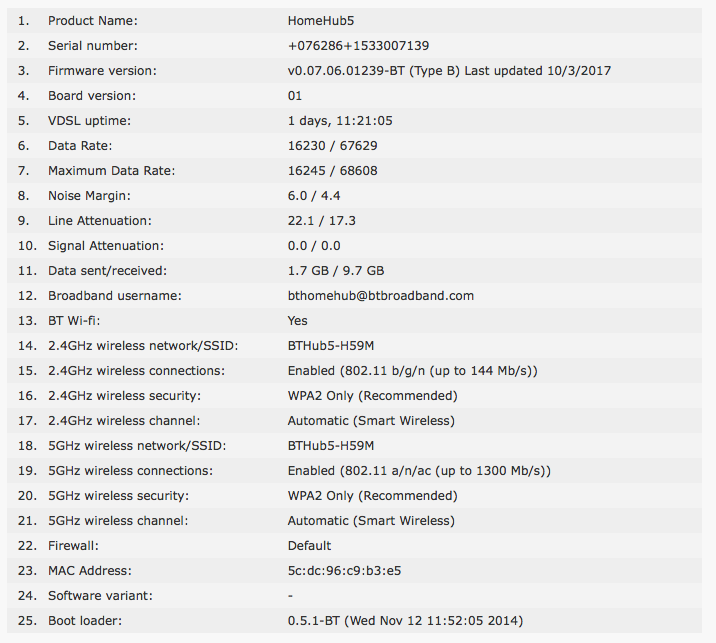 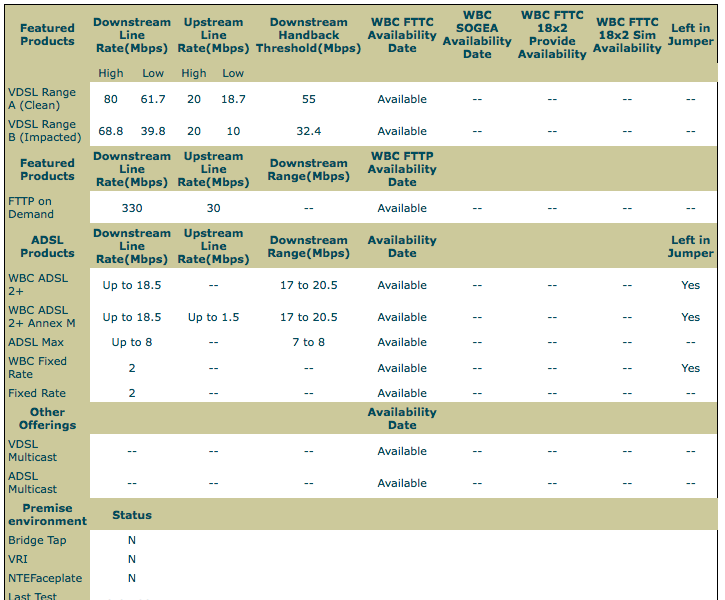 Hi, I dont know to be honest, He looked to be generally unwashed. Not professionally looking at all

Either way, you're well within the estimated range if speeds for your line so unlikely to get an Openreach visit.
If you want to say thanks for a helpful answer,please click on the Ratings star on the left-hand side If the the reply answers your question then please mark as ’Mark as Accepted Solution’
0 Ratings

It's a shame it disconnects when it rains though and reconnects at a lower speed. We have no reason for 5 days here. I know. Unheard of in Wales
0 Ratings

'Hi, I dont know to be honest, He looked to be generally unwashed. Not professionally looking at all'

A lot of Multi Skilled CSE's do. On one job they'll be pulling cables through dirt and mud filled ducts and joint boxes and remaking cable Joints using grease filled cable then the next job they'll be sent into someone's house to fit internal cabling/sockets.

It can be a dirty job, especially if you live work in rural area's.

People shouldn't be up their own **bleep**, you have to be nice to Telecoms Techs/Engineers because without them everyone else wouldn't be able to, "Work in I.T."

He didnt turn up in a van, but a car. He had no ID on show until I asked. had a very creased white shirt with no BT or open reach logo. had an 80s handset an iPad and a battered bit of paper. He had no overalls or workwear i could see. Hence my comment

What does it matter how the person looked or what company he works for. The OP has a contract with BT and it is up to BT to sort out the problem. It is irrelevant to the OP who BT use to fix the problem as long as the problem gets fixed.