I upgraded from Virgin Media to BT Infinity 2 package because a lot of friends had recommended it was great for online Gaming. The package was installed at the end of September and I cannot have any complaints with the customer service and general internet usage so far. My internet has been fairly standard with a weekly average of

My home setup is the default openreach modem with the home hub 4 router. My Xbox is connected directly to the router via ethernet. Two laptops and 1 andriod device are connected to the 2.4ghz wireless on the router.

I play a variety of games including Battlefield, Guild wars, starcraft 2 but my main game of choice would be Fifa. I have noticed no lag on any of these games except Fifa, especially on the P2P modes including H2H seasons and Ultimate team. My players literally cannot move or turn and it takes a few seconds to select players, making the game virtually unplayable. There is no screen jump or lag, just a constant slow responsiveness.

Things I have tried ( in different combinations) :

5) tried the xbox using Upnp with static IP on xbox, Putting xbox in dmz, using the Xbox with port forwarding setup for all EA known ports on fifa, tried using the Xbox on automatic settings.Tried these all individually and in combination ( same problem)

6) I have tried 4 different DNS settings on the xbox including 2 BT ones, Google DNS and Open DNS ( same problem)

When I run tracert on EA's main fifa servers (easo.ea.com) I get the following : 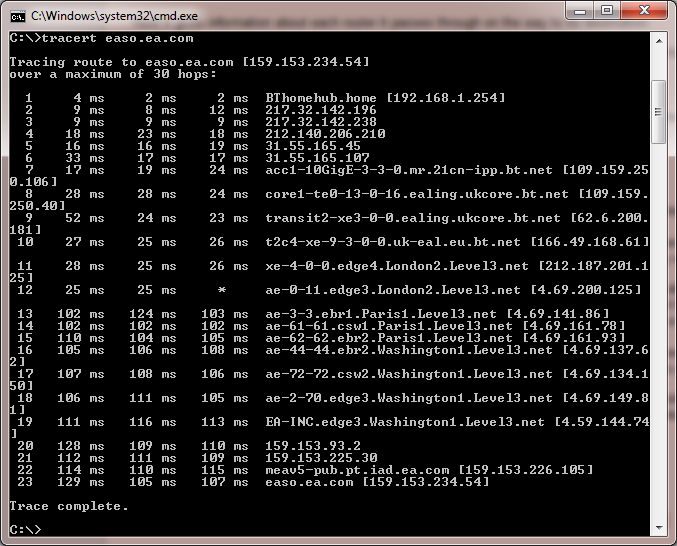 Obviously from this I can see that there are a large number of  >110ms results on various nodes to reach the final destination. Can anyone help me decipher if this is the reason I am lagging and if this is a BT fault or simply the locations of EA's servers?  I was under the impression EA has a UK server for Fifa after consulting EA forums so I am wondering why BT is sending my packets to the californian servers?

I find it strange that Fifa simply does not work on BT infinity as I have read on other threads here. I have played Fifa 13+ 14 at various addresses in my City of dundee including one on BT infinity of a friend and have never once experience delay/lag like I am experiencng at the moment.

Thanks in advance for help/tips.

There are a number of posts about this problem with Fifa and EA games. There does not appear to be any one solution. If you do a search of the forum you will see what others have tried. There are too many to repeat here.

I have searched for other threads and most ended with the mods asking the poster to contact them.

The only way BT realises there are problems is if people keep posting about them so Ill keep going here for the moment.

I have suffered from this problem for well over a year now and it is the same problems as you but I do get lag aswell along with stuttering gameplay. BT did 'thorough checks' and said there was nothing wrong with my line whatsoever. I have contacted EA and they say they don't know what the problem is. Some people say it could be a corrupt file/gamertag or psn and I have even seen people say it could be a problem with the slim xbox and slim ps3. I have tried everything and it is still the same. I played early access of fifa 14 and it was the same so I haven't purchased the full game. I want to contact watchdog but I have no idea what to say in terms of the problem because nobody knows.

From the trace it looks like it has nothing to do with the BT servers, as it starts getting higher latency from the paris servers onwards.

Then it hits Washinton in the US at about 106ms [not bad],at the EA server it is routed through the 159.153 servers then on to another EA server and finally it reaches the EA game server.

But those pings are not that bad considering the distance you are from the server which appears to be somewhere in the US.

I join an online racing league in the US East coast and my latency is usually about 120ms from the UK,not good but the greater the distance the higher the ping I guess.

It looks like you have had some interleaving added to your line though,fastpath is better for gaming,but that is set by the DLM and out of our hands unfortunately.

Same problem as of October. Will not be renewing my contract with BT once it expires. Warning to all gamers who play on EA servers... DO NOT GET BT INIFINITY

I've heard people say they have changed ISP's and it still doesn't make a difference so who knows what is going on.