Hi John46. Ive taken your advice and refrained from contacting BT. My last contact with them was on the 1st of September when I emailed them asking to get in contact with me. They still haven't got in touch with me, so I guess I'll leave it at that. Thanks once again for all your help John46.

Just a quick update on my situation.
Spoke to a nice Irish lady from BT named Claire and she sorted a few things out and I finally had BT Infinity installed earlier this month. Today I Recieved a bill for £130 for line installation despite having an email off BT when I first signed up saying that line installation was free. I also had a look on BT's website and it says free line installation for anyone taking out a broadband and tv package. Oh dear!

Didnt think I'd have need to use this forum again, but here is another update. The nice lady from BT sorted out last months over charge of £130 for me. I checked my bank account the next day and sure enough BT had only taken out their £15:99 instead of £145.99 that they had wrongly billed me.
Earlier I had my 2nd monthly bill from BT, this time for £96:52 instead of the £15:99 I signed up for. I checked the bill for phone use, and that was only £1:53, I'm no mathematician but I worked this out to be - £17:52. Ive just emailed BT and Im awaiting their response. Does anyone know if I can get out of this contract?
For anyone thinking of signing up with BT, then I urge you to think again. Its been a total shambles from day one (read the start of this thread.)

Hi Umpire.
Here's a rundown of my bill.

So to me it looks like the bill covers the following? 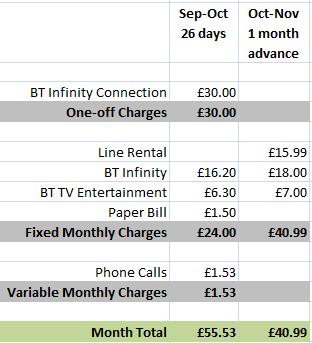 You always have to pay a bit more initially because of two reasons.

(1)  Any one-off costs such as a broadband connection charge.

(2)  You have to pay the advance fixed charges for the next month as well. These always work a month in advance from here on.

So your bill is almost covering two months' worth of services but with a few things to note.

(a) It doesn't include line rental for Sep-Oct. I assume this is because you have already paid that as you mentioned in earlier posts.

(b) It includes a £1.50 paper bill charge. If this is incorrect then you might need to chase that up.

(c) Obviously they don't know your Oct-Nov calls yet as they can't see into the future, so those are always charged a month behind. You will see those on your next bill.

So to me it looks like you have signed up to a Phone+Broadband+BTTV package that has fixed costs of £40.99 per month (before any possible Dec price rises) which will always be charged a month in advance? Is that what you thought you had signed up to?

Note that the BT Infinity @£18 also includes free weekend phone calls. That's why BT refer to it as a 'Broadband & Calls' package on your order confirmation and bills.

Note that for BT Infinity 1 there is a £30 connection charge. For the more expensive BT Infinity 2 it is usually waived.

Note that there is also a £35 activation charge for BT TV, but if you order it at the same time as broadband then it is usually waived.

I don't understand charges on my BT bill

Thanks again for your help, Umpire. This is a copy of my contract that BT emailed me.