I bought a new Linksys X3500 to replace my old Home Hub 1 but I keep getting errors with it. For some reason, it keeps dropping the connection. It happens for roughly about a minute each hour.

At first I thought it was my internet line so I plugged in my old BT Home Hub but that was working fine.

These are the settings I have on the router 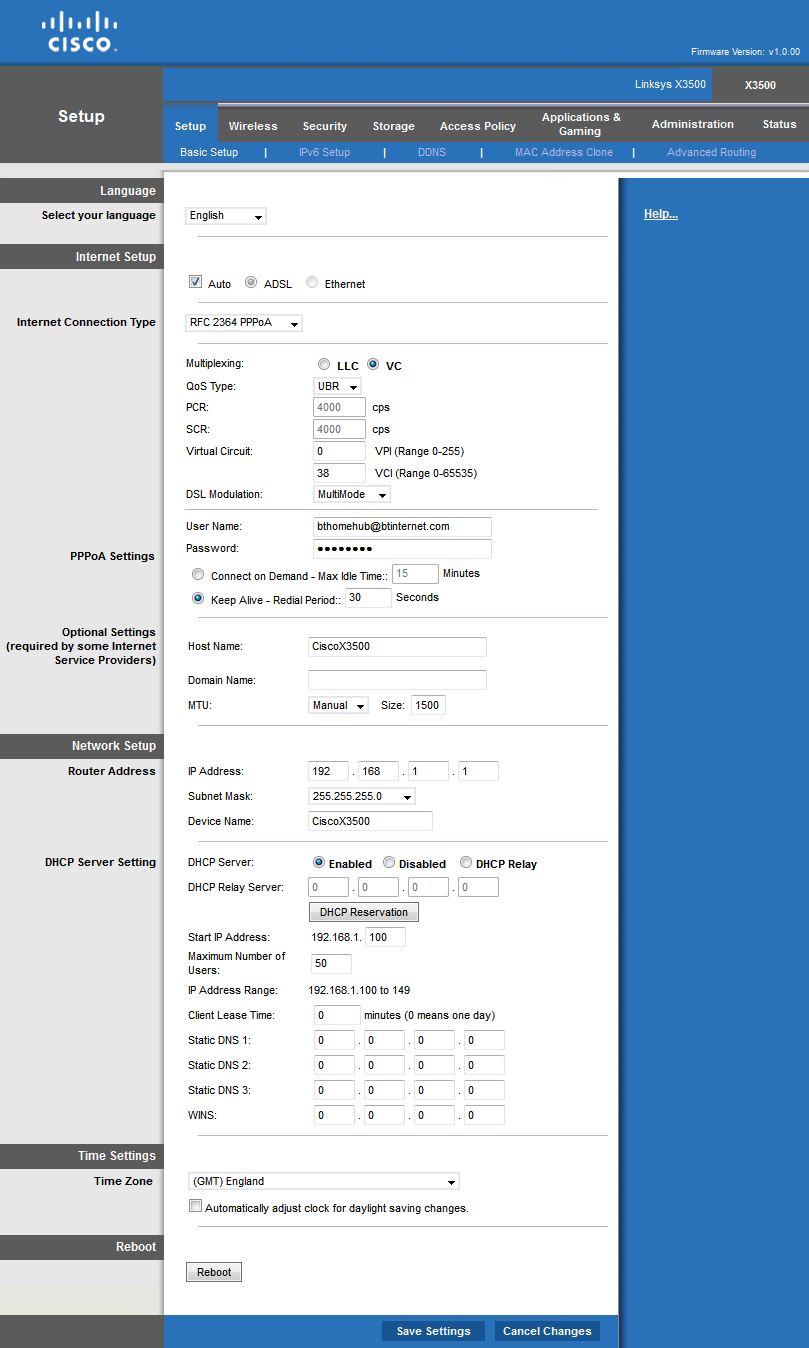 Any settings wrong on it? It's quite annoying. I contacted the BT helpline and the only thing they said was to use my old hub or buy a new one. As I just spent £90 on this one, I think i'll use this one.

I have been having a very similar experience.   Changed from a venerable BT Voyager 2110 to a Linksys X3500 about a month ago simply to get better coverage around my (small but surprising wifi impermeable) house.   Since then I have had loads of trouble.    From dropped connections, router freeze-ups, and very low bandwidth connections.

The reduced bandwidth turned out to be due to the local exchange equipment dropping my line speed down, probably after the X3500 had suffered another of it's grande mal episodes.

As soon as I put my ancient BT Voyager back in circuit, the problems all disappear.

There doesn't seem to be much forum activity on this, which makes me think either I'm doing something wrong or else I have a faulty unit.   But I did read, on an Amazon review of all places, that flashing the box with the only other firmware version available from Cisco, build 18, can help.

I've just done this so I'll see if it makes a difference today.

I'd be interested to know if you have a breakthrough yourself.

I tried a linksys router before but I found the wireless signals to be shocking compared to other manufacturers. I was getting double the signal strength from a BT HH 4 doors away than what I was getting from the linksys in the next room. Best thing to do is find some reviews on the internet before you buy anything. Most companies producing consumer routers seem to be a bit hit and miss. I had a great netgear I had for work and it was amazingly stable and wireless was great throughout the house. But then we were given one by orange for home connection and it was an absolute pile of crud. Are you in a position to recontract with BTyou can often get a HH4 for free? I've got one and its done everything I want it too. Granted stuff like QoS etc might be nice but not an absolute must have!

I did read quite a few good reviews of the Cisco/Linksys router before buying, which makes me puzzled as to why my experience is so bad.