all BT are "responsible" for is the link from your home to them, their own internal routers/servers, and to a lesser extent their selection of a good backbone provider (above.net) for onward routing. what happens past that is entirely out of their control.

so unless you can show a problem occuring within BT or above.net it is unlikely to receive much attention. you can as an individual pester ea game for example to provide something you have paid for that works

Do you work for Bt ? And if Bt didn't think it was there problem at all they wouldn't have opened it as a fault.

But I was posting a traceroute etc becuase a Bt employee on the thread said for people to do so..

no i don't work for BT - it was opened as a fault becuase there was packet loss occuring quite bad for a few days. but recent posts today do not show this problem still exists that is all i'm saying.

i'm also trying to point out why these recent posts today showing pings and tracerts are not showing any problems and the reasons why when you are listing timeouts and packet losses.

if the server you are pinging has been blocked for pings they will show 100% packet loss if you do a simple ping even when everything is working 100%. if you do a tracert on one of these servers and it shows problems withing BT or above.net then that is valid - but at the route end you will show a timeout becuase that server does not respond to pings. many servers on the web block pings, including BT.COM 🙂

i can see bt.com from my browser fine - but if i ping it i get:

it does not mean there is a problem, just means the sever has blocked pings 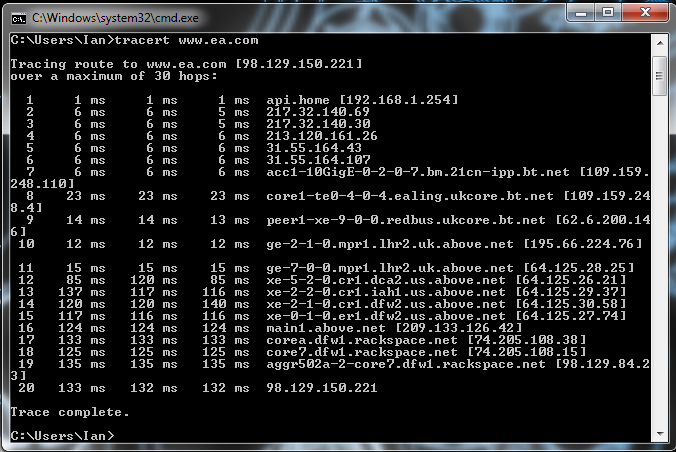 Its been good for the last week great!!!

This is when it was bad below 5/8th October

Same experience as the rest of you. Problems seem to be back during peak. So tired of this. Timeouts, high latency, throttling, call it what you will. It seemed to be back to normal from the beginning of October but the past few days it has returned.

edit: I'd like to point out that though those latency charts can represent faults well, they can also be hardly scientific since BT will know about the majority of those services (such as speedtest.net) and provide better routing to them.

I suspect it may be contributed to congestion at your local cabinet and/or your exchange. Eventually BT will fix it if they notice that the majority of users on your exchange are experiencing speed problems, however, BT still do not class packet loss as a fault (why, I don't know).

This is what it looks like for me when the latency starts spiking seemingly at random. Usually during 12pm-10pm but this night it was even happening in the early hours. If that is not your average packet loss related to the undersea cable going down in September, or whatever the du jour excuse is, I would love to know what it looks like. From a user standpoint it is latency rising to 1000ms, and staying there for a good ten seconds at a time before returning to normal, around 80s for a short period, before it does it again. If you're browsing the web it's like being back on 56k with images and videos being very slow to load, if you're watching streams they buffer, if you're playing games you get a 1 second delay in input response. Tell me that is a problem I can solve by talking to an engineer about my line and I'll do it...
0 Ratings
Highlighted

It's 10pm in the evening and this packet loss and high latency spiking is still happening. So tired of this. telehouse dragging everything down as per usual.

Can you send in your details so we can get this investigated further? You can find our "Contact us" link by clicking on my username.