Must Read: BT Infinity (No help from Wholesale and Technical Help)

I am here to resolve an issue which neither the BT Networks Fault (Level 2) or the wholesale team even want to look into.

I am a paying customer of BT and have been for many years; however, it’s come to the point where BT are leaving me no other option but to leave them.

Issue: 1 week ago, had an issue with Telephone line. No ringtone, Openreach engineer visits and solves the issues. Profile is downgraded to 39 all the way from 79. Upon calling Technical Helpdesk several times, they simply stated that it was the highest my line could achieve. You don't want to know how frustrated I was, had to call them 6 times and each time the call lasted over 40 minutes.

Tier/ Level 2 team from Networks Fault looks into this issue, promises call back twice, then I had to beg Level 1 to transfer me to Level 2. Anyways, engineer is booked (not for a boost job), for the 15th of this month. I was told that the engineer didn't need to come as he had to work on the local cabinet/ exchange. Since, no changes had been made and someone from Level 2 told me that they need to book another appointment, I went ahead and chose todays date.

19/05/2013 Engineer came, saw the profile drop and carried out tests. He replaced the cable from the main socket to the pole. The reason was that there was some sort of black drum shaped object outside of the house which he wanted to get rid of as it reduces line sound by 3-4 db. He was at all times explaining everything to me in a very clear manner, he also showed me that the maximum throughput our connection could achieve was 79000(estimate)kpbs. He spoke to the Wholesale department, wholesale clearly identified that this customers profile should not be 39mbps and changed it to 65. I asked the engineer whether if it would ever go up to what it was a week ago, he replied 'No'. He told me that us engineers can only work between A and B, from the cabinet to the socket, therefore have no control over what BT does with numbers. I understood that as he had a point to make, eventough I was losing around 11mb, I didn't feel like complaining as he had done a great job replacing the wiring outside the house.

1pm: I rang BT Technical department and spoke to Level 2 team. First, I enquired about whether if I was getting charged for the work engineer had done. He said 'No' as long as the engineer didn't say I wouldn’t have to pay, I wasn't satisfied so he got in touch with Wholesale and they said 'No' too. The first thing in my mind was cleared because I don't know why but I had this feeling that BT would want to charge me £99 as I said I would leave them if they don't raise my profile from 39 to how it was. -- I know wanted to discuss the main issue which was that why was the profile being limited to 65 when it was 79mb for a whole year. The person on the phone kept telling me that I should be happy, I should be satisfied and also said that he didn't want to contact Wholesale once again as he had just been on the phone with them. I told the person from Level 2 Networks Fault team that my line is not only capable of handling more than 65 but the maximum throughput engineer showed me was also 79000kbps. Not only he kept denying, but also kept stating that at no point were BT breaching the contract since when I signed up the advertised speed was 61. I made it clear to him that I don't care about that, all I care about is getting my profile to raise the way it was for a whole year. I felt like I was banging my head against the wall as he simply kept denying anything I knew or wanted to say. I asked to speak to his floor manager and he explained the situation to his manager. The manager likewise did the exact same thing I feared, he repeated that as long as I was getting what is being advertised they are not going to help me further. Upon telling him that I had a download speed of 73-76mb for a year, he refused to acknowledge that. I asked if he could call the Wholesale and simply raise the profile to 79, he said that there is no way that the line could even support more than 61. I repeatedly told him that I could provide proof such as screenshots of speed tests being carried out at the BT's speed tester which displayed speeds of up to 74 and the profile set to 79. Since, he couldn't help me, I asked to be transferred to the Cancellation team. Cancellation team told me that it would cost me £30 to cancel BT if I wasn't going to transfer to another company; I asked if the person could suggest different ways of me resolving this and was told only BT Wholesale could raise the profile.

The reason I am posting this issue on this forum is because every department has failed me, I wanted to give this a try, and so, I am. 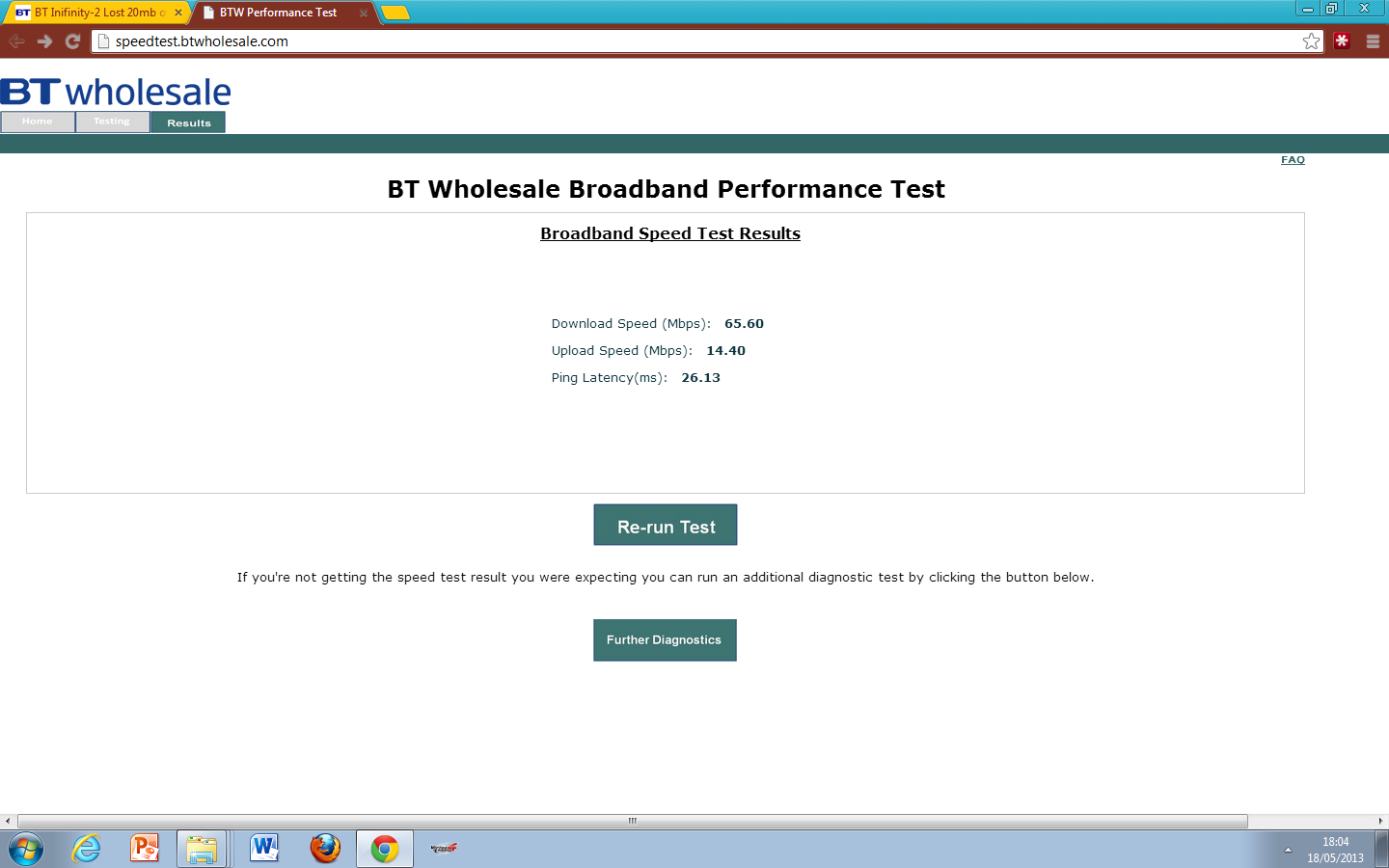 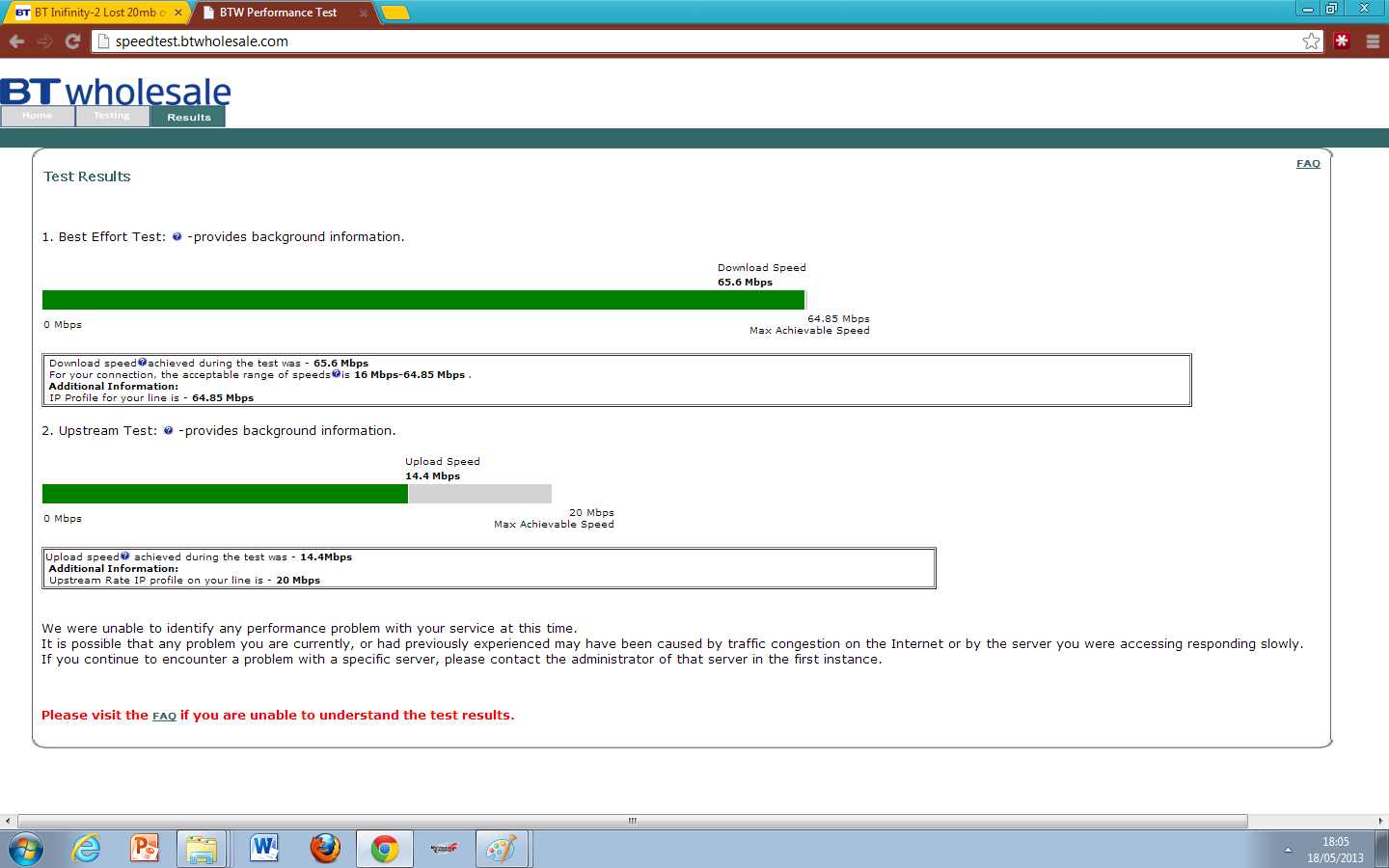 Here are two screenshots of the download speed/ profile. Please help me resolve this, if you require anything please let me know.

Go to solution
The profile should rise automatically.

Did the engineer show you the maximum speed your line should be able to handle on his JDSU?

What speed were you advised your line could handle when you first took out service?

What speed does it say is the maximum you can get now if you enter your telephone number into this page?

If someone answers your question correctly please let other members know by clicking on ’Mark as Accepted Solution’.
0 Ratings

It looks a pretty healthy result.  Not the best that anyone has every had, but not something to complain about; and something many people would be deligthed to be able to get.  They've clearly removed the main issue of a reduction right down to 39 or so, and you are still getting above the advertised speed ( when I signed up the advertised speed was 61).

Infinity lines quite often degrade over time as more nearby lines are enabled and crosstalk comes into play.  Just because your line was able to hold a higher speed for a time doesn't mean that anyone is contracted to keep that speed for ever.  That is why the initial estimate was not higher.

Go to solution
I am assuming that JDSU is the big machine he connects to the socket in order to Cary out the tests. If that's what it is then he showed me that the maximum throughput is 79000 kbps. I am 100% sure that my line can handle the speed the engineer showed me. All I am askingfor is the profile to be raised back to what it was. Everytime I am doing speedtest using the wholesales site the actual download speed comes out higher than what the profile is set to. I am begging here.
Nothing happens when I reboot the router, speed stays the same way. I am currently getting a higher speed than what my profile is set to.
You don't want me to complain about a 11mb loss in my download speed and sit back?
There is the engineer showing me 79mbps throughput, 1 year of download speed around 73-74 and today's download speed overlapping the maximum speed my profile is set to.
0 Ratings

Would the dlm be an issue if I was to switch over to Sky?
Lets say that I switch to Sky broadband, would the BT wholesale still have control over my line, in terms of my line profile and such. I don't want switch over, however, I can't sit in a corner and be told to let things just flow by. If an engineer can raise the profile by calling wholesale -from 39mb to 65mb- then I am sure this doesn't need to wait 2-3 weeks.

a connection by fibre optic is run through openreach no matter what isp you are using so no matter who you go with for a fibre connection you will have to deal with the dlm on your connection. with normal broadband only bt use the dlm for it but for fibre optic connections all providers have to use the dlm. if i am wrong about this maybe someone who knows will correct me

Go to solution
So, the only solution is for me to wait 2-3 weeks?
This still doesn't explain how the wholesale were able to change my profile today from 39 to 65?
I guess this is one of those cases where BT doesn't really care.
0 Ratings