Hi ryant704. I have taken your advice and contacted the mods today.
0 Ratings

Given that your speed is above your IP profile, I suggest you reset your modem and HH3 by turning the power off and on.

Do the modem off/on first, then do the HH3 off/on.

Finally, repeat the speed test you did to discover your IP profile.
--
To say thanks for a helpful answer, please click the white star
0 Ratings

Is it advisable to turn off the modem before the first 10 days are up?  I will certainly give it a try if it is OK.

You're ok after the 2nd day, but if you'd rather leave it just do the HH3. That should update your IP profile anyway.

--
To say thanks for a helpful answer, please click the white star
0 Ratings

I did just the HH3 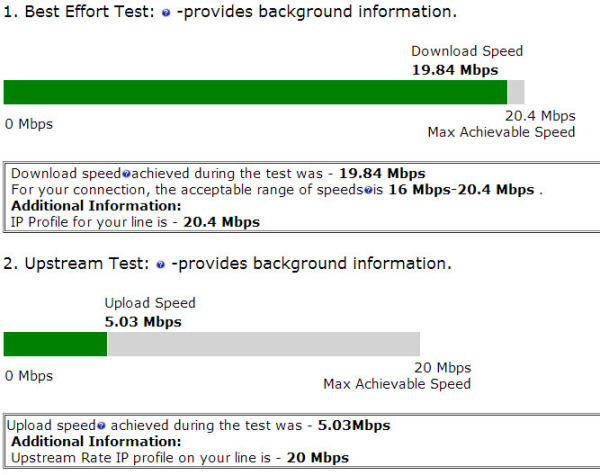 --
To say thanks for a helpful answer, please click the white star
0 Ratings

I power cycled both the modem and hub using BT's instructions.  The difference? not a lot.

I will wait until the mods contact me.   Thursday was my third Infinity appointment.  The first should have been on the 4th April but was cancelled by BT.  They said I hadn’t given them the MAC code, yes I had.  Then they said the MAC code I gave them was wrong, it wasn’t.  Next appointment was for Monday April 8th.  A BT engineer duly arrived, he fixed the modem to the wall and replaced my ADSL Nation face plate with a new one.  There was no signal at all coming into the house. He said that was a first for him, he’d had many very low signals but never nothing at all.  He had to go back to the green box and reinstate my Bethere broadband and BT phone.  I was told I would be given an update on Friday 12th.  On the 11th an Openreach engineer was passing so knocked on the door.  He said there was nothing wrong with the fibre line although he didn’t test the line to see if anything was coming into the house.  He suggested it was a sync problem at the exchange.  I got a call on Friday12th telling me futher enineering work needed doing on my line.  I would get a call on Tuesday 16th.  I did get a call on the 16th with a new install date, the 26th April!  I asked if BT thought 3 working weeks between appointments was acceptable.  She said yes they did.  Well I didn’t think it was right and she eventually agreed with me to expedite my next appointment  She called back with Thursday 18th, the rest you already know.

No change with the speed I'm getting but here's todays new test result.

The Exchange to Homefigure has changed from zero to 20.9mb 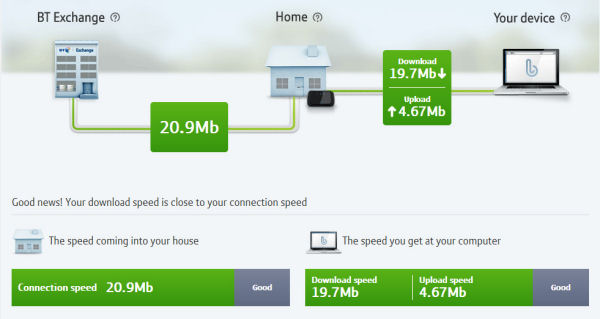 A colour change for todays speedtest and a Poor rating which is something I already knew. 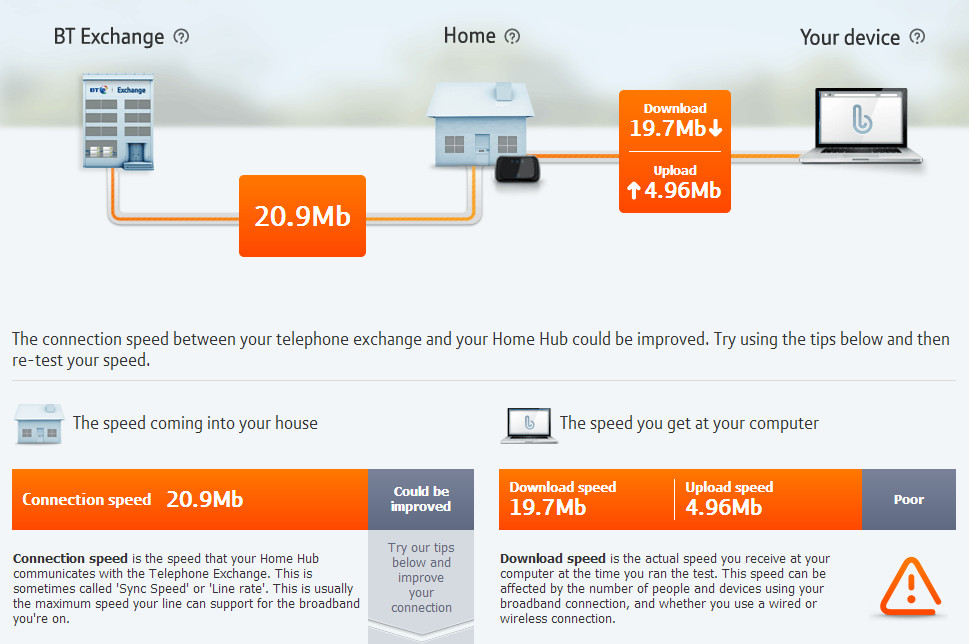