I've had Infinity 2 speed and connection issues since Jan and three supposed fixes, the last involving a BT engineer visit to my premises a couple of weeks ago. That appeared to remedy things, but the line still drops at least once a day (an improvement over the dozens previously) and today upload speeds are half what they were – 8Mbit rather than 16Mbit. Download speeds are fine.

This morning I called BT on 0800 111 4567 for the umpteenth time, only to be *now* told that since I don't use a BT hub, they can't help. This has *never* been an issue before and I've never used a BT hub – the two I've been given have never worked relaibly (I spent a week or two testing one with BT to establishing the last one was a dud). The Apple Airport Extreme router I do use (with a separate BT modem) has performed faultlessly since 2012.

So I've reached a dead end with the usual BT support channels. Having previoulsy met with much more success with BT broadband support through these forums in the past, I thought I'd try again. Does BT still respond to posts?

You can get help here from BT, but first you will need to get help from forum members. If they cannot resolve the problem, then it can be passed to one of the very small team of forummoderators.

Which one of these matches your master phone socket?

Do you have any extension wiring?

Upload speeds are still broadly in line with that (interleaving was recently enabled to address the diconnection issues, according to an engineer, which I'm told reducled dl speed), but upload speed is currently ~8.5Mbit – so half of what it should be.

The master socket is the fourth on than list, with no extension wiring. It was also recently checked by a BT engineer, as was the line and local cabinet.

Can you post the connection stats from the router?

Just because they were recently tested doesn't mean they haven't gone faulty now 🙂
If you want to say thanks for a helpful answer,please click on the Ratings star on the left-hand side If the the reply answers your question then please mark as ’Mark as Accepted Solution’
0 Ratings
Highlighted

Interleaving would affect both directions, and would affect actual download speeds as it adds extra overhead to allow for forward error correction.

Could you please post the results from the http://speedtest.btwholesale.com/, including the further diagnostics, this must be done using an Ethernet cable.

Whoops, yes – DL / UL speeds swapped back there... I have no router connection stats, since I'm not using a BT Home Hub. 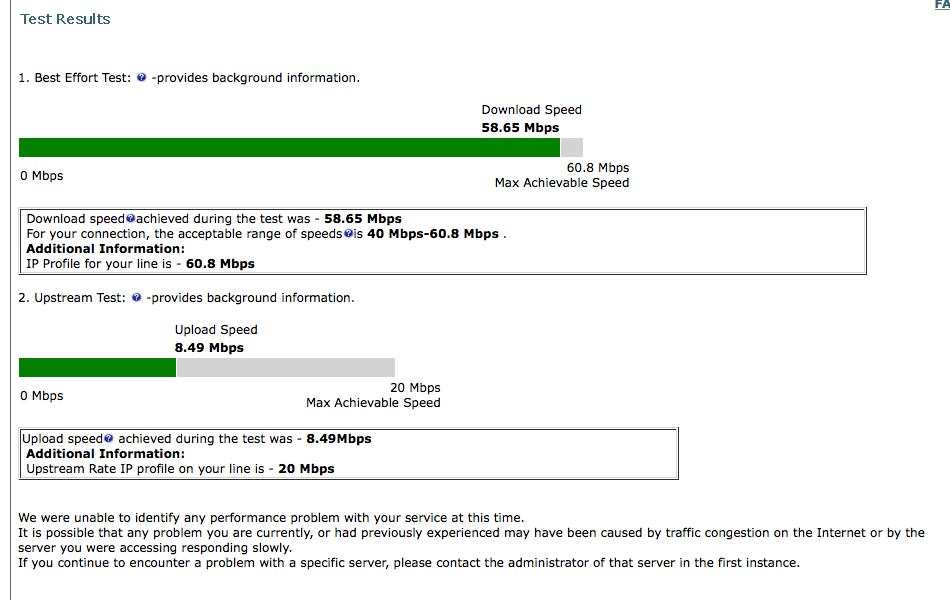 Hm, I appear to be back to normal after contacting online supoprt and getting through to someone who simply 'reset' the connection. So I guess I can class this one as 'fixed' – that's assuming it doesn't happen again in a few days...