I keep getting the message LAN cable disconnected on my wired ps4 connection, then a moment later it connects.

I connected my laptop with a short ethernet cable direct to my modem/router and tested with sourceforge speedtest and pingplotter. This is BT Infinity with a Netgear D7000 modem/router, tested with different cables 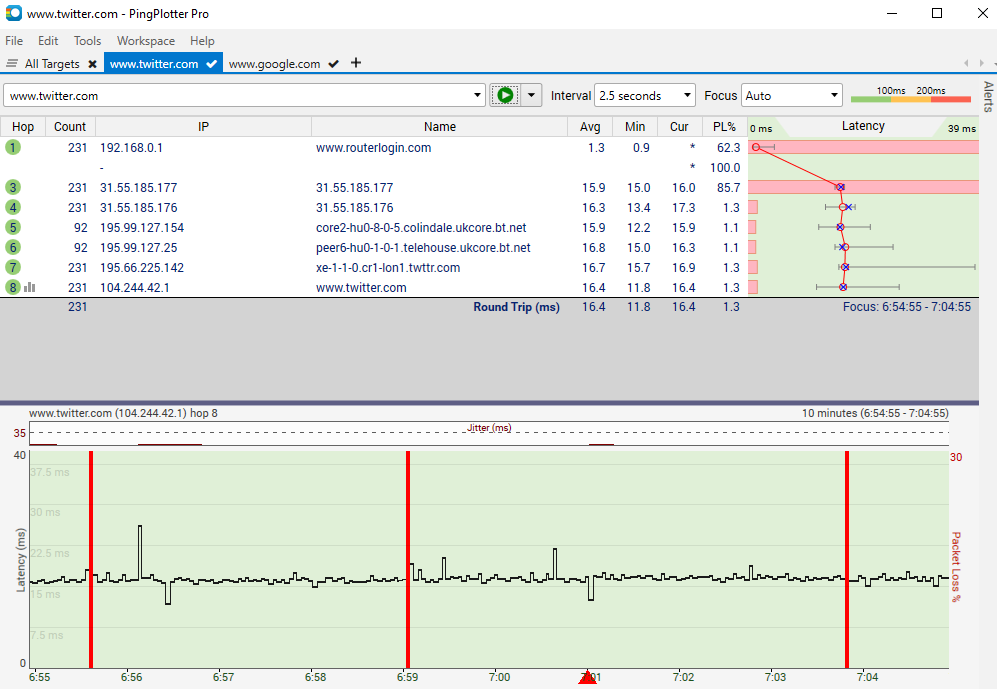 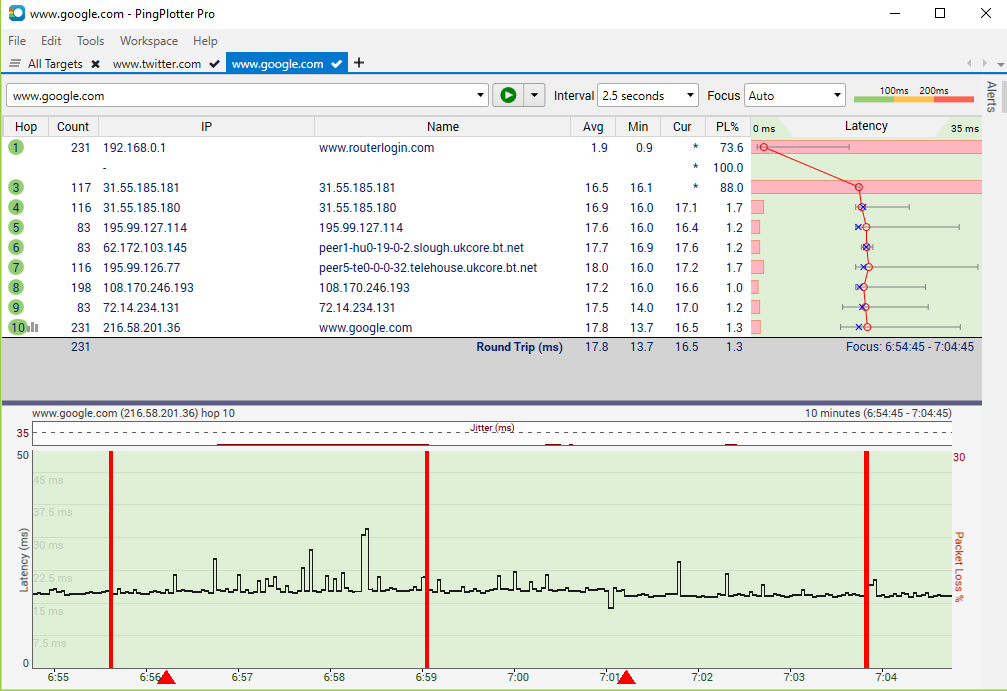 You have a small amount of packet loss (1.3%). Usually anything under 5% would not be very noticable in general browsing as TCP is designed to deal with such issues, however gaming (e.g. your PS4) and streaming will be likely be affected here. This could indeed be an issue with your line.

That being said, I don't have a PS4 but "LAN cable disconnected" implies there is a problem with the ethernet connection rather than the internet. I wouldn't expect to see a message like that just because of packet loss. Have you got another router you can try, e.g. your original HH, to rule out the internal switch on the Netgear?

Actually I just noticed that your average latency to the netgear is 1.9ms (that is very high, should be sub 1 second without any routing) with packet loss of 73%... this looks more like an internal LAN issue.

I'd definitely try a different router if you can.
1 Rating

Thanks, I just dug out my BT Homehub 5 from the loft and plugged that in. Same situation, only the homehub and a short cat 6 to my laptop. This time there were no red bars on pingplotter but the sourceforge speed test results were slightly worse (I'd use pingtest.com but it doesnt like my java for some reason) and latency to the router of about 1.5ms. Just out of interest I also tried it with my laptop where my PS4 is (router > 25m cat 6 cable > switch > 1m cat 6 > ps4) and the latency to the router is up at 3.8ms with 60% packet loss.

I tried the quiet line and I do hear the odd rustling sound every few seconds, very faint to the point I was unsure if it was just my ear rubbing against the headset but it is there. 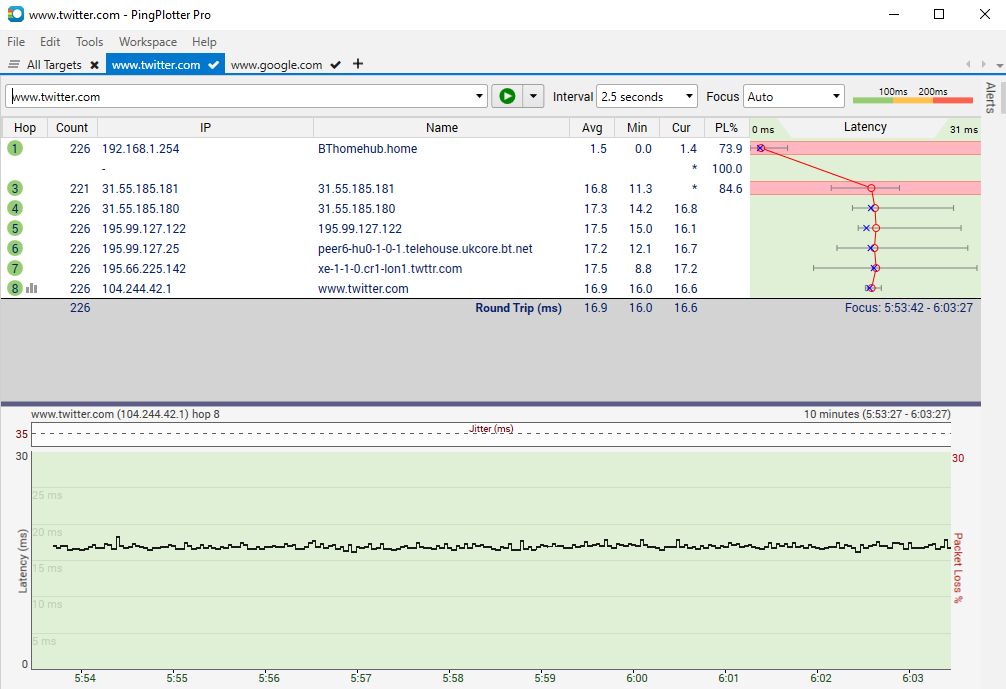 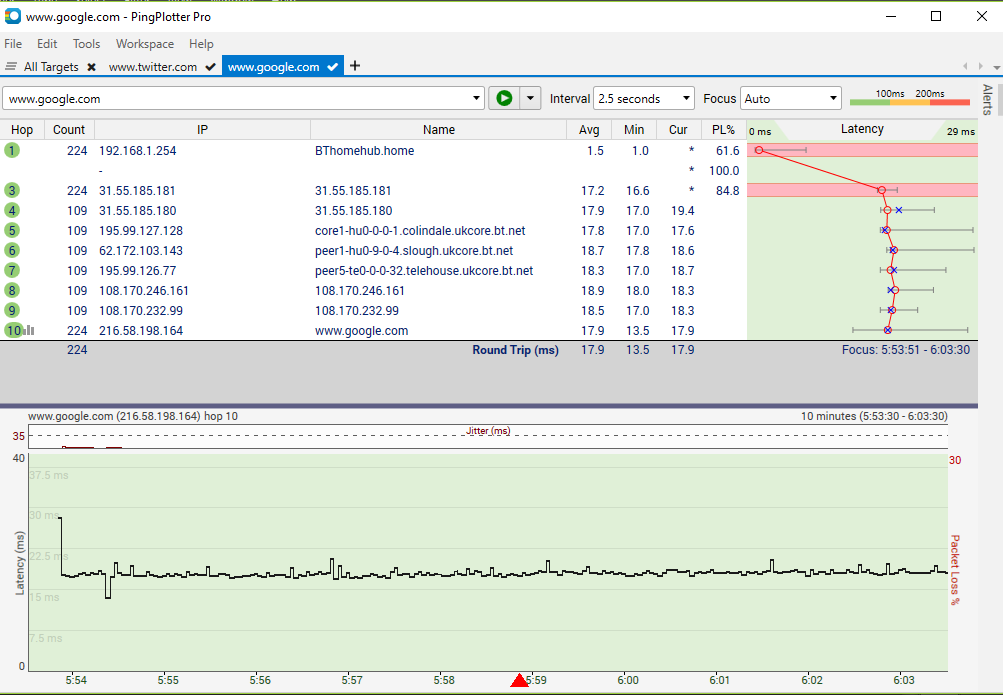 Check your TCP/IP stack settings at http://www.speedguide.net/analyzer.php? specifically check MTU is 1492 and TTL settings are ok. But my first thoughts are your local network ... are you using power adapters?
1 Rating

Can you connect to the hub using WiFi only and see if you get the same packet loss?

Hi, not entirely sure what my TCP/MTU/TTL settings should be but here is my results:

I repeated my earlier tests with wifi only 1 metre from the hub. The hub is connected directly to the mains. It seemed to give better ping on the first test but pingplotter results are way worse. 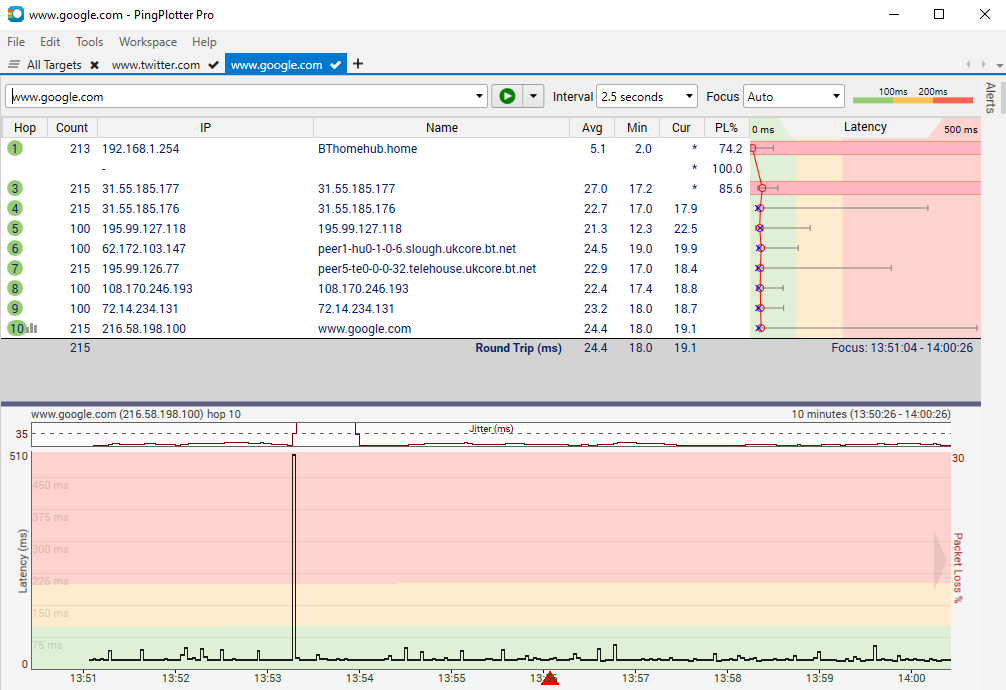 Not sure if you meant wired or wireless so I did both 🙂 First pic wired 2nd wireless, both right next to the home hub. 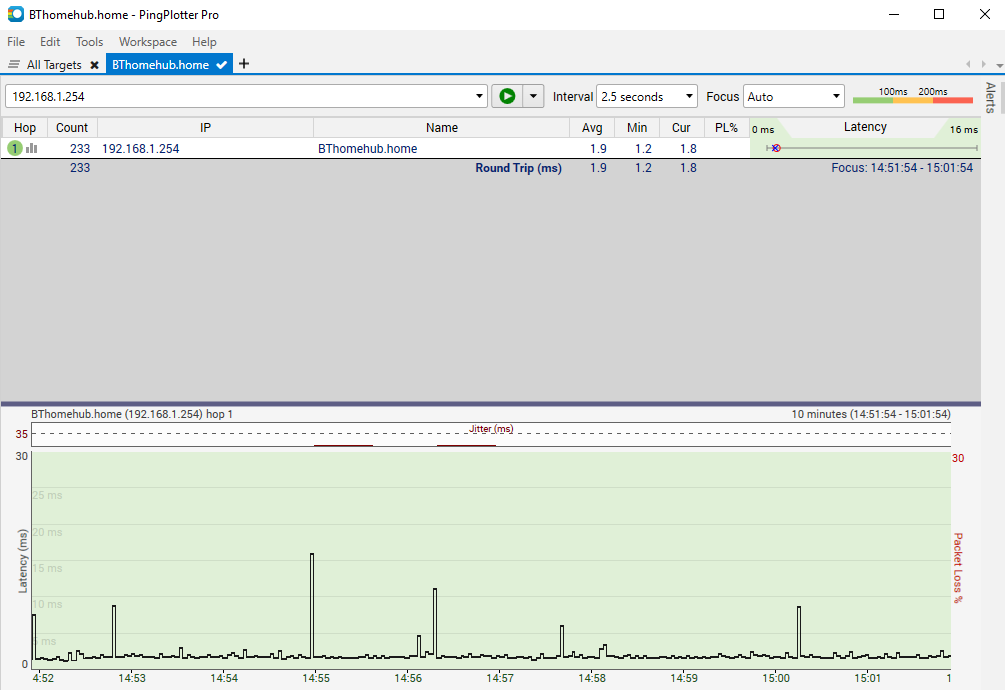 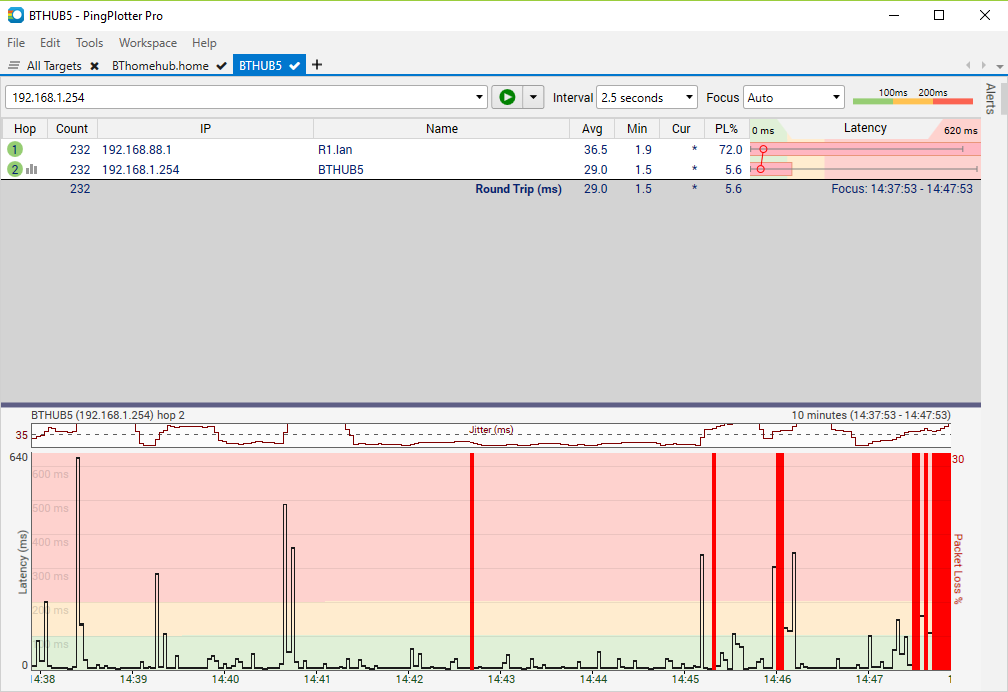 The wireless result is a little odd as it looks like you're going via another router or access point (with a 192.168.88 address). Is that the case?

Either way, from that last ethernet result it's clear that the homehub has some rate limiting of ICMP traffic (where the TTL is 0, which is why we don't see it when tracing to the router directly) - that explains why it previously appeared you were getting packet loss at hop 1. The 1.9ms average latency to the router over a single ethernet cable isn't great, but I don't think it's contributing to the problem.

Going back to your previous ethernet-only results, ignoring routers that are clearly rate limiting ICMP, all the PingPlotter results you have posted actually don't look bad apart from your very first post (where we saw the 1.3% PL on the final destination) so the question is how does the sourceforge speedtest detect packet loss, because I haven't seen any true packet loss since your first post (which was much lower than the 30% SourceForge was telling you).