Problems after upgrade to Entertainment Plus - No BT Sport & Order still showing as open.

I have just upgraded from Unlimited Broadband & TV Essentials to Unlimited BT Infinity 2 & Entertainment Plus. The upgrade went through as planned on the 8th September but true to form with all my dealings with BT since I moved house I'm having problems, which are as follows -

1. When I try to watch any BT Sport channel on my Vision+ box I am being told that they are not part of my subscription. It seems that the BT Sport Pack has not been added to my account even though it should be included for free as part of my Entertainment Plus package. I am also paying the extra £4 per month for the HD Extra service which also entitles me to the BT Sport channels in HD. Obviously these aren't working either. The rest of the entertainment channels included in the Entertainment Plus package are working fine in both SD & HD. My 'Entitlements' listed on my Vision+ box are PSB HD, HD Extra and All Entertainment Channels. There is also no mention of the BT Sport Pack on the My BT page (which I finally got working after nearly a month). I did try placing an order for the BT Sport Pack (which as a BT TV customer I'd get for free) but that just leads neatly into my second problem!

2. The package order for my broadband and tv upgrade is stilling showing as open on my account even though it was completed on the 8th September as expected. 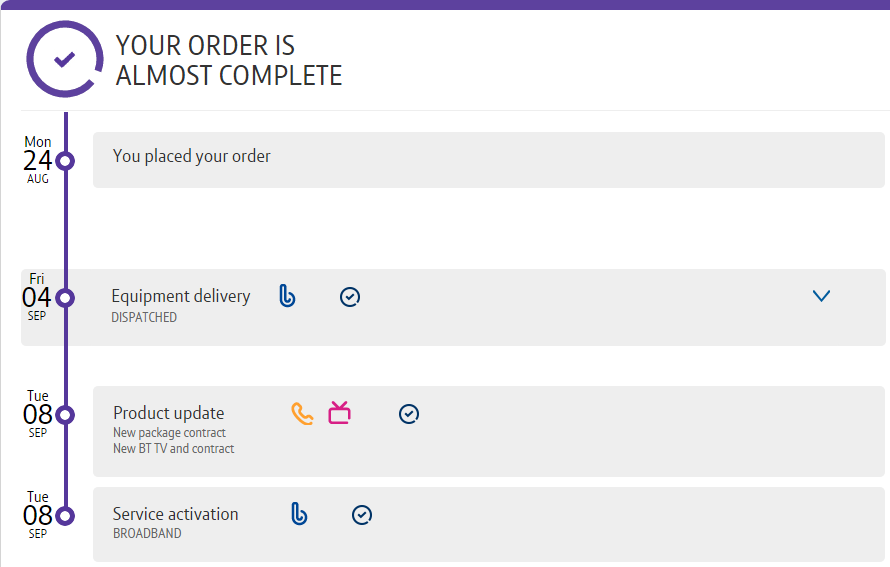 This is the exact same problem I had with my house move order (thread here) which delayed this upgrade initally. With this order still showing as open on my account I unable to make any other changes to my BT package.

Would a mod be able to look at these problems for me? You have been extremely helpful with the previous problems I've had since I moved my BT account to my new house, much more so than the useless call centre. That is why I've come here in the first instance. I would like this sorted asap as I'm at my wits end with BT now. Nothing is every straight forward and nothing seems to work first time. The primary reason I upgraded to Entertainment Plus and pay the extra £4/month for HD Extra was to watch all the BT Sports channels in HD on my tv and that is the only thing I am unable to do after my upgrade!

I am really sorry to hear about the problems you have had with your order.

I've dropped you a private message, which includes the link to our order team. You can chat with them online.  This order team is based in the UK and will own your complaint until everything is sorted out.

Should you have any further problems after speaking with this team please let us know.

I'll get in touch with them tomorrow when I've finished work. Hopefully I'll get my BT Sport sorted for the MotoGP at the weekend!

Quick update on this.

PaddyB put me in touch with a UK live chat team. Chatted with a helpful sounding bloke who said the data ingretiy issue on my account would be sorted today (14/9) and I'd have access to the BT Sport Pack. Woke up from night shift to a message on my answering machine from BT (that they would ring back before 8pm on the 16th!) and no BT Sport on my TV. After getting back onto the UK live chat team it turns out I should never have been told this would be sorted today and that it should be completed on Wednesday 16th. I sincerely hope so!

Never had a spot of bother with BT for years and years until I moved house. It has been one screwup after another since then. They are definitely consistant though as they never get things right first time. I'm not usually one for complaining as long as things get sorted in the end that will normally do for me but this has been 2 months of constant bother trying to get first my house move order, then fibre upgrade and now TV package sorted. If somebody could point me in the right direction of where it is best to lodge a complaint (preferable by letter) then I'd much appreciate it? I'd really like somebody high up in BT to realise how inconsistant their customer service is and the time I've wasted trying to get my account sorted. I'm not usually one for expecting compensation but I'll take whatever I can get after this.

Though to be honest all I want is to watch BT Sport in HD on my TV. I wait with trepidation to see what happens on Wednesday!

Not that anybody will be interested but I finally got access to BT Sport 12 days after my upgrade during which I had 6 chats with BT and numerous broken promises about when the issue would be sorted. Surprise, surprise though I get my first bill for my new package and they have charge me £5 for the BT Sport Pack when it should be free.

I have to compliment BT on being extremely consistant in that they never get anything right first time! Now I have to spend more of my time chasing up their mistakes. Awesome 😉